President Trump Is Right On Afghanistan 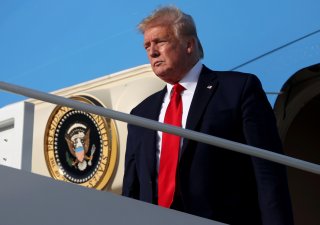 The longest war in American history—Afghanistan—has recently broken through the nonstop news coverage of the COVID-19 pandemic. President Donald Trump brushed back The Wall Street Journal’s editorial board for its suggestion that withdrawing U.S. troops after nearly nineteen years of fighting would be “impulsive.” Then reports circulated that the Pentagon, anticipating the president’s preference, is preparing an option for a full withdrawal before our November elections.

In Afghanistan, President Ashraf Ghani and his political rival Abdullah Abdullah concluded a deal to finally usher in a new government after last year’s disputed presidential elections. It followed much cajoling from the United States, including a threatened cut to American aid.

The Taliban and Afghan government also recently agreed to a three-day ceasefire to facilitate a release of Taliban prisoners. Unfortunately, violence was trending up before this deal, with fighting across the country, including a horrific terrorist attack on a Kabul maternity ward.

What does all this mean for U.S. policy and the president’s aspiration to end America’s longest war?

Put bluntly, we should not get distracted by the ups and downs of the conflict or Afghan politics. Instead, we need to stay focused on what America’s long-run national interests require and define our approach to Afghanistan based on that. And here, President Trump has correctly concluded that a full and speedy withdrawal of our troops is imperative. Our national interest isn’t served by continuing to wage a futile battle but by exiting it.

The only real interest we have in Afghanistan is to ensure that another terrorist attack against us does not emanate from there. Fortunately, a large, overt military force in Afghanistan isn’t necessary to deal with this threat. We can use our intelligence capabilities to alert us to legitimate threats that may arise and engage strike capabilities from outside the country to effectively hit them. Moreover, other countries and non-state actors, including elements of the Taliban, in the region have a shared interest in ensuring Al Qaeda and other terrorist groups don’t use Afghanistan as a staging ground for anti-American attacks.

We should not leave even a small force in Afghanistan—whether the 8,600-strong presence agreed to for the first phase of our withdrawal agreement with the Taliban or a smaller, counter-terrorism-focused force some are advocating. Leaving ground troops there promises more casualties in this nearly twenty-year war without enhancing our security. Plus, it will tempt policymakers to repeat past mistakes by adding more troops and expanding their missions.

Additionally, our interests don’t demand we stay until there is a formal peace deal between the Taliban and Afghanistan government. While an agreement ending decades of conflict would be good for the Afghan people, the persistence of conflict in this faraway country doesn’t imply a threat to Americans any more than numerous other lingering foreign civil wars do. We’ve done what we could reasonably do to get the talks to this point. Now the outcome of these talks needs to be determined by Afghans, and any failure on their part doesn’t change our interest in coming home.

President Trump appears to have reached the same conclusions and seems determined to withdraw all American forces from Afghanistan.

“The American public overwhelmingly agrees with him—with nearly 70 percent of Americans (and roughly three-quarters of veterans) saying they would support him if he were to follow through with a full withdrawal.”

However, the clear-cut case for withdrawing isn’t stopping many within the foreign policy establishment from trying to prevent an end to American involvement in the war. David Petraeus, for example, has argued that “under no circumstances should the Trump administration … agree to a total withdrawal of combat forces from Afghanistan.” Richard Haass, the president of the Council on Foreign Relations; Jack Keane, a former general who is viewed as close to the president; and Susan Rice, President Barack Obama’s former national security advisor, have made similar arguments as well.

Unfortunately, these establishment elites have failed to tell us how staying is going to accomplish much more than wasting additional American blood and treasure. We shouldn’t ask our troops and taxpayers to continue paying dear costs for a mission based on a flawed understanding of what is required for our interests, the extent to which we can shape a better Afghan government, and how we could actually stem what Haass last year called “a slowly deteriorating stalemate.”

President Trump should ignore these voices who have consistently been wrong about Afghanistan. Instead, he should trust his own instincts and accelerate the withdrawal from the country. The increased burdens placed on our country by the COVID-19 pandemic make it imperative that the United States begin to better prioritize its national security resources—and withdrawing from Afghanistan would be a good first step. It would not only be good policy to completely withdraw militarily from Afghanistan by our elections—but based on public polling, it would be good politics, too. It wouldn’t hurt the president to also signal we’ll begin carefully weaning the corrupt Afghan government from our billions in aid.

The United States has accomplished what it needed to in Afghanistan. We should withdraw and wean. After over 2,200 American servicemembers’ lives lost and a trillion U.S. tax dollars spent in the country, it is time for the Afghans to take responsibility for the future of Afghanistan.

Dr. William Ruger is vice president of policy and research at the Charles Koch Institute. He is also a veteran of the Afghanistan War.