President Trump at the UN: An Unapologetic Defense of 'Principled Realism' 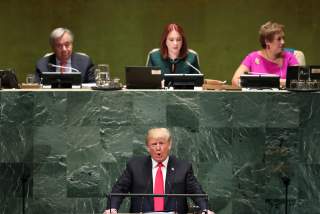 Addressing the United Nations for the second time in his presidency, Donald Trump spoke first to the American people, using the opportunity to tout his domestic policies and successes. “The United States is stronger, safer and a richer country than it was when I assumed office less than two years ago,” he proclaimed.

However, the bulk of the speech outlined and defended his foreign policy and international priorities—exactly what you’d expect in a speech before the world’s leaders.

North Korea was featured prominently, as it was in last year’s speech. However, the tone could not have been more different. In 2017, the Trump warned, “Rocket Man is on a suicide mission for himself and for his regime.” This year, he expressed optimism in ongoing negotiations with North Korea. While noting that progress has been made, the president smartly cautioned that much remains to be done and vowed that “sanctions will stay in place until denuclearization occurs.”

Trump also highlighted the diplomatic effort in the Middle East to address the situation in Syria, combat ISIS, and deal with other points of instability. He reaffirmed America’s determination to “respond if chemical weapons are deployed by the Assad regime,” assist the refugees displaced by the war, and participate in UN peace negotiations.

He reserved his strongest warning for Iran:

Iran’s leaders sow chaos, death and destruction. They do not respect their neighbors or borders, or the sovereign rights of nations. Instead, Iran’s leaders plunder the nation’s resources to enrich themselves and to spread mayhem across the Middle East and far beyond . . . The Iran deal was a windfall for Iran’s leaders. In the years since the deal was reached, Iran’s military budget grew nearly 40 percent. The dictatorship used the funds to build nuclear-capable missiles, increase internal repression, finance terrorism, and fund havoc and slaughter in Syria and Yemen . . . We cannot allow the world’s leading sponsor of terrorism to possess the planet’s most dangerous weapons. We cannot allow a regime that chants “Death to America,” and that threatens Israel with annihilation, to possess the means to deliver a nuclear warhead to any city on Earth. Just can’t do it.

He made clear that the United States will continue to ratchet up pressure on Iran through sanctions and urged other nations to “support Iran’s people as they struggle to reclaim their religious and righteous destiny.” Iran is a serious threat, and the administration is right to confront it.

The most consistent theme of the speech was a robust defense of American sovereignty and security.

Early on, the president stated, “America will always choose independence and cooperation over global governance, control, and domination. I honor the right of every nation in this room to pursue its own customs, beliefs, and traditions.” He concluded the speech by noting, “Sovereign and independent nations are the only vehicle where freedom has ever survived, democracy has ever endured, or peace has ever prospered. And so we must protect our sovereignty and our cherished independence above all.”

These bookends encapsulate the U.S. belief that sovereignty derives from the governed and that efforts to impose rules, restrictions, or principles via supranational institutions upon the American people without our consent are objectionable and unjust. This notion threads through the speech in several passages including:

- The direct rejection of the International Criminal Court that claims authority to investigate and prosecute Americans even though the United States has never joined the court.

- The right of nations to control their borders and “confront threats to sovereignty from uncontrolled migration.”

However, the speech at times flirted unhelpfully with the idea that the United States would not criticize other nations or seek to advance core principles that America has embraced for decades. For instance, the president stated, “The United States will not tell you how to live or work or worship. We only ask that you honor our sovereignty in return.”

If the United States does believe that sovereignty is derived from the governed, then it must be a champion of civil and political rights around the world as well as self-government. Americans should not tell others how to worship, but they must instead defend their freedom to worship as their conscience dictates. This does not mean that the United States has an obligation to intervene or take direct action when people are denied these rights, but the United States should not and must not stand silent.

In fact, the failure of the Human Rights Council to champion human rights consistently and forthrightly was a central reason for the U.S. decision to withdraw from the Council this summer. This was the correct decision, and the president rightly praised Ambassador Nikki Haley’s leadership in leaving that gravely flawed body. However, the United States undermines its case if it is silent in the face of repression.

Indeed, the president’s condemnation of the “human tragedy” in Venezuela in his speech is a case in point. The president is right—socialism and communism have “produced suffering, corruption, and decay” wherever it has been tried. We do people no favors by refraining from urging them to avoid that misery or failing to condemn repressive governments that deny their people fundamental rights and freedoms.

The president also defended his recent trade actions based on sovereignty. There is no doubt that nations have the right to defend their economic interests and respond when other nations violate agreed rules, such as Chinese theft of intellectual property. But the economic benefits of trade between nations are well established and the long-term interests of the American people should lead the administration to support free trade, not protectionism.

Finally, the president focused on the need to advance U.S. interests in the UN, including asking the UN to be “more effective and accountable” and more evenly share the burden of supporting its activities. This is certainly a reasonable expectation for the largest financial supporter of the UN and is a goal pursued by U.S. administrations going back decades.

He also stated that “[m]oving forward, we will only give foreign aid to those who respect us and our friends.” This is a broad statement and not entirely clear. America provides assistance for many purposes, and it is not useful to tie allocation of all aid to support for the United States at the UN. Linking humanitarian and security aid to support of U.S. policy priorities would undermine the purposes and effectiveness of that aid. However, the United States also provides assistance to advance its broader foreign-policy interests. The UN is an important institution where governments make significant decisions, and it is entirely appropriate to use this assistance to increase support for U.S. priorities in the UN.

Overall, the speech was quintessential Trump. It was an unapologetic defense of his “principled realism” approach to foreign policy—one that elevates the interests of the United States and protection of the American people above all and explicitly rejects the more idealized global leadership role favored by the foreign-policy establishment—with significant divergence in means and goals—on the left and the right. This approach wins few plaudits in Turtle Bay and Washington, but appeals strongly to those who most concern Trump: non-coastal Americans who have grown increasingly concerned that their circumstances and welfare are irrelevant to the decisionmakers in Washington.