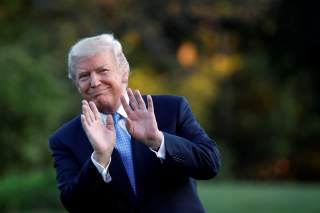 In case we weren’t sure, the White House has hosed down the idea that the United States is ready to conduct talks with North Korea. Beyond humanitarian discussions about the release of detained Americans, White House Press Secretary Sarah Huckabee Sanders insisted that “there will be no conversations with North Korea at this time.”

But the Trump administration has been doing plenty of talking with North Korea. The least regular of these may be the direct talks, which Rex Tillerson pointed to just a few days ago, only to be told by his boss that it was a waste of his time. Perhaps the Secretary of State was referring to the 1.5 track dialogue (a mix of officials and think-tankers) that got some additional media coverage a couple of weeks ago. Perhaps there is more: adversaries sometimes have back channels that neither wish to acknowledge. But whatever it is, there is at least some diplomatic—or quasi-diplomatic—talk going on.

More obvious is the talking that Donald Trump has been doing with Kim Jong-un. The president doesn’t have to leave the confines of the West Wing or his Bedminster Golf Club to do so. Each time Trump tweets condescendingly about “Little Rocket Man,” he is talking to his North Korean counterpart. Even the president’s dismissal of the idea of negotiating with Kim is a form of talk. Trump’s threats to annihilate North Korea belong in the same category. And he’s explicitly acknowledged that he’s in a conversation with the North Korean leader, although Trump wants us to know who initiated it. “He’s saying things that should never, ever be said,” the president claimed. “And we’re replying to those things. It’s not an original statement. It’s a reply.”

The Pentagon is also talking with North Korea. I don’t mean to suggest that there is military-to-military dialogue going on that we don’t know about. Instead, each time U.S. nuclear-capable bombers fly near North Korean airspace, each time the United States and South Korea conduct exercises, and each deployment of missile-defense batteries in South Korea, the Pentagon is talking to Pyongyang. This tacit communication is what the late Thomas Schelling called the “diplomacy of violence.” Especially in situations where the actual use of violent force is considered too costly, this style of coercive diplomacy comes into its own.

Of course, Kim Jong-un knows the diplomacy of violence very well. Each North Korean nuclear or thermonuclear test, each flight of a missile, each warning that some part of the United States will be targeted, is an exercise in signal sending. As Trump and Kim exchange threats, and as the armed forces of the two countries engage in military signaling, plenty of informal talking is going on. And with the international media watching every step, those messages are amplified. North Korea and the United States do not need loud-hailers to make their talk more audible. What Trump likes to call “Fake News” often does the job for them.

We know what the White House means when it says that talks are not on the agenda. This especially means bilateral negotiations: Washington does not want to give North Korea the mantle of legitimacy these would offer. Presumably this reluctance also extends to the six-party talks, which Beijing last hosted nearly a decade ago.

But that type of formal bargaining—where North Korea gets something in exchange for slowing down its missile and nuclear programs—is not the only kind. All manner of implicit bargaining is happening through various forms of talk. Silence across all channels is simply not an option, especially with this president. So the next time you hear that the United States isn’t talking to North Korea, think again.

Robert Ayson is a professor of strategic studies at Victoria University of Wellington, New Zealand.