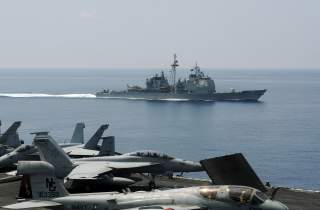 President Trump wants China’s help to rein in North Korea and has been open to negotiating with Beijing to deal with Pyongyang. Negotiations began with obtaining a more beneficial trade deal with the United States. There are now reports that the Pentagon turned down a freedom-of-navigation operation request in the South China Sea to avoid “antagonizing China.” No indication has been made as to whether Washington, DC is trading the South China Sea for Beijing’s cooperation on Pyongyang, but it is certainly one of many policy options.

While China’s help will be critical in a denuclearized Korean Peninsula, would it be wise for the United States to give up a large bargaining chip, such as the South China Sea, in exchange for Chinese action on North Korea—especially when China will not act in a way that could destabilize Kim Jong-un’s regime? Other issues exist in the U.S.-China relationship, such as the difficulty of doing business in China, cybersecurity, and not to mention the potential Thucydides Trap. Furthermore, Washington would lose credibility in the eyes of its allies and potentially place its economic interests at risk. So, regarding a trade of the South China Sea and avoidance of a trade war for North Korea, Beijing looks like it would get a lot more in exchange for very little. These gains are worth considering:

Beijing and the Chinese Communist Party (CCP) have numerous interests in the South China Sea. Nearly all of them are linked to its primary interests: government legitimacy.

Beyond the nationalist pillar, another South China Sea legitimacy issue, one that is often overlooked or combined with nationalism, is Chinese territorial integrity. Mao Zedong and the CCP claimed their legitimacy came from defending and upholding China’s territory. In general, territory has been a crucial aspect of government legitimacy in China. The failure of the Qing Dynasty and the Republic of China (ROC) to defend themselves from imperialism played a role in their respective downfalls. Since the CCP does not want to see itself go the way of the Qing or the ROC, it feels the need to prevail in the South China Sea territorial disputes. Failure to do so could spark regime-threatening sentiment.

Thus, controlling the disputed territory in the South China Sea would allow China to tap into vast energy resources, reduce its dependence on foreign oil and gas, and keep the economy growing, thereby helping to maintain the legitimacy of the Communist Party.

China’s economic interests in the South China Sea are not limited to resource extraction and securing energy supply lines. Beijing also has an interest in upholding freedom of navigation for trading vessels. Around 60 percent of all trade passing through the South China Sea is headed to China. That is about $3 trillion worth of commerce benefiting the Chinese economy. Furthermore, China’s second- and third-largest trading partners, Japan and South Korea, rely on South China Sea trade for their own energy security and economic prosperity. Thus, China has a vital interest in protecting the waterways of the South China Sea to not only secure its own trade, but to secure the trade of its trading partners. Failure to do so could lead Chinese economic growth to stall through foreign interdiction of Chinese trade, or the disruption in trade of its trade partners, thereby threatening the legitimacy of the CCP.

Given China’s various and, to a degree, critical interests in the South China Sea, should Washington give the region away, along with a more favorable trade deal, in exchange for Beijing pushing North Korea to denuclearize? All in all, China would gain a great deal if this policy option is pursued. Understanding what China would gain through the South China Sea, however, allows the United States to see that Beijing will not be so flexible in the region, due to it forming a core party of the Communist Party’s legitimacy. For now, the South China Sea card is too valuable to play. Washington would be served better if it were to hold it for another day.