To Prevent China from Grabbing Taiwan, Stop Russia in Ukraine 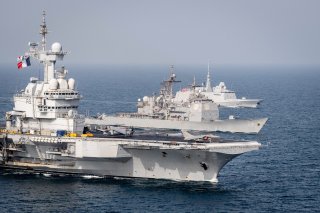 The quickest way to motivate Xi Jinping to invade Taiwan would be to fail to deal decisively with Vladimir Putin’s invasion of Ukraine. If the United States and its allies can inflict enough pain on Putin for his gamble in Ukraine, then Xi is likely to conclude that Taiwan, at least for the foreseeable future, is not worth the risk it would entail.

But thinking in zero-sum terms between Europe and Asia overlooks other fungible and pedagogical aspects of power. This is especially important in the case of Russia and China, which maintain similarly revisionist postures and have a history of watching and learning from each other’s moves. In the current crisis, China is closely watching two things in particular.

First and most importantly, Beijing will watch how Russia fares militarily. Like Russia, China has spent the last several years applying lessons from U.S. military offensives in the Balkans and Iraq in the modernization of its military. Ukraine is the first demonstration of the results of those investments against a serious opponent. By helping the Ukrainians inflict high costs on the invaders, the United States and its allies can demonstrate the dangers that even a very large power faces of protracted conflict on hostile territory. The same can happen in Taiwan.

Second, Beijing is watching how Russia fares economically. Like Russia, China has been warned that it will face crippling sanctions should it attempt to invade Taiwan. To a far greater extent than Russia’s commodity-driven economy, China is intertwined with the global economy and vulnerable to disruptions in financial and trade flows. If the United States and its allies cannot achieve a decisive effect through sanctions against a second-rate economic power like Russia, China may well conclude, they will be even less effective against China.

In this sense, President Joe Biden was right when he said, before the invasion, “great powers don’t bluff.” If the United States is going to threaten catastrophic sanctions against Russia over Ukraine, they better damn well be catastrophic, because the credibility of the U.S.-led financial system for punishing large-scale aggression is on the line. The United States will only get one chance to demonstrate that credibility—and Ukraine is it.

The good news in all of this is that Ukraine has given the United States and its allies a momentary, and perishable, window to act decisively and not only deal with the situation in Ukraine but dissuade a move against Taiwan that would likely become a global conflagration. The impact of Putin’s brutality in galvanizing European burden-sharing is a game-changer for U.S. global strategy. With Germany spending more in coming years on defense than Russia ($110 billion annually vs. $62 billion), the United States will be able to focus more of its available conventional forces on deterring China.

Ukraine is also putting a serious dent in Russia’s near-term capacity for waging war. Irrespective of how the war goes from here, the Russian army will have depleted a large number of its high-grade munitions, which are not easily replaced. The Russian economy, too, will be set back for years to come due to depleted capital and lost investment. Russia will still be a serious threat, of course, but it will need a period of recuperation at exactly the moment when Europe is becoming more capable.

All of which is to say: the current moment matters disproportionately from the perspective of U.S. strategy. The moment of greatest danger for Taiwan is between now and when Europe’s defensive efforts begin to bear fruit—a period of several years, but not forever.

Viewing the current situation as a strategic window in which the European and Asian situations are connected should inform how we think about U.S. policy. It suggests that it’s right for the United States and its allies to bring as much pressure as early as possible in the conflict—the opposite of the Biden administration’s stairstep approach. We were able to go light on the first two rounds of sanctions only because the Russian military ended up performing poorly in the opening days of the conflict. China could reasonably conclude that in a similar span of time it could consolidate its position over Taiwan while the United States and its allies tarried to assess Taiwanese will to resist. If the United States is now going to sanction the Russian energy sector, it would be far preferable to do so in conjunction with the Europeans, not least to demonstrate to the Chinese that the U.S. and its allies are willing to jointly accept the pain of recession to stop large-scale aggression. And increasing U.S. energy production is now crucial, not just to buttress its own ability to weather shocks but because it will demonstrate to the Chinese that, when the chips are down, the United States has the ability as a society to subdue environmentalist impulses for the sake of national security.

Militarily, the same logic applies, up to a point. A sequencing strategy would bring as much indirect military pressure to bear as possible on Putin, now that he has overplayed his hand. The most effective form of that pressure is in Ukraine, via U.S. weapons and intelligence to wear down Russian fighting capabilities. There are also plenty of weapons that the United States can permanently station in frontline NATO without degrading U.S. military power in Asia. Most U.S. armor and mechanized equipment, for example, won’t be needed in Asia but would have a huge, positive effect if placed in Poland and Romania.

But it is precisely because the present window is strategically precious that U.S. policymakers should not take actions, like creating a no-fly zone, that would lead to a direct confrontation with Russia. Such a confrontation could very well change the Chinese calculation in favor of moving against Taiwan now, on the logic that a U.S. war in Europe would engross U.S. attention and resources far more than a proxy war in Ukraine.

For a similar reason, the United States should not wish to see secondary sanctions applied to China—for example, for helping Russia evade Western pressure. The whole point should be to keep U.S. power applied as surgically as possible to the weaker of the two rivals, with a view to decisively draining it and being able at a later date to face China with greater strength as a result.

In short, the United States should act decisively now, but in ways that are not just dealing with “the now.” The United States will have one big chance to create a demonstration effect in Europe that will help avoid a war in Asia. By dealing with the wolf closest to the sled, it will be in a better position later to deal with the larger wolf watching from the hilltop.

A. Wess Mitchell is a former U.S. Assistant Secretary of State for Europe and Eurasia and a principal at The Marathon Initiative.