Preventing the next Big War in the Middle East 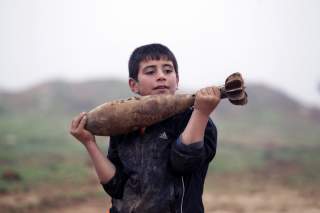 Once a formidable regional player, Syria has become a regional playing field and a combustible bargaining ground for regional and international heavyweights with stakes in the country’s future. Israeli defense minister Avigdor Lieberman, for instance, stressed on April 11 that his country simply “has no other choice” but to prevent Iran from entrenching militarily in Syria, adding that Israel is determined to stop its regional archenemy “whatever the cost.” For its part, Iran has invested blood and treasure in saving its Syrian ally and establishing a strategic foothold in it. To uproot Iran from the country appears unrealistic at this stage. Israel and Iran are thus entering the most decisive phase of this bargaining process. Against this volatile backdrop, efforts must be made to prevent conflagration on the Syrian battlefield—which may indeed be inevitable—from igniting an all-out war between Israel and Hezbollah in the Lebanese arena. Never has this been more urgent.

The 2006 Lebanon war, which lasted thirty-four days, was one that neither Israel nor Hezbollah desired or saw coming, and both regretted. The premise that another war is inevitable has been taken for granted in Israel since the cease-fire took effect. Speculation has persisted throughout the years. As Hezbollah Secretary General Hasan Nasrallah himself pointed out last year: “There was an assessment that a third Lebanon war would take place in 2007, but some said 2008. When 2008 passed, they said 2009. But 2009 passed, so they said 2010. When that year passed, they said 2011. The same thing happened in 2016. Eleven years have passed since the July War, and in every single year since then we heard about a third Lebanon war. . . . who knows, 2017 could turn into 2018, which will then lead to 2019, 2020—God only knows.”

As predicted, 2017 indeed gave way to 2018, with stability intact. Will Israel and Hezbollah make it to 2019 without a third Lebanon war? In recent months Israel has characterized the establishment of an Iranian-run missile manufacturing plants on Lebanese soil as a red line that if crossed would be met with a firm military response. On March 30, IDF Chief of Staff Gadi Eizenkott repeated this warning, emphasizing that while Hezbollah’s acquisition of just “a few” long-range missiles was “one thing,” large numbers of precision-guided missiles, capable of inflicting “strategic damage” to Israel, was “another thing.” Still, Eizenkott reassured Israelis that such a threat was unlikely “in the years 2018–2019.” In another statement, Eizenkott said that the chances of war have increased relative to the past three years, but added that “we need to exert efforts to prolong the eleven years that have passed since the second Lebanon war into thirty more years of quiet.”

Israel and Hezbollah have undoubtedly used the past twelve years of deterrence stability to better prepare their military forces for the next war. To maintain deterrence, each party has exerted considerable efforts in a deliberate attempt to convince the opponent of the exorbitant costs it would pay in another war and of the inescapable defeat it would suffer. Indeed, both parties have come to conceptualize their conflict as one that is currently governed by mutual deterrence.

Yet deterrence, at least in its conventional version, typically lasts until it does not, meaning that it is ultimately a time-buying strategy requiring constant maintenance and occasional risk-taking. But how have the parties harnessed this period of stability to restructure their strategic situation altogether? For the most part they have used this quiet to better prepare for the next war (and in Hezbollah’s case, to shore up its Syrian ally). Although this dynamic has helped to create and maintain deterrence, it also guarantees that the 2006 Lebanon war will pale in comparison to a potential future war.

For decades Lebanon remained under Syria’s threatening shadow, with its foreign policy dictated from the presidential palace in Damascus. Syria is no longer a factor in that sense. In addition, a domestic political equilibrium or sorts has emerged in Lebanon. President Michel Aoun, a long-time Hezbollah ally and former anti-Syria military general who does not harbor inherent hostility toward Israel, may be in a position to reconcile between Hezbollah’s agenda and that of Prime Minister Saad al-Hariri, who is committed his late father’s legacy of making Lebanon a beacon of development and economic prosperity. To achieve this Hariri has sought to shield and dissociate Lebanon from the regional upheaval and the Arab-Israeli conflict, and achieve a “permanent ceasefire” with Israel. He played a key role in two major international conferences, held in Rome and Paris, which garnered billions of dollars in loans and grants to support Lebanon’s economy and army. Speaking at the Paris conference, Lebanese foreign minister Gebran Bassil said “the danger of a military conflict between Israel and Hezbollah has decreased.” This is precisely what the donor countries are banking on.

Lebanon’s political sights are currently on the upcoming parliamentary elections, the first in nearly a decade, slated for on May 6. But a potentially more important development is expected in the wake of the elections. President Aoun recently announced that a Lebanese national dialogue will reconvene after twelve years to discuss the country’s national defensive strategy. This means that Hezbollah’s military role will be on the table as the various parties debate who in Lebanon gets to decide on war and peace. The last time a similar dialogue took place was in early 2006, under quite different circumstances. Held in the wake of United Nations Security Council Resolution 1559, which called for the “disbanding and disarmament of all Lebanese militias,” and the subsequent termination of Syria’s three-decade military presence in Lebanon in 2005, Hezbollah was clearly on the defensive. At the time, Hezbollah’s rivals sought to force the organization to integrate its military force into the Lebanese army and bring its approximately fourteen thousand rockets under state control. Back then, the dialogue was thwarted by Hezbollah’s decision to kidnap two IDF soldiers in a cross-border attack that spiraled into war and put to rest any notion that decisions of war and peace lied at the discretion of the elected government.

Two wars later—one with Israel, another one in Syria—Hezbollah is a battle-hardened actor with regional influence, political clout, and a fierce military arsenal of 150,000 rockets and other advanced military hardware. Its bargaining position within the Lebanese political arena is stronger than ever. Having said that, Hezbollah will likely be restrained by the immense toll the war in Syria has imposed on its own Shia constituency. In recent years Hezbollah has lost an astonishing number of two thousand fighters in Syria, not counting several thousand injuries.

Nor can Hezbollah dismiss the other domestic players in the country, several of whom are strongly opposed to further risking Lebanon in the service of Hezbollah and Iran’s “resistance” agenda. Touring the Lebanese-Israeli border last year, Prime Minister Al-Hariri urged the United Nations to help turn the current cease-fire along his country’s border with Israel—the two countries are technically at war—into a permanent, formal cease-fire agreement. He later ordered the Lebanese security services to ban entry or arrest an Iranian-backed Iraqi Shia militia commander who had visited the Lebanese-Israeli border and, flanked by a Hezbollah commander, expressed his militia’s readiness to “stand united with the Lebanese people and the Palestinian cause against the Israeli occupation.” Last Friday Hariri once again visited southern Lebanon, declaring that “gone are the times when the state failed to shoulder its responsibility for protecting” Lebanon’s border with Israel.

Israeli analysts and senior IDF officers have posited in recent years that the next war would result from a “miscalculation,” between Israel and Hezbollah. However, another next war is less likely to result from a tactical glitch than from the strategic undercurrents shaping the international order in the Levant. Hezbollah wields military and political clout like no other group in Lebanon, including the state. Any attempt to subdue the party or reorient Lebanon in a more pro-Western direction will invite a showdown in the domestic front, where Hezbollah is not likely to lose. However, that a formal political agreement between Israel and Lebanon is beyond reach does not preclude other practical measures to shield Lebanon from the worsening friction between Israel and Hezbollah’s patron, Iran, in the Syrian arena, and to create a firebreak between the conflict in Syria and the stable but inflammable Lebanese arena.