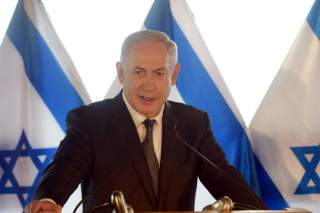 On May 31, Prime Minister Benjamin Netanyahu earned plaudits from the international community and angered his ultra-right-wing government when he announced that he sees the Arab Peace Initiative of 2002 as a basis for renewed peace talks with the Palestinians. On June 11, at a closed meeting with his fellow ministers, he reassured them that “Israel will never accept the Arab Peace Initiative as a basis for negotiations. [Arab countries] must grasp that they need to revise the Arab League proposal according to the changes that Israel demands.”

These contretemps are a perfect example of the manipulations and deceit that have characterized Netanyahu’s “peace diplomacy” during his four terms as prime minister of Israel. He empowered religious nationalists and xenophobic right wingers, and supported their enlargement of settlements throughout the West Bank, both openly and clandestinely, even as he retained the support of the U.S. Congress and a hidebound American Jewish establishment by claiming that his commitment to a two-state solution has been frustrated by Palestinian and Arab rejectionism.

So what exactly are the changes in the Arab Peace Initiative that Netanyahu now demands? He would like the world to believe that the initiative requires a complete Israeli withdrawal of its occupation from East Jerusalem and the entire West Bank and the removal of all of its settlements east of the pre-1967 Armistice Line. Netanyahu has long maintained that this demand contradicts President George W. Bush’s undertaking to Prime Minister Ariel Sharon (April 14, 2004) that the U.S. would support Israel’s retention of certain settlement blocs beyond the 1967 line.

In fact, there is not a scintilla of truth to any of these claims. I know, because I was personally involved over a period of several years in discussions with the author of what became the Arab Peace Initiative, Crown Prince (and later King) Abdullah of Saudi Arabia, and with the Department of State.

During the discussions that began in Riyadh at least two years before he went public with his initiative in 2002 in a conversation with Thomas Friedman of the New York Times, Crown Prince Abdullah told me and a delegation of the U.S./Middle East Project that the Israeli-Palestinian conflict was a political dispute. As such, Saudi Arabia and other Arab countries are prepared to recognize and to establish normal diplomatic ties with Israel once it reaches a two-state peace accord with the Palestinians. However, if the conflict remained unresolved it would degenerate into a religious dispute that would permanently defy resolution.

I told him that if he were to say this publicly, it could dramatically alter the course of the Israel-Palestine conflict. He said he was not yet ready to do so, but would not object to my reporting what he said. I declined, saying that if it did not come from him directly, it would lose its impact.

On February 17, 2002, Thomas Friedman reported the Crown Prince’s initiative, declaring the readiness of Saudi Arabia and other Arab countries to establish full diplomatic ties with Israel upon Israel’s conclusion of a peace agreement with the Palestinians that establishes a Palestinian state along the pre-1967 border with its capital in East Jerusalem. However, missing from Friedman’s report was the following. In my discussions with the Crown Prince, he agreed that the Saudi initiative would allow equal territorial swaps on both sides of the 1967 line to enable Israel to incorporate several settlement blocs. It also allowed Israel’s annexation of Jewish neighborhoods in East Jerusalem and sovereignty over the Western Wall.

I called the Saudi authorities, who informed me that Crown Prince Abdullah authorized me to make that clarification and that he would confirm it.

Four days later (February 21), the New York Times published my Op-Ed containing this clarification. The New York Times noted that “American and Saudi officials said that Mr. Siegman’s account accurately reflected the Crown Prince's views.” In its own editorial, the Times wrote that “the Crown Prince’s thinking as set forth ... in an interview with our colleague Thomas Friedman and amplified in an Op-Ed article today by Henry Siegman, a veteran Mideast analyst, deserves serious consideration by Israel, the Palestinians and the United States.” The editorial noted that none of the discussions about an Israeli-Palestinian accord “are more serious in their implications than the suggestion by Crown Prince Abdullah of Saudi Arabia that his country is finally ready to lead the Arab world to normal relations with Israel in the event of a fairly negotiated peace agreement with the Palestinians.”

Netanyahu is obviously fully informed of this history of the Arab Peace Initiative. And he is certainly aware of President George W. Bush’s admonition to Israel’s government that while he had said he would support Israel’s demand for the retention of certain settlement blocs that adjoin the 1967 Armistice Line, these cannot be unilaterally confiscated by Israel, but must receive Palestinian approval in the course of negotiations in which Palestinian demands would also be on the table. At a press conference at the White House in 2005, President Bush stated clearly that “Israel should not undertake any activity that contravenes road map obligations or prejudice final status negotiations with regard to Gaza, the West Bank and Jerusalem…Any final status agreement must be reached between the two parties, and changes in the 1949 Armistice Lines must be mutually agreed to.”

The United States position on this is very clear and remains the same. No one should try and unilaterally predetermine the outcome of a final status agreement. That's to be done at final status. The President did say that at the time of final status, it will be necessary to take into account new realities on the ground that have changed since 1967, but under no circumstances should those realities be—should anyone try and do that in a preemptive or predetermined way, because these are issues for negotiation at final status.

But that is exactly what Netanyahu and his government continued to do. Fifty years into Israel’s occupation of the West Bank, Israel’s government is continuing its “preemptive and predetermined” territorial changes and a policy of clandestine ethnic cleansing in what the Oslo Accords designated as Area C, which constitutes over 60 percent of the West Bank.

As for the United States, it continues to pretend it believes Netanyahu’s claim that he is seeking a two-state solution, and continues to assure Israel that it will not allow “any daylight”—and any Security Council resolutions—to come between the U.S. and Israel.

If in fact it no longer believes Netanyahu’s lies, then its tendency of “balancing” even the mildest reproaches of Israel’s never-ending occupation with condemnations of Palestinian incitement is particularly reprehensible. Whatever incitement the Palestinian Authority may be guilty of, it pales into insignificance when compared to the incitement that is Israel’s half-century long occupation.

As noted recently by Ben Ehrenreich in Politico in an article headlined "How Israel is Inciting Palestinian Violence," Israel’s occupation

functions as a massive mechanism for the creation of uncertainty, dispossession and systematic humiliation. It is not just soldiers and guns, but a far-reaching structure that affects all aspects of Palestinian life—a complex web of check points, travel restrictions, permits, walls and fences, courts and prisons, endless constraints on economic possibilities, home demolitions, land appropriations, expropriations of natural resources, and, too often lethal force.

Neither the U.S. nor the Quartet’s diplomacy has the slightest prospect of changing the status quo that Netanyahu has so successfully entrenched if they cannot screw up the courage to state straightforwardly the truth—that Israel’s half-century long occupation not only incites to violence but itself constitutes violence incarnate on a massive scale.

The injection of such truthfulness might perhaps help flush the diplomatic channels that have for so long been clogged by pretense and dishonesty.

Henry Siegman is the President of the U.S./Middle East Project. He is a former senior fellow on the Middle East at the Council on Foreign Relations and a former head of the American Jewish Congress and of the Synagogue Council of America.