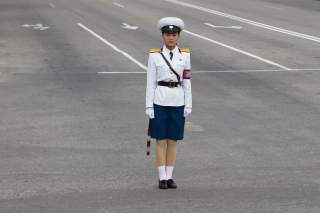 North Korea is suffering from another natural disaster, which seems to have been an almost annual event in the country’s sixty-eight-year history. Floods have devastated parts of the North, displacing some seventy thousand residents. The United Nations says 140,000 people need help and is seeking nearly $30 million to aid Pyongyang.

Alas, such tragedy is nothing new for the Democratic People’s Republic of Korea. Last year, the United Nations began worrying about a “huge food deficit” and the DPRK claimed “the worst drought in 100 years.” The latter might have been true, but Pyongyang oft has exaggerated its needs to win more foreign aid.

Still, North Koreans have paid a high price for their government’s sins: between 1995 and 1997, several hundred thousand people—and conceivably as many as two million—died from famine. Alas, their government was more responsible than nature for that horror.

Almost every “natural” crisis in North Korea is exacerbated by the ruling regime’s totalitarian economic and political policies. As Chinese and Russian revolutionaries also discovered, collectivism makes overall prosperity nearly impossible and sharply restricts food output. At least the Kim regime’s increasing acceptance of limited markets in both agricultural production and distribution makes a disaster like that two decades ago less likely.

Equally harmful is the huge diversion of scarce resources into Pyongyang’s oversize military and active missile and nuclear programs. Additional resources go to enrich the Kims and their loyal retainers and courtiers. The DPRK could afford to purchase more food for its people if they were the regime’s first priority.

Nevertheless, past Western transfers undoubtedly helped some needy people, especially after donors imposed tougher accountability. Moreover, NGO staff had at least some contact with the local population. For instance, American Dorothy Stuehmke believed that her presence gave residents of the North “a window on the outside world and perhaps a different perspective of the U.S.”

As similar, if not quite so severe, problems recur in the North, South Koreans today are debating aid for the DPRK. Yes or no?

For a decade, Seoul implemented the “Sunshine Policy,” which essentially attempted to purchase Pyongyang’s friendship. To be sure, the ROK hoped to improve North Koreans’ lives. But South Korea also desired to moderate the Kim dynasty’s hostility. Between 1995 and 2005 the South gave North Korea nearly $1.2 billion in food and fertilizer alone. Aid peaked at $400 million in 2007.

President Lee Myung-bak finally cut off most support after North Korea sank a submarine and bombarded an island in 2010. Seoul decided that denuclearization should precede further assistance to the DPRK.

The United States provided a similar amount of aid between 1995 and 2005 in food, medicine and energy. Some was for purely humanitarian purposes, while much was mandated by the Agreed Framework to reward the North for freezing its nuclear program. Like the South, Washington also ended the transfers out of frustration in dealing with the DPRK. In early 2012, the Obama administration offered food assistance to induce North Korea to rejoin nuclear negotiations, but the pact collapsed after the North proceeded with a rocket launch, which Washington viewed as a violation of the agreement’s spirit.

Unsurprisingly, South Koreans are skeptical of new aid proposals. Polls show that a majority of the ROK population opposes flood assistance. People believe Seoul should tighten sanctions against the North rather than ease the economic burden on the Kim Jong-un regime. The ruling Saenuri Party indicated that it would support aid only if the DPRK “ends the nuclear and missile provocations,” which is highly unlikely. Many on the left, including the opposition, back assistance. Despite Pyongyang’s misbehavior, declared the newspaper Hankyoreh, “it is unjust to neglect the North Koreans’ suffering.”

Although refusing to help seems harsh, the Kim dynasty’s behavior leaves little choice. The Republic of Korea “is worried that the North may use the aid from the South to develop its nuclear and missile programs further,” explained Choi Young-il of Kyunghee University.

In the past Pyongyang diverted aid to favored factions and sold donated food on the domestic black market as well as in China. Even with better accountability, assistance would strengthen the regime. Relieving the DPRK of responsibility for feeding its people and would leave more resources available for military purposes. As J. Peter Pham has argued, “there is no possibility of aid being neutral, much less apolitical. By propping up the pillars of the same government that caused the humanitarian crises in the first place, any aid becomes, however unintentionally, a political choice to reinforce, at least partially, the existing system of oppression.”

Of course, such assistance is unlikely to make or break the Kim regime, especially given substantial Chinese backing for Pyongyang. Both the PRC and North Korea appear prepared to do whatever is necessary to preserve the DPRK. In that case, why provide another opportunity for North Korea to manipulate gullible but well-intentioned neighbors? And if Beijing seems determined to keep the North afloat, it would be best to let the Chinese pay the entire bill for the Kim dynasty’s survival.

However, government-to-government aid is not the only option. The South Korean NGO Council, made up of fifty-nine private groups, has announced plans to step in. ROK officials criticized the Council, but organizations emphasized their humanitarian concern. For instance, the Korean Council for Reconciliation and Cooperation intends to send children’s clothes, which, the group argued, could not be diverted to other uses by the North.

Even private assistance can help sustain the regime in Pyongyang, but such aid does not help legitimize Kim’s rule. Moreover, some organizations, such as the Eugene Bell Foundation, which operates in both the United States and South Korea, have managed to benefit ill North Koreans rather than influential apparatchiks. Eugene Bell avoids politics while rigorously overseeing tuberculosis treatment programs in North Korea.

Refusing official government assistance does not require attempting to isolate the DPRK. The North’s system showing no signs of disintegration, despite high-level defections and executions, and may survive for years more. With the regime obviously committed to developing intercontinental missiles and nuclear weapons, the United States can ill afford to continue ignoring Pyongyang. Aid or no aid, some form of communication seems essential.

But governments should refuse to step in to treat the North’s self-inflicted wounds, including its many “natural” disasters. Responsibility should be placed squarely on the Kim regime and its Chinese patron. Failing to act when innocent North Koreans suffer seems harsh, but foolishly intervening would be worse, helping to sustain this most malignant system.