The Problem with the National Defense Strategy Commission 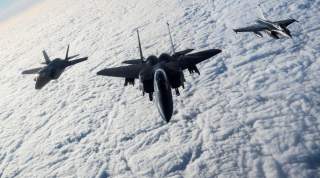 Here we go again. For the third time in the last decade, Congress has established a bipartisan group of outside experts to analyze whether the proposed defense budget program is large enough to implement the current defense strategy. Not surprisingly, the outside group, known as the National Defense Strategy Commission (NDSC), like its 2010 and 2014 predecessors argues that significantly more money is needed by the Pentagon or else there will be dire consequences for the nation. According to the NDSC, the Trump administration plan to spend about $3.7 trillion on the Pentagon from fiscal year 2020 to fiscal year 2024, or about $750 billion per year, is not adequate to support its National Defense Strategy. The commission argues that the Pentagon must spend a minimum of $4.2 trillion over this time, or about $100 billion more a year, than the Trump plan if it is to adequately protect this nation.

There are at least six reasons for why this happened in the past and is happening again now.

First, no group should ever be criticized for saying that the country needs to have a more robust national defense. If an outside group contends that we are spending the right amount or even too much and an unexpected event occurs—like 9/11 or the invasion of Korea—the group can be criticized. However, if the group says we should spend more than the administration has proposed, then no one will criticize it if an unexpected event occurs or even if it does not. According to the NDSC, the security and well-being of the United States are currently at greater risk than at any time in decades because changes at home and abroad are threatening vital U.S. interests and can only be adequately dealt with if we spend $100 billion more a year on defense. In the 2014 analysis, the committee argued that, without budgetary relief, the armed forces would be at high risk of not being able to accomplish the national-security strategy because the United States was facing the most complex and volatile security environment since World War II.

Second, these groups ignore the fact that no matter how much this nation or any nation spends on defense, it cannot buy perfect security. Therefore, deciding how much of the discretionary budget should be allocated to Department of Defense always involves choices and risks. This is true not only for the United States but for other nations. The commission ignores the fact that the United States currently spends more on defense than the next seven nations in the world combined (five of whom are our allies or partners), four times as much as China and ten times more than Russia, the nations the defense strategy identifies as our strategic partners. If we are not spending enough, could not the same be said about our two strategic competitors? Moreover, unlike China and Russia, the United States has allies in the Pacific and Europe who also spend substantial funds on defense. Two U.S.-NATO allies, Germany and France, collectively spend more on defense than Russia.

Third, these commissions only focus on the Pentagon’s expenditures. They do not assess the trade-offs between spending a dollar on a combat aircraft or foreign aid, which also contributes to national security. Nor are they concerned about the rising national debt, which presidents going back to President Dwight D. Eisenhower and military leaders like retired U.S. Navy Adm. Mike Mullen have called the greatest threat to U.S. national security. Even Trump’s current national security advisor, John Bolton, supports cutting the Pentagon budget because of the skyrocketing deficit.

Fourth, the commission mistakenly lays blame for the current state of the military balance on the lack of resources allocated to defense over the last several years due to the Budget Control Act (BCA), which froze defense spending at FY2012 levels. In fact they call it a train wreck. But the commission ignores the fact that the BCA lasted only a year and that along with giving Department of Defense over $200 billion dollars in relief from the caps over the FY2014–2017 period. Moreover, Congress allowed the Pentagon to use half of the Overseas Contingency Operations (OCO), or war fighting budget, which is not subject to the caps to fund items having nothing to do with the wars in the Middle East and Afghanistan. All told this allowed the Pentagon about $400 billion or $80 billion a year, above the caps on its base budget.

Fifth, the majority of members on the commission are all part of what Eisenhower called the Military Industrial Complex. On the commission there were two retired flag officers and several former defense officials, some of whom work for groups supported by the Pentagon. In fact, the co-chair of the 2018 commission, Eric Edelman, the former undersecretary of defense under George W. Bush, has been a member of the 2010 and 2014 groups.

Sixth, the commission believes that to fix the problem we should be able to take politics out of government. It argues that the Pentagon needs sustained, timely, and real budgetary growth. While this would be great, the reality is that in a political system that has elections every two years and members of Congress concerned about defense programs in their districts, this has not and never will happen. Secretaries of Defense, like Melvin Laird (1969–1973) and Frank Carlucci (1987–1988), were able to keep the country safe during times when the Pentagon budgets were being slashed while the threat from Soviet Communism was growing.

The members of the commission should be commended for spending time on this report. But the report itself should be laid to rest alongside those previous reports complaining about bomber and missile gaps with the former Soviet Union, which also turned out not to be true. In fact, if Congress and the administration needs input from a commission, then it should look at the bipartisan Simpson-Bowles deficit reduction report of 2010, which offered six steps to reduce the federal deficit by $3.8 trillion. Included in its recommendations were significant reductions in the projected growth of defense spending. And they should keep in mind President Harry Truman’s claim that the military would not be satisfied even if it was allowed to spend the entire federal budget.

Dr. Lawrence Korb is a senior fellow at the Center for American Progress. He is also a senior advisor to the Center for Defense Information and an adjunct professor at Georgetown University, and formerly served as assistant secretary of defense (manpower, reserve affairs, installations, and logistics) from 1981 through 1985.