Profiling Muslims Is Bad. So Is Ignoring Radical Islam. 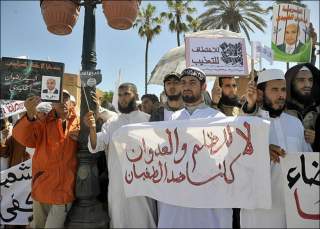 In a thought-provoking article penned in concerned words, one of the finest retired generals in the U.S. Army, Gen. David Petraeus, underscored his anxiety about “inflammatory political discourse that has become far too common both at home and abroad against Muslims and Islam.” He believes that, given the great danger of Islamist extremism, politicians “who toy with anti-Muslim bigotry must consider the effects of their rhetoric.” He asserts that demonizing a religious faith and its adherents is both contrary to fundamental American values and corrosive to U.S. national security interests. He emphasizes that statements of blanket discrimination against Islam directly undermine the United States’ ability to defeat Islamist extremists by alienating and undermining its Muslim allies. General Petraeus lays out his concern and arguments so as to inform the national debate about the stark reality of terrorism and the importance of the choice the country will make in electing the future commander-in-chief.

I fully agree with General Petraeus’s concern and broad arguments. Profiling Muslims, discriminating against Islam or lumping Muslims as radicals or terrorists is indeed abominable, contrary to American values and damaging to the war against Islamist extremism and/or terrorism. This attitude, however, should absolve neither radical Muslims who justify their violence on the basis of certain events in Islamic history or on Islam’s holy scriptures, nor Muslim regimes or rulers who encourage or promote certain variants of radical or fundamentalist Islam for domestic purposes.

It is against this relational dynamics between the rulers and ruled, on one side, and the ideology of radical Islam and the Islamic principle of da‘wa (propagation of the faith) in Muslim society, that I find inconsistency in the way in which General Petraeus, along with the Obama administration and previous ones, seeks cooperation with the United States’ Muslim allies. While the policy of cooperating with Muslim allies to fight the war on radical Islam is necessary and apt, it fails to contextualize this cooperation by neglecting to create a collaborative framework according to which the military and ideological strategies of the war against Islamist radicalism are applied.

In other words, the war on Islamist extremism (as General Petraeus and the Obama administration describe) in cooperation with U.S. allies since the events of 9/11 has had mixed results, becoming almost cyclical. Central to this condition have been the misconception of the ideology of Salafism and the warped nature of U.S. allies’ cooperation. As I explained in painstaking detail in my book Salafism in Lebanon: From Apoliticism to Transnational Jihadism, Salafists aspire to found an Islamic state by returning to the authentic beliefs and practices of the first generations of Muslims (Righteous Salaf); emphasizing a particular understanding of Tawhid (God’s oneness) whereby true belief is demonstrated by both inner faith and manifest action; and ridding Islam of reprehensible innovations made by rationalizing the religion’s holy scriptures (Koran and Sunnah). What Salafists disagree over is how to bring about this Islamic ideal.

Consequently, Salafism as an ideology split into three schools, whereby each one has pursued a certain methodology to bring about an Islamic state. What I call the quietist school focuses on education and espouses an apolitical posture, because its adherents believe the time is not yet suitable to found the Islamic state. What I call the haraki (activist) school seeks political activism to safeguard Muslim community from the foibles of Muslim rulers. And finally, the Salafi-jihadist school seeks to establish the Islamic state through what Salafi-jihadis call jihad in the path of Allah. Al Qaeda, ISIS, Ansar al-Sharia and Jabhat al-Nusra, among many others, are Salafi-jihadist organizations.

Significantly, the United States’ war on Islamist extremism has been, on the one hand, mainly focused on ISIS and Al Qaeda and has not adequately extended to other Salafi-jihadi organizations. This is the case because American allies, though they are at one with the United States in fighting ISIS and Al Qaeda, have supported sister Salafi-jihadi organizations as their own proxy forces. For example, Saudi Arabia and Pakistan support a motley group of Salafi-jihadi organizations to do their bidding in Syria, Kashmir and Afghanistan. On the other hand, the quietist and activist variants of the ideology of Salafism are not sufficiently challenged throughout the Muslim world. In fact, Wahhabism as a quietist Salafi ideology is at the heart of the formal religious establishment in the Saudi kingdom. Similarly, the Deobandi school of Islam, which has been influenced by Wahhabism, is predominant in the Indian subcontinent. Moreover, a plethora of Islamist missionary organizations, affiliated loosely or strongly with Salafism, the Muslim Brotherhood or Deobandism are active in the Muslim world and among Muslim societies in Europe.

It is true, as General Petraeus makes clear, that hundreds of thousands of Muslims are fighting to defeat the terrorists who wish to kill us all. Afghan soldiers are fighting ISIS and the Taliban, the Persian Gulf forces in Yemen are battling both Iranian-backed Houthis and Al Qaeda in the Arabian Peninsula, and Arab and Kurdish forces are battling the Islamic State in Iraq and Syria. Nevertheless, an equal number, if not greater, is fighting or mobilizing against us, at times under the paradoxical pretext of fighting Islamic State or Al Qaeda. More specifically, the Taliban are getting stronger in Afghanistan thanks in no small measure to direct or indirect support by Pakistan’s army and intelligence. The same army that feigned shock on knowing that Osama bin Laden’s hideout was a villa not too far from both the Pakistan Military Academy at Kakul and the Army Burn Hall College. Persian Gulf forces have already reduced a poor and fragmented country into a virtual death trap, where mercenaries and Al Qaeda operatives cross deadly paths with Yemenis. In the meantime, Iran has supported the Shia Zaydis, whose doctrine is closer to Shafi’i Sunni Islam than to Iran’s Twelver Shia Islam, but whose aspiration to historic autonomy in northern Yemen clashed with both the capital’s desire for absolute power and Saudi attempts to convert them to Wahhabism, thereby pushing the Shia Zaydis, led by their Houthi imams, into the arms of Iran. And indeed, Arab and Kurdish forces are battling Islamic State—but their numbers pale in comparison to the indigenous or transnational Salafi-jihadis who crisscross Syria and Iraq.

Put simply, the war against Islamist extremism is not, as General Petraeus describes, a war against a fanatical ideology based on a twisted interpretation of Islam. It is a war against a triumphalist religious ideology that cloaks itself in the sanctity of the sacred and the history of “authentic” Islam as applied by the first four rightly guided caliphs (632–661). Central to its beliefs are the forthcoming fateful battle between Muslim believers and nonbelievers, in which only the “saved” sect of Islam (Salafists) will emerge victorious, and the denunciation of the weakness of the Muslim Ummah (community of believers) as a result of Muslims’ deviation from their faith.

Rarely have authoritarian or totalitarian Muslim rulers challenged this triumphalist ideology, for fear of being further delegitimized as impious Muslims. Surely, the predicament of and problem for the West in its relationship with a large part of the Muslim world is that this triumphalist religious ideology is more or less left unchallenged by Muslim rulers. Is it possible that this triumphalist mindset, which abhors the power and belief system of the West, can peacefully coexist with Western nations? The tragedy is that many Western political leaders have blighted themselves by misconceiving of the very nature of the threat and turning a blind eye to some Muslim allies whose fight against Islamist extremism is a mere façade.

It is against this background and at this critical juncture in American foreign policy that the presumptive presidential candidates’ foreign policies and statements need to be holistically scrutinized in the national debate. The U.S. populace has to decide what commander-in-chief it wants. Someone who has shown a disposition to break with the deleterious foreign policy status quo, bring radicals and terrorists to justice, and take Muslim regimes to task when they directly or indirectly promote radical Islam—or someone who will ominously continue the fight against Islamist extremism, misconceiving of its nature and disregarding the perilous effects of a compromised cooperation with America’s Muslim allies.

Robert G. Rabil is a professor of political science at Florida Atlantic University. He is the author of Embattled Neighbors: Syria, Israel and Lebanon (2003); Syria, the United States and the War on Terror in the Middle East (2006); Religion, National Identity and Confessional Politics in Lebanon: The Challenge of Islamism (2011); Salafism in Lebanon: From Apoliticism to Transnational Jihadism (2014) and the forthcoming The Tragedy of Syrian Refugees: The Case of Lebanon (2016). The opinions expressed in the article do not necessarily reflect those at FAU.

Image: A Salafist demonstration in Morocco. Flickr/Magharebia, CC BY 2.0.