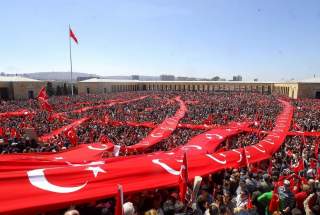 The attempted coup in Turkey raised so many questions that experts and journalists seemed eager to cover other events happening around the world, rather than untangle the situation in Turkey. Still, there is one very clear result of the coup: Western countries should take caution when executing foreign policy based on liberal idealism. The dramatic events in Turkey reminded everybody that there is a limit in international relations for how far even the most powerful countries can go in promoting democracy without damaging their security stance.

The debate between two camps of academicians and policymakers on whether foreign policy should be defined by virtuous ideas or by specific national, primarily security, interests is decades, if not centuries, old. Not long ago, after the end of the Cold War, it seemed that that debate was over—at least on the doctrinal level. The collapse of the Soviet Union was associated with the American foreign policy of democracy promotion and global engagement based on the determination to protect the Western values of market economy, free elections and human rights. Therefore, Western politicians and even scholars declared that not only was this ideology triumphant, but that a foreign policy based on this Western ideology is the only right choice for statesmen to take.

Doubters, trying to make the case for the importance of a foreign policy protecting narrowly defined national interests, were unable to hold their ground on both practical and theoretical grounds. In practice, they were struggling to name threats that a foreign policy based on the Western ideology of free markets and democracy could not eliminate. In theory, one can argue that after Western values withstood the ideological battle of the Cold War, and became even more attractive, sooner or later they must become universal. This process will result in a significant increase in the number of democratic states, and these states cannot have drastically different national interests.

Even putting aside China, with its official communism, one can see that the Middle East contains many security dilemmas created by a foreign policy based on ideology. The failed coup in Turkey serves as the latest example. To better understand the reasons for that, we must remember one basic fact about this kind of foreign policy: a state developing a foreign policy based on any type of ideology demonstrates its conviction that its ideology has global appeal. The country’s leaders and diplomats assume this ideology as universally true, to the point that other countries ought not to have objections against the diplomacy based on it. Furthermore, should there be any places left in the world where this ideology is not accepted, its global promotion will become just and necessary.

One can argue that this has been exactly the thinking behind Western foreign policy for the last twenty-five years. At first sight, liberal ideology’s dominance in international relations should not be problematic for the countries preaching it: ultimately, the ideas of democracy, human rights and free markets are not evil in themselves, and have proven beneficial to Western and some Eastern countries. However, the devil is always in the details. These liberal ideas, especially democracy and its implementation, have caused century-long arguments even in the countries where they were originally developed. Therefore, it should be of no surprise that attempts to base foreign policy on liberal ideas continue to provoke new international controversies.

Debates on how to define democracy are a significant part of political science, and are far from being over. The recent history of the Arab Spring and, now, the failed coup in Turkey brings these disputes back to life. If “promoting freedom and democracy and protecting human rights around the world are central to U.S. foreign policy,” the United States inevitably becomes a participant in these arguments, which have caused a lot of bloodshed. In that case, one can argue that the security stance of the United States may suffer, both in the region and globally.

In recent history, before Turkey, we witnessed another country with a complicated interplay of democracy, Islamism, military power and American security interests: Egypt. However, despite the similarities, the situation in Egypt differed from what is happening now in Turkey. The biggest difference is the fact that, at least in Egypt, it was possible to distinguish the sides in domestic political battles. In Turkey, on the other hand, even leading experts are unable to draw a clear line between politics and the military, popular will and authoritarianism, democracy and Islamism, counterterrorism and protection of human rights. This perplexity makes it difficult for the United States and the European Union to find a balance in their relations with Turkey, between democratic rhetoric and security interests.

In Egypt, the United States stood by its ally, Hosni Mubarak, for several decades. Although Mubarak held the rank of air chief marshal, there was formally no military dictatorship. Elections were held, which Mubarak consistently won. Was it a democracy? Many activists persecuted by Mubarak regime, who at times received American support, would not agree. However, even after the massive demonstrations against the regime started in 2011, the United States continued to support Mubarak. Later, Washington withdrew that support and supported the democratization process that began after Mubarak’s ouster. As a result of the democratization started by no less than the Supreme Council of the Armed Forces, the Islamist Muslim Brotherhood gained power. In 2013, the democratically elected president representing the Muslim Brotherhood, Mohamed Morsi, was removed by the military with public support. In 2014, Field Marshal Abdel Fattah el-Sisi became president.

Numerous questions emerged at every stage of this process on whether these developments were democratic. Washington has mostly preferred not to reach conclusions on the subject, and continued its partnership with the Supreme Council of the Armed Forces, with Morsi and, now, with Sisi. Considering Egypt’s importance to regional security, it is easy to understand why the United States de facto abstained from deciding what was democratic. This decision was simple because, democracy or not, the situation in Egypt was always clear on the locus of public support and the identity of the main players.

It is far less so now in Turkey. Erdoğan has blamed Fethullah Gülen, also an Islamist, for the coup. The military is divided, and Erdoğan remains unpopular within a broad segment of the public worried about his authoritarian tendencies and policies, which could alter the secular character of the Turkish state. In such a situation, after years of foreign policy based on promoting democracy, it is very hard for Washington and European capitals to make their choice. So far, security interests have prevailed. Turkey is a NATO member and, at the very least, crucial for the very difficult and important war against ISIS. That explains the rather muted criticism from the West. Nonetheless, the diplomatic balance is becoming more difficult for Western officials to sustain—especially when the Turkish authorities continue adopting new restrictive measures against those accused of participating or supporting the coup, and the international media becomes more critical of Erdoğan.

In such a situation, any new statement from Western officials criticizing what is happening in Turkey, not to mention any Western moves against Ankara, gives Erdoğan a new reason to blame the coup on foreign support and to take new measures against domestic enemies. Should Western leaders choose to avoid criticizing Erdoğan, they risk losing at least some of their domestic support. An ideologically loaded foreign policy does not allow the clear separation of particular national, in this case, security interests from internal political discussions.

Today, European politicians might be in an even more difficult position than their American counterparts. In the United States, the presidential campaign does not leave much space for discussions on Turkey. In Europe, Erdoğan and Turkey have always had enough opponents—even before the coup. Today, those opponents have new arguments to demand drastic measures against Ankara. Although there are no reasons to expect that this type of campaign will produce any kind of sanctions against Turkey, it has become obvious that EU-Turkey and U.S.-Turkey relations have sustained significant damage. It is has also become clear that foreign policy based on ideology limits space for Western diplomatic maneuvers.