The Pros and Cons of a Korean War Peace Treaty 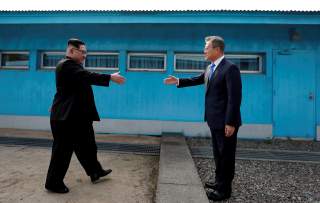 In the Panmunjom Declaration, South Korean president Moon Jae-in and North Korean leader Kim Jong-un stated a goal of “declaring an end to the [Korean] War, turning the armistice into a peace treaty, and establishing a permanent and solid peace regime.” Rumors are intensifying that the two Koreas hope to declare an end to the Korean War at September’s United Nations General Assembly meetings in New York City. The United States has said that North Korea needs to make progress towards denuclearization before the war can end, while North Korea has stated that ending the war is the next step that must be taken. After the end of the war is declared, the next step will be developing a peace treaty to outline the conditions of a divided post-war Korean Peninsula.

With North Korea unlikely to change its position, the United States is weighing whether declaring an end to the war will support the U.S. goal of denuclearizing North Korea. Ultimately, a declaration is a confidence-building measure with huge symbolic meaning to the people of the Korean Peninsula, but it alone will not change the security situation and build sustainable peace on the peninsula. What really matters is the substance and implementation of the peace treaty that would follow the declaration.

Declaring the end of the war and enacting a treaty will not be a straightforward process. Here are critical questions the Trump administration must ask if it wants to make sure that a treaty contributes meaningfully towards the peace and stability of the Korean Peninsula:

Who signs the treaty? Representatives of the Chinese People’s Volunteer Army, the Korean People’s Army, and United Nations Command (which was led by the United States) signed the armistice that ended the hostilities of the Korean War in 1953. South Korea is not party to the document as its then-leader Syngman Rhee refused to accept a divided Korean peninsula. Given this, South Korean president Moon Jae-in and North Korean leader Kim Jong-un said in the Panmunjom Declaration that they would work with China and the United States to get a peace treaty. The UN Security Council and General Assembly could also be required signatories. Given that each party has a different view on what a peaceful Korean peninsula looks like, there is likely to be a drawn-out negotiating process.

What happens to the militaries? What a peace treaty means for the U.S. military presence in South Korea is the question keeping analysts and skeptics up at night. There is concern that North Korea will use the end of the war to demand that the U.S. withdraw or draw down its troops. However, ending the war does not mean that the threat is eliminated. Countries can have hostile relations without being at war—just look at India and Pakistan, or the United States and Iran. If there is to be sustainable peace, the North and South Korean militaries will also need to reevaluate their force posture.

What happens with sanctions? Both Koreas have appealed to the United States for sanctions relief. South Korea cannot pursue some of its inter-Korea projects with sanctions intact, and President Moon has announced an ambitious economic integration plan for the Koreas. North Korea claims that sanctions violate the spirit of the Singapore summit. A peace treaty shouldn't affect the sanctions regime, since the end of the war is not the end of North Korea's illicit programs. However, to an unprepared diplomatic team, sanctions could easily end up entangled in the peace process.

What happens with inter-Korea relations? If both South and North Korea are recognized as valid signatories, a mutually agreed-upon treaty could be interpreted as acceptance of a two-state solution on the Korean peninsula. However, South Korea asserts its sovereignty over the entire peninsula and both Koreas have unification enshrined within their constitutions. North Korea has historically supported a federal system comprised of a North and South Korea. Furthermore, Pyongyang currently appears to support a unified Korea based on the one country, two-systems model, à la China and Hong Kong, with North Korea as China in this scenario. However, South Korea sees unification as a long-term goal built off of economic and ideological integration.

If the war ends and neither country can position the other as an illegitimate government, it will be important to track if their respective domestic policies begin acknowledging each other as sovereign nations. Will they amend their constitutions, or will unification remain a goal of both governments? If both governments still claim to seek unification, is the peace treaty a security guarantee that either Korea can accept? Is the United States also prepared to accept North Korea as its own nation and establish diplomatic ties?

Like the Panmunjom Declaration and the agreement reached in Singapore, a declaration of the end of war will mark the beginning, not the end, of a long process. However, given President Donald Trump’s instinctual approach to policy and his fondness for media attention, there is a concern that the president will rush to make any deal instead of working towards a good deal. The United States should seriously consider declaring an end to the Korean War, but it must keep its eye on the prize and make sure that any subsequent treaty isn’t just a photo-op. Rather, any treaty must contribute meaningfully to peace on the Korean peninsula, and go hand-in-hand with concrete measures towards North Korean denuclearization.

Abby Bard is a research assistant of Asia policy for National Security and International Policy at the Center for American Progress.