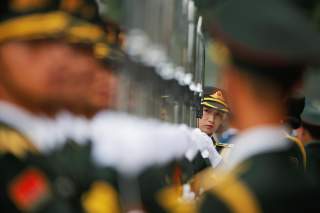 China’s approach to protecting its overseas interests will feature an overlapping array of military, paramilitary, security contractor, and host-nation-provided forces.

Deepening integration into the global economy has underpinned China’s phenomenal economic ascent. However, growing involvement in international trade and investment has opened significant vulnerabilities. According to Chinese authorities, more than twenty thousand of the country’s enterprises are located overseas and more than one hundred million of its citizens travel abroad annually. Dangers in distant lands menace the markets, resources and investments upon which China’s economy now depends. In the words of the country’s 2015 Military Strategy white paper, China has become “more vulnerable to international and regional turmoil, terrorism, piracy, and serious natural disasters and epidemics.”

As Beijing grapples with the realities of an economy increasingly susceptible to disruption from distant influences, experts debate how the People’s Liberation Army (PLA) might protect overseas interests. Some commentators have speculated that China may seek an expeditionary military similar to that of the United States. Others have dismissed such a possibility, citing the country’s slowing economy and the complex demands of its security situation.

This debate often presumes that a definitive assessment hinges on a comparison of the PLA against the U.S. military as the archetype of an expeditionary military. But there are compelling reasons to question this assumption. First, the U.S. military developed its expeditionary capability on the foundations of a post–World War II global network of alliances that China conspicuously lacks. The alliances both enabled and drove demand for a powerful U.S. military presence abroad. The United States fought major wars in Korea and Vietnam, for example, in part to defend key allies and uphold the credibility of its security commitments. Because China has no such network, it faces little demand for such a robust capability.

Contrasting threat pictures pose a second important difference. The United States emerged from World War II a global military super power that faced a powerful rival, the Soviet Union, which led its own global network of allies. Partly to counter its geopolitical adversary, the United States maintained a large forward-deployed military capable of fighting major combat operations around the world. For China, threats to its overseas interests stem primarily from nontraditional sources such as terrorism, civil conflict and maritime piracy. To be clear, China does face a growing rivalry with the United States, and the possibility, albeit remote, of a major war cannot be discounted. But in the unlikely event of conflict, such a clash would be fought principally along China’s periphery, where flashpoints continue to fester and the PLA poses the largest threat to U.S. forces. Beyond Asia, China has little conventional capacity to contest U.S. power, and little incentive to develop such a capability, given the overwhelming combined power of the United States and its allies.

Third, important political and economic differences inform the evolution of the respective militaries of the two countries. The United States built a robust expeditionary military during a period in which it enjoyed exceptional security along its periphery. Moreover, the postwar period saw the U.S. economy at its most prosperous, enabling generous funding of a globally distributed force. By contrast, China maintains substantial military forces near its borders to keep a watchful eye on many of its neighbors, with whom China has uneasy relations. And as the country’s economy slows, the population ages, and demand for social services increase, the desire to field a more capable military abroad will likely compete with other pressing spending priorities. These realities provide an incentive for China to commit a smaller portion of its military forces abroad than the United States could afford and to minimize the expense of overseas military commitments.

China’s Reliance on a Broad Array of Security Forces

China’s approach to protecting overseas interests will thus likely involve an overlapping mixture of PLA, paramilitary forces, civilian contractors and local security forces provided by nations hosting major Chinese assets. State-owned companies will likely also play an important role in providing needed ports and bases, as well as logistics and maintenance support. Many of these forces are likely to be charged with narrowly defined tasks and may cooperate with one another only sporadically, if at all. In many ways, such an approach reflects the way China has managed threats along its periphery. In both cases, China has found non-PLA forces useful as a means of defending national interests in a manner that minimizes the risk of war. The military plays an important, but limited, role that is mostly restricted to deterrence and the execution of specialized tasks, such as reconnaissance. Moreover, in both cases, China has relied on state-owned companies to build facilities that could be used for either commercial or military purposes.

From a broader perspective, China’s approach to protecting its overseas interests replicates in exaggerated form trends already apparent in western countries. Declining defense budgets, low public tolerance for costly overseas entanglements, and the persistence and seeming insolubility of security threats in diverse parts of the world have led the United States and Europe to involve more defense contractors in their overseas operations, press partner countries to step up contributions on security affairs, and narrow the focus of their combat operations to address only the most pressing threats, while leaving broader security problems unresolved. China shares some of these concerns and assessments, and its own limitations and inclinations provide strong incentives for it to borrow many of these practices even as it develops its own path.

China’s likely approach suggests both opportunities and limits to the prospects of cooperation with the United States in the international arena. Paradoxically, the prospects for cooperation may be highest in domains suited to military operations, especially such non-war missions as disaster relief and countering maritime piracy, because of U.S. strengths in these domains and clearer shared interests between the two countries. However, areas featuring paramilitary assets and Chinese-backed host-nation security forces may offer more limited areas of cooperation. Paramilitary forces are more likely to operate under the authority of laws or frameworks influenced by Chinese political values that may be at odds with those of the United States. Differing interpretations of terrorism, for example, could continue to impair collaboration between the two countries in countering some threats.

In some cases, China’s pursuit of security abroad could encroach on U.S. interests. In particular, Chinese efforts to arm and equip friendly host-nation-provided security forces in areas of South Asia, the Middle East, or Africa could complicate U.S. efforts to promote its security and those of its allies and partners in the same areas. China’s desire to cultivate ties with Iran—a key energy supplier—could lead Beijing to provide advanced weapons that Tehran could employ against countries allied with the United States, or against U.S. forces themselves. Similarly, Beijing may step up arms sales to help equip the governments of the Philippines, Thailand, Indonesia, and others to suppress domestic insurgencies that threaten Chinese investments. Growing dependence on China for security could expose those same countries to pressure from Beijing.

In coming years, U.S. military officials may find China operating a variety of military and nonmilitary forces to advance its own security interests. Deepening one’s understanding of China’s distinctive approach to protecting its overseas interests could help U.S. planners anticipate areas of possible collaboration and competition.

This article contains excerpts from the RAND Report, China's Pursuit of Overseas Security.