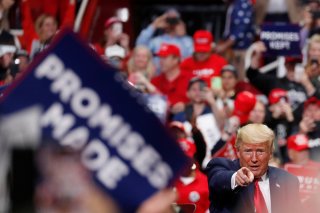 A growing number of observers and Democratic activists are concerned that the president and the Republican party will engage in voter suppression, delay the fall elections, or refuse to abide by the results. These issues need to be addressed now because critics see voter suppression already taking place, and putting large-scale vote-by-mail operations in place requires months of preparations. Among the major sources of the concern are the pandemic, which already has led to the rescheduling of several elections, and the president’s rhetoric, which  includes repeated suggestions that various elections that have taken place, as well as the upcoming 2020 election, are “rigged.”

The concerns raised by the coronavirus have been spelled out by David Cole, an influential progressive law professor at Georgetown: “in the coronavirus pandemic, Republicans may have discovered the ultimate voter suppression tactic. For years they have sought to erect obstacles to voting, imposing strict voter identification requirements, limiting registration opportunities, purging voter rolls, and opposing early voting—all ostensibly in the name of fighting in-person ‘voter fraud,’ even though there is virtually no evidence that anyone unlawfully impersonates a voter at the polls. Many Republicans believe that low voter turnout favors them, because older and wealthier citizens, disproportionately Republican, vote more regularly than younger and poorer citizens, who tend to favor Democrats. But the suppression tactics the party has previously pursued pale in comparison to fear of contracting a deadly disease, which is certain to deter many people from going to the polls. And that’s apparently how some Republicans like it.”

Several primaries and local elections have been rescheduled because of the coronavirus, which is viewed as a precedent by those who fear that Trump will attempt to delay the November election. When asked about this, Trump’s son-in-law and adviser Jared Kushner once stated, “I’m not sure I can commit one way or another.” Historian and author Jon Meacham wrote in an op-ed published by the New York Times in March about “the possibility that President Trump might take advantage of the unfolding health crisis to delay the November election.” He said, “Alarmist? Not for anyone who’s paid even glancing attention to the president’s will to power and contempt for constitutional convention.” Former Vice President Joe Biden stated, “Mark my words, I think he is going to try to kick back the election somehow, come up with some rationale why it can’t be held.”

New York Times reporter Katie Glueck dismissed this concern. “Mr. Trump has not moved to delay the election, and Mr. Biden, who once taught constitutional law, most likely knows as well as the voting experts do that it would be exceedingly difficult to postpone the election and that the president does not have the authority to unilaterally take such action,” she reported. The timing of federal elections is set by law (one that was passed in 1845), which means that Congress would have to pass a new law to move the election.

Not Accepting the Election Results

Speaker of the House Nancy Pelosi stated that the Democrats must win “big” in order “to inoculate against” the potential that Trump might challenge the results of the election. Trump often claims that this or that election is rigged or corrupted—even when he won.

In 2016, Trump talked about fraud in the months leading up to the election, going so far as to repeatedly repudiate efforts to get him to commit to honoring the results of the election before they took place. After he won, he nevertheless challenged the results, repeatedly claiming—without any evidence—that voter fraud was the only reason he did not win the popular vote. He asserted that his popular vote loss was due to the unlawful votes of three to five million noncitizens. As University College London Assistant Professor Brian Klaas wrote in an op-ed published the Washington Post, “If Trump claimed that an election he won was rigged, what will he do with an election he loses?” Recently, Trump wrote that an election conducted by “Mail In Ballots . . . will be the greatest Rigged Election in history” and called it a “Scam.” As Bazelon writes, “A candidate who warns now about fraud and chaos, as Trump is ceaselessly doing, is sowing the seeds for his supporters to distrust the results if he loses.”

Actually, fraud in voting is very rare. In Colorado, 95 percent of people voting in the 2018 election cast absentee ballots. Jena Griswold, the secretary of state, explained, “When we think there is the possibility of double voting, we send every case to the attorney general. Our number for 2018 was 0.0027 percent.” An expert on elections, Kenneth Mayer, of the University of Wisconsin-Madison, stated, “This has been shown over and over. The continued insistence that there are material levels of intentional voter fraud is itself a form of fraud.” Nevertheless, Trump has kept up his assault on vote-by-mail, threatening states with a loss of federal funds if they moved forward with efforts to increase voting by mail.

The fact is that Trump has shown little respect for democratic norms and several laws. For instance, he called the constitutional requirements on emoluments “phony,” refused to supply Congress with documents and to allow his staff to testify, and otherwise engaged in many norm-violations—and some potentially illegal use of executive power, adds to the concerns of Democrats and others. They wonder what would happen if the matter ends up in the Supreme Court, which has become ever more conservative since it granted the contested 2000 election to Bush over Gore.

What Can Be Done