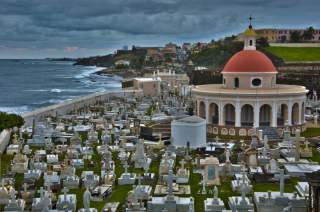 Puerto Rico distills 70 percent of the rum consumed in the United States. We might surmise that both borrowers and lenders were imbibing too much if they failed to foresee the island territory’s recent default. Puerto Rico has been in a recession for a decade with little sign of emergence. A chronic budget deficit, a bloated public sector, an economy in shambles and highly tax-advantaged bonds that encouraged investors to stay too long were all warning signs to observers.

The Puerto Rican labor force has declined 10 percent from its peak in 2000 (from over 1 million in 2000 to 900,000 as of June 2015). A quarter of all people employed on the island work for the government—either “state” or local. A declining labor force is symptomatic of a negative trend in the overall population for the island, with a more than a 7-percent decline since the 2004 peak. The GDP has followed population and the labor force lower, exacerbating the debt/GDP ratio in the process.

Some of these issues stem from “mainland” policies that, when combined with local economics, create disincentives. A prime example is the interaction between minimum wage and welfare benefits. According to Krueger, Teja and Wolfe, the combination of a high minimum wage and a swelled welfare benefit produces a significant discouragement to finding work. Further, 28 percent of hourly workers in Puerto Rico earn less than $8.50 (in the United States, it is about 2 percent) and would take home approximately $1,159 per month compared to a welfare benefit of over $1,700.

These dynamics have driven down the labor-force participation rate to around 40 percent. Combined with the population decline, it is exceedingly difficult to imagine how the Puerto Rican workforce will return to pre-recession levels.

Policies that make sense for the U.S. mainland economy should not automatically be imposed on Puerto Rico. Puerto Rico is a tropical island with no exploitable natural resources. While the United States has a low cost advantage in electricity pricing and low fixed costs of manufacturing, Puerto Rico relies on oil to generate its electricity, making it high cost and inefficient.

Until recently, territories received tax advantages for economic-development purposes. The idea was to “assist the US possessions in obtaining employment producing investments by US corporations.” Following 2005, IRS section 936 was no longer available to corporations, and the tax benefits to U.S. mainland firms—particularly pharmaceutical companies—evaporated. (There was a significant amount of skepticism as to whether 936 was useful in developing the economy of Puerto Rico, or simply a way to lower corporate tax bills. On the other hand, it may be coincidental, but the current recession began when the tax advantages ended.)

But by no means were U.S. mainland policies and the end of 936 responsible for Puerto Rico’s debt accumulation. Instead, Puerto Rico simply overspent, and diluted the urgency of the situation by making budget predictions that had no basis in reality—not to mention that its financial reporting is not timely enough to catch and reduce spending. Puerto Rico’s debt level, over 100 percent of national product (depending on how accurately the inflation rate is measured), is unsustainable. Not only due to the absolute level of the debt, but due to the shrinking taxable base.

Some level of government employs 25 percent of all working people. Even PREPA, the pseudo-state-run electric utility, is highly over-staffed by most metrics. Reforming and right-sizing government and pseudo-government entities would have been useful reforms. Now it appears the holders of PREPA’s debt will be ensuring the operation becomes leaner. Puerto Rico needs immediate reforms to reduce future burdens on the government (such as the continuing high number of teachers, despite the decline in the population of school-age children).

It has yet to be determined how the obligations, which are mostly tied to specific revenue streams, are resolved when in arrears. Because Puerto Rico will (likely) not be bailed out, market mechanisms will sort out a solution. This is far different from the Greek experience, and—while likely cut off from debt markets—Puerto Rico will maintain its autonomy and governance.

Puerto Rico will be forced to deal with its issues quickly. The territory’s creditors may have to suffer through legal challenges, but there will be assets transferred and debts—at least partially—repaid. The economy was in decline before the Great Recession, and it is going to take time for the economy to recover. In fact, the more Puerto Rico is forced to turn over to private hands, the faster it may recover. Without support—such as the return of section 936 and other pro-growth, low-opposition measures—Puerto Rico will be mired in a protracted economic downturn that could further exacerbate the debt problem. So, have a glass of rum, and look around for the next set of intoxicated borrowers and lenders.