Pulling Germany's Military Back from the Brink 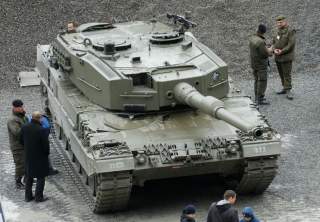 In his recent article “Is Germany's Military Dying?”, Kyle Mizokami worries that massive underfunding might sound the death knell for the long-suffering German armed forces. But for the Bundeswehr, an old German saying might apply: Those declared dead live longer. Embarrassing news in recent months about repeated equipment failures, grounded helicopters and units scrounging for equipment in order to deploy seem to have provoked a somber reassessment of the importance of military readiness among the German political and media elites.

A seemingly endless string of bad news started in September 2014, when it became publicly known that none of the German navy’s twenty-two Sea Lynx anti-submarine warfare helicopters were operational. Only days later, a 1960s-vintage Luftwaffe Transall cargo aircraft broke down in Turkey during a mission to deliver German weapon shipments to Kurdish Peshmerga fighters in Iraq. A similar incident stranded another German Transall en route to Senegal during a mission to support relief workers combating the Ebola virus in West Africa.

But that was just the tip of the iceberg. An official Bundeswehr report on the “Material readiness of the Armed Services” revealed serious readiness challenges with almost every major weapon system in the German inventory. Out of the German army’s thirty-one Tiger attack helicopters, only ten were operational while only eight out of thirty-three NH-90 transport helicopters were ready for duty. Meanwhile, the Luftwaffe could only deploy forty-two of its 109 Eurofighter Typhoon multirole fighters and only twenty-four of the fifty-six remaining Transalls were available at any given time.

These problems were further compounded by the fact that desperately needed replacement systems were delivered years behind schedule, considerably over budget and with only limited capabilities. The Luftwaffe, for example, has only received one out of the fifty-three new A-400M transport planes it has on order to replace the ageing Transall fleet. But the A400 has only just reached initial operational capability (IOC). It’s not yet able to drop paratroopers nor can it be send on international deployments since it is lacking a missile defense system.

The Bundeswehr’s equipment problems come at a time when Germany seeks a greater role in international crisis management. Particularly, German defense minister Ursula von der Leyen seems willing to test the country’s traditional postwar “military reticence.” Shortly after taking office, von der Leyen used a speech at the Munich Security Conference in January 2014 to advocate for greater German engagement. “To sit and wait is not an option. If we have means, if we have capabilities, we have the obligation and we have the responsibility to engage,” she declared. But von der Leyen is not alone. In his opening remarks at the conference, German president Joachim Gauck declared: “When the last resort - sending in the Bundeswehr - comes to be discussed, Germany should not say 'no' on principle.” Moreover, the German government is expected to release a new national security white paper in 2016 that will likely stress the nation’s growing international role and increased security responsibilities.

The German government seems to be reassessing the so-called “peace dividend” that led to Germany’s defense budget shrinking to just 1.2 percent of gross domestic product in 2015. In March 2015, the Merkel government announced a 6.2 percent increase in the defense budget over the next five years, which provides for an additional €8 billion (US $8.5 billion) by 2019. While a large portion of the money will be used to compensate for higher personnel costs, there would also be substantial portion will go towards modernization, maintenance and improved training. As a result, this year the German military is expected to send 154,000 of its roughly 180,000 active soldiers abroad to participate in military exercises. That’s a marked increase from 73,000 send abroad in 2013.

But there are those who are calling for further budgetary plus ups for the Bundeswehr. Outgoing German army chief of staff Gen. Bruno Kasdorf has remarked that the military needs an additional  €20 billion in funding until 2025 to complete its modernization efforts. Other voices in Berlin concur, the new parliamentary ombudsman for the armed forces, Hans-Peter Bartel, has demanded that the Bundeswehr move away from “hollow structures” and “restore the capability for collective defense.” This would cost additional “billions over the next years.”

Other political decisions indicate a turnaround for the German military as well. Minister von der Leyen has announced that the Bundeswehr will abolish its “dynamic equipment management.” Under the dynamic equipment management program, German units would normally only receive seventy percent of their equipment and only be brought up to full capacity for exercises and deployments in order to save money. The result was that German army units like Panzergrenadierbataillon 371, a mechanized infantry battalion with thirty Marder infantry fighting vehicles (IFVs), had to scrounge together 15,000 pieces of equipment from fifty-six units across Germany when it was assigned to NATO’s Very High Readiness Joint Task Force (VJTF).

Von der Leyen’s decision to maintain a full equipment complement for all units forced the German army to buy 100 additional Leopard 2 Main Battle Tanks (MBTs). The additional tanks brought the Bundeswehr panzer fleet back to its 2010 standard of six armor battalions with a total of 328 MBTs. All Leopard 2s in the German arsenal are expected to be brought up to the modern 2A7 standard. In November 2014, the Federal Ministry of Defense also announced the acquisition of 131 additional Boxer armored personnel carriers (APCs) for €620 million ($691 million). Additional purchases and reactivations of mothballed equipment are expected for the PzH 2000 and Multiple Launch Rocket System artillery as well as the new Puma IFV.

Moreover, a 2010 decision to halt the acquisition of spare parts in order to lower costs has also been reversed. The Bundeswehr is expected to invest up to €6 billion ($6.7 billion) in repairing deficient weapon systems. Germany has also initiated a major reform of its weapons and equipment acquisition process, and aims to meet the NATO-target of twenty percent of defense expenditures for investments from 2016 onwards.

On the operational side there have also been a series of encouraging developments. Germany and Norway took a lead role in the setup of a new NATO task force to reassure the alliance’s Eastern member states vis-à-vis Russia, pledging 4,000 soldiers in support of the new measure. The Luftwaffe has dispatched additional Eurofighters for air policing duties in the Baltics. Meanwhile, German paratroopers and naval vessels have been involved in the largest NATO exercises since the end of the Cold War in Eastern Europe and the Baltic Sea.

While Germany has shown no inclination to join the United States, France and the UK in undertaking airstrikes against ISIS in Iraq and Syria, the decision to dispatch military advisors and substantial weapon shipments in support of Kurdish fighters in August 2014 was an unexpected break with the traditional German policy of noninterference in conflict areas. The latest news from Berlin is that Germany also considers widening its participation in the UN-mission in Northern Mali, which has an active combat mandate to fight Islamist insurgents.

The coming years will show if Germany is truly ready to underwrite its alliance commitment and a greater engagement abroad by raising the country’s international security profile and boosting its military capabilities. This will take both political will and substantial financial investments. For now however, the signals coming from Berlin seem to indicate that when it comes to the Bundeswehr, the glass is half full rather than half empty.

Georg Löfflman teaches US Foreign Policy and Security Studies at the University of Warwick in the UK. He has a PhD in Politics and International Studies. His work on grand strategy and security policy has been published in Geopolitics and Critical Studies on Security.