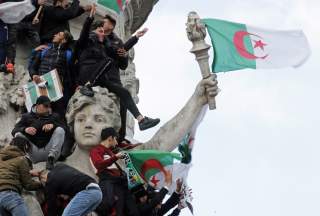 For over a month, protestors have flooded the streets in Algeria, calling for change. These protests, by some estimates the largest Algeria has seen in decades, were initially ignited by the announcement of President Abdelaziz Bouteflika’s candidacy for a fifth term in office.

In reality, Bouteflika is nothing more than a straw president, having been rendered infirm by a debilitating stroke in 2013. Since that point, a powerful group consisting of generals, businessmen, politicians, and Bouteflika’s brother, Said, have coalesced around him, ruling the country in his name. His bid for a fifth term is nothing more than an attempt by this elite group— called le pouvoir—to maintain their grip on power.

In early March, with elections rapidly approaching in April, these ruling elites tapped Bouteflika once more. This decision came both from their failure to agree upon a potential successor and the assumption that, due to his role in ending the violent civil war of the early 1990s, Bouteflika maintains broad public support. They were wrong. Since then, the country has risen in protest demanding a change in leadership, and they have actually achieved a measure of success. Recently, Bouteflika (or rather le pouvoir) caved to the demands of the protesters and withdrew his presidential bid, but the protests did not end. Instead, Algerians, skeptical of Bouteflika’s promises of political and constitutional reforms, took to the streets once again to object to his decision to postpone the April elections, in favor of a constitutional referendum at the end of the year.

The success of the protestors is encouraging. Perhaps this is the Algerian Arab Spring that its citizens have been waiting for. Yet, there is reason to pause, as we have seen this type of wishful thinking before.

Throughout these extended weeks of protests, academics, news anchors and more have compared the Algerian movement to the Arab Spring. The most pertinent point of comparison has been Egypt in 2011, where significant protests led to the ouster of then-president Hosni Mubarak from power. There are many similarities between the two: protests were sparked by a desire to end a corrupt and oppressive regime, both countries are governed by a system of powerful elites with little accountability, the military is a monolithic entity that reinforces the status quo, and the elections that occur are hardly free and fair.

But perhaps the most important similarity, and maybe the most disappointing, is the result of these protests. Given the institutions of power and corruption that plague both Egypt and Algeria, it isn’t enough for protestors to simply remove one ruler for another. In both countries, there must be true institutional change—constitutional reforms, voting rights, and a functioning legal system—before citizens and the world can claim the success of their revolution.

In the post–Arab Spring, Egypt did not transition from the oppressive Mubarak regime to a democratically-led society. Rather, the country has become more authoritarian over the last five years. This is certainly not the “Arab Spring” the Algerians want or deserve.

Already, there are visible cracks in Bouteflika and the ruling elites’ promises. In 2008 and 2011, these elites proposed constitutional amendments that resulted in the strengthening of the individual power of the president. While new language was added to the constitution in 2016, many criticized this as a move by Bouteflika to avoid tangible changes. The amendments prohibited Algerian dual nationals from holding key government positions, added Tamazight to the country’s official languages and “limited” the country’s president to two terms in office (although this limit was soon lifted). There has been little evidence that past constitutional changes in Algeria have done anything other than strengthen the powers of the ruling elite and reinforce the mechanisms of oppression in the country. Considering the shortcomings of these past constitutional reforms—if we can even call them that—it is ludicrous to suggest that the current attempt at reform will be any different from the precedent. Furthermore, it is unlikely that le pouvoir and friends will give up their power quite so willingly.

In the meantime, Algeria’s army has seemingly shifted its allegiance from Bouteflika to the people, a change that some might argue represents a step in the right direction. In his statement on the twenty-sixth, Algerian chief of staff Lt. Gen. Ahmed Gaid Salah declared Bouteflika to be “unfit” for rule, and encouraged the Constitutional Council to enact Article 102 which would remove the president from office. But, before there is a sigh of relief or hopeful remarks, let us remind ourselves what the Algerian military really cares about: maintenance of the status quo.

Throughout Bouteflika’s regime, these military elites have benefitted from seemingly untouchable power and prestige. Now, they’re willing to turn their backs on him, but not because they’ve aligned with the people. Instead, it is because the fight to keep Bouteflika has reached too high a cost, and the elites aren’t willing to sacrifice the system that allows their dominance. By “joining” the people, the military can maintain its power behind the scenes and Bouteflika will be the fall guy. While his removal is significant, what really matters, which we know from the failures in Egypt, is substantive change to the entire corrupt system, perhaps by dismissing several military elites themselves.

But this isn’t necessarily the end for Algerians. There is a pathway to a more open society, but it will take hard work at all levels of society. The opposition needs to strengthen and cooperate in order to run a viable candidate for elections. They need to win the full and real support of the military—a difficult task, given the military’s infatuation with the status quo. The opposition must tread carefully, for if it invokes military intervention, it will bring a swift end to any budding possibility of change. Additionally, as some opposition leaders have begun to understand, it is critical that they don’t lose the support of the non-political youth who began the protests by over-politicizing or polarizing the situation.

The Algerian people must stand together in preventing the regime from delaying the upcoming elections and the necessary, peaceful transition of power. This stalling tactic employed by the regime is simply another way for it to preserve power. This must be stopped. To do so, the April elections must occur, so that work can begin on rebuilding the political, constitutional, and legal systems of Algeria in a way that is democratic, just, and equal.

Democracy may be won by the people, but it is supported and maintained by the institutions. Without legitimate institutional change, Algeria is faced with the unpleasant prospect of becoming another failed revolution.

Katharine Poppe is a research associate for Middle East studies at the Council on Foreign Relations.

Rachel Cook is a student in the Elliott School of International Affairs at George Washington University.