In Pursuit of an 'Olympic Truce' on the Korean Peninsula 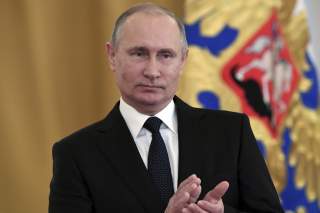 If Russia’s hinterlands are hurting badly due to sanctions, this was not apparent on a recent visit to Vladivostok. Nearly ten thousand kilometers from Moscow, this frigid Pacific metropolis in December was bursting with Chinese tourists. Restaurants seemed to be crowded and the roads were jam-packed with luxury cars. Most telling, the port was full of merchant vessels going hither and thither and a number of sprawling, newish factories were visible just north of town on the way to the modern airport. Such conditions not only likely reflect the Kremlin’s “turning to the East” [поворот на восток] but also the fact that Russia’s Asia-Pacific neighbors, notably South Korea and even Japan, in addition to China obviously, never went in for stringent sanctions against Russia.

Indeed, President Vladimir Putin’s September visit with both Prime Minister Shinzo Abe and also President Moon Jae-in in Vladivostok may have had greater significance than was originally appreciated. Even as Moscow has gone along with the ever-tightening sanctions regime, Russia has somewhat improbably become perhaps the key “lynchpin” for maintaining peace on the Korean Peninsula. For at least three reasons, Russia seems to now supersede China as the key “go between.” First, China is too close to North Korea, both geographically and culturally. Thus, it cannot but pose a kind of threat to Pyongyang by the very nature of China’s rise and ever-spreading influence. Second, and more fundamentally, Beijing has not shown nearly the appetite that Moscow has for directly challenging the West. Thus, the ‘Syrian model,’ one in which the Kremlin stands by its clients despite all threats and criticism from the West, seems to have gone down well in Pyongyang. The Chinese, by contrast, appear to be more or less reviled by the North Koreans—a trend reinforced to me during a recent trip to Beijing. So, it is well past time that American decisionmakers get to know Russia’s best North Korea experts, since they may well be some of the only people capable of brokering a deal, and thus saving the planet (literally) from catastrophe.

I will endeavor to introduce a few of these people and their ideas for mitigating the crisis in this new Russia-focused Bear Cave column, but let us go to the beginning with Dr. Georgi Toloraya, Director of Korean Programs at the Institute of Economy at the Russian Academy of Science. He is an expert who has spent more than a decade in Pyongyang. In a late November 2017 piece published on the website Газета.Ру, he contends: “the North Korean issue has now got the attention of the country’s most senior leadership” [к северокорейской проблеме сейчас приковано внимание высшего руководства страны] and by this he means Putin, of course. He surmises that the U.S. military is not actually eager to fight, but that there are some in the Trump administration’s inner circle that believe that the North Koreans can be intimidated. He observes that a theory has arisen in Washington DC that the United States might strike against certain targets in North Korea (e.g. rocket launch pads) without igniting a full blown response from North Korea. For Toloraya, “It’s a very dangerous direction of thinking.” [Это очень опасное направление мыслей].

Tolaraya further recounts that North Koreans are talking about an atmospheric nuclear test. In Vladivostok, other Russian experts that meet regularly with North Koreans offered a similar warning, even suggesting that such a test could come during the Olympics. But Toloraya, nonetheless, still maintains that “chances for agreement on a settlement remain” [пока шансы на договорное урегулирование остаются]. He observes that many American specialists recognize that sanctions are unlikely to work. Moreover, he is encouraged that some segments of the American “Establishment” are seriously considering the joint Russian-Chinese proposal for “Double Freeze.” Indeed, the title of this particular article by Toloraya is “Formula for Peace: Korea Needs ‘Double Freeze’” [Формула мира: Корее нужна двойная заморозка]. Thus, Tolaraya recommends: “Moscow must step up its work on the diplomatic level” [Москве надо еще сильней наращивать работу на дипломатическом направлении] to promote the only serious (if imperfect) negotiated settlement that is currently on the table.

This Russian expert makes the observation that Washington might well be mishandling its crisis signaling. For example, Tolaraya notes that the United States had declared that a “pause” on North Korean testing would create an atmosphere for negotiations. However, during such a pause, he notes that “In return, they [the North Koreans] received new sanctions as ‘terrorists’” [Взамен они получили новые санкции как ‘террористы’]. Moreover, he states that the phenomena of one U.S. administration undoing the agreements of prior administrations – a tendency the North Koreans are apparently well acquainted with, according to Toloraya – means that “… it is very hard to make agreements with Americans …” [договариваться с американцами очень трудно]. This situation does not facilitate peace in these difficult circumstances.

For the North Koreans, Tolaraya says they will have to agree not to deploy ICBMs and show a willingness to forswear any kind of proliferation to other states. But he warns that once the gears are turning on a new and ever larger annual joint U.S.-South Korea exercise early in 2018 that “the chance for ‘double freeze’ will actually be missed” [шанс на “двойную заморозку” будет фактически упущен.] For Russia, he importunes regarding this urgency: “Our country in these conditions must work in all directions, to convince the Americans and North Koreans of the need to move away from the dangerous line.” [Нашей стране в этих условиях необходимо работать по всем направлениям, убеждать американцев и северокорейцев в необходимости отойти от опасной черты]

To gather Toloraya’s insights, one does not actually need to know Russian, as he frequently writes essays in English too, thankfully. These include one that appeared on the Johns Hopkins website “38 North” in mid-December. The tone is logically more polite and respectful, as he repeatedly calls for “American leadership.” Based on “interviews with North Korean representatives,” his unique analysis should be getting very close attention in Washington DC. While finding that generally Pyonyang’s viewpoint is that its nuclear weaponry is “non-negotiable,” he makes important probes into the question of how North Korea might respond if the United States ended its “hostile policy,” and even suggests a promising opening in the form of a Korean Peninsula or Northeast Asia “nuclear free zone” that could be reached gradually. Other creative compromises are usefully broached. For example: an agreement in which Pyongyang agrees to forgo ICBM deployment in exchange for Washington’s acceptance of some North Korean nuclear capability. Above all, Toloraya sees an urgency to remove the seeming imperative for North Korea to demonstrate that it has a working nuclear warhead. He strongly advocates for an “Olympic Truce,” noting that South Korea has every reason to support compromise measures that calm tensions in the short term. Again, he underlines that this “window of opportunity” will not remain open for long and U.S. diplomats must work with other regional states immediately to reach for a short-term compromise that makes a solid start on stabilizing this incredibly dangerous situation.

Tolaraya might just have the future of the world on his shoulders. He is likely one of the few people on the planet with excellent contacts in both Pyongyang and also Washington DC—not to mention decades of experience working on this delicate issue.

The “blob” in Washington needs to accept that it's ongoing endeavor to thoroughly despoil U.S.-Russian relations could actually have extremely deleterious effects—not least preventing skilled Russian specialists from acting as crucial emissaries and go betweens to alleviate this crisis. A foolish New York Times columnist, as recently as mid-December, mocked President Trump for requesting help from the Kremlin in the Korea crisis. But Russia’s help in these circumstances is badly needed, as the crisis appears to go from bad to worse and we stand on the brink of something close to utter catastrophe, if not Armageddon.

A significant Russian diplomatic push spearheaded by Putin himself, and supported by his genuinely capable North Korea experts like Toloraya, to secure a compromise agreement would hardly detract from his election campaign and could quite possibly “kill two birds with one stone” [одним ударом убить двух зайцев], easing tensions simultaneously in Asia, but also in Europe as well. Let’s not forget that Putin did meet directly with Kim Jung-un’s father many years ago in Vladivostok, so there is a precedent. Such a diplomatic master stroke even has the potential to reverse the negative spiral so apparent now in U.S.-Russian relations, as well.