The Pushback Plan: How Taiwan Can Win Diplomatically Against China 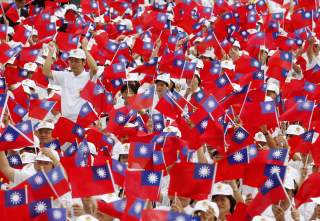 The main entrance of Taiwan’s Ministry of Foreign Affairs is looking increasingly bare these days. Unfortunately, the ministry has been forced to remove five flags of diplomatic allies—including Burkina Faso, Sao Tome and Principe, Dominican Republic, Panama, and El Salvador—over the last two years as China and Taiwan have renewed their competition for recognition globally. Taiwan today is left with just seventeen partners comprised of mostly small impoverished nations predominantly clustered throughout Latin America and the Caribbean, including Oceania.

Beijing’s tightening diplomatic squeeze of Taiwan is part of a larger strategy, including the exploitation of economic, military, and politically subversive pressure points, to bring the island’s president, Tsai Ing-wen, to heel. Tsai has refused to agree to the so-called “1992 Consensus” that would require explicit acknowledgement of the “one China principle.” Her refusal has frustrated Chinese president Xi Jinping who has indicated that cross-Strait reunification is the only acceptable outcome. Without at least the initiation of political talks on Beijing’s terms, China’s pressure campaign is certain to continue, meaning, in the diplomatic domain, Beijing will relentlessly pursue additional Taiwan allies to cross over to its side.

Although it is difficult to identify the country most likely to flip next, there are troubling indications in numerous places. Last month, for example, Taiwan offered to send its ally Nicaragua a $100 million bailout loan as the government deficit in that country has ballooned to $320 million and President Daniel Ortega tries to quell protests against his regime. One cannot help but wonder whether Ortega is simply looking for funds to ensure his own survival, and whether Beijing might offer a better deal to a fellow authoritarian (it would not be the first time Ortega broke ties with Taiwan—he did so in 1985).

Out in the Pacific, the Solomon Islands, another Taiwan partner, is preparing to hold national elections in early April, and Taipei is receiving mixed messages. In January, the ruling party said it would review Taiwan relations if reelected. But earlier this month, the prime minister of the Solomon Islands, Rick Hou, welcomed the Taiwanese deputy foreign minister, Szu-chien Hsu, and noted that “no pressure from others will break” the friendship between the two countries. Even though Palau has enthusiastically supported Taiwan ties, there are rumors that the only real advocate for maintaining bilateral relations is President Tommy Remengesau, and that the rest of his government is displeased with the relationship. Either way, the region is warming up to China. According to the communiqué issued after the Micronesian Presidents’ Summit, held late last month, the Pacific Islands Forum—which includes all six of Taiwan’s remaining partners in Oceania—should demonstrate a greater degree of “hospitality” to Taiwan and China. It is perhaps no coincidence that Tsai will be visiting the region starting on March 21.

And of course, the Vatican last year reached a provisional agreement with Beijing on bishop appointments in China, but as of yet, it is unclear whether a permanent deal might also require breaking formal relations with Taiwan. If the Vatican left Taiwan, then it would constitute an enormous blow to the island’s psyche. The Holy See is Taipei’s sole remaining partner in Europe. However, Taiwan should not worry too much about the Vatican. Xi’s aggressive persecution of Catholicism (and of all religious and civic freedoms these days) by razing churches, desecrating Catholic symbols, and threatening underground worshippers strongly suggests he is unlikely to tolerate the growth in the Catholic faith in China.

Though the Vatican is probably safe from Beijing’s embrace, other poorer states are far less so. China’s billions of dollars in lucrative trade and investment proposals under the Belt and Road Initiative (BRI) are simply too sweet to resist. BRI is particularly attractive to countries with meager means for self-improvement. It offers them the golden opportunity to build up much-needed infrastructure projects in their countries. Taiwan’s foreign minister, Joseph Wu, has repeatedly said that Taipei will not return to the days of “dollar diplomacy” or “checkbook diplomacy” in which Taiwan in the 1990s and early 2000s tried to match China dollar-for-dollar to secure allies worldwide. The approach makes sense because Taipei simply cannot afford to compete.

So where does this leave Taiwan? Unfortunately, it is virtually inevitable that Taipei will lose additional diplomatic allies unless a cross-Strait agreement is reached on the 1992 Consensus. But it is perhaps equally inevitable that Taiwan will convince at least one or more states to recognize Taiwan over China—without falling back into the unwinnable trap of dollar diplomacy. Such a development would be enormously symbolic in that it would help counter the narrative that Taiwan sovereignty is doomed. It would also boost morale in Taiwan and could convince other nations to follow suit. Such a scenario might prompt Chinese leaders to reconsider whether the diplomatic component of their pressure campaign is yielding the desired end state, giving Taiwan a temporary reprieve from the recognition rivalry.

Taiwan’s best hope for regaining diplomatic allies is to calmly present the case to countries up for grabs that Taiwanese assistance—and not China’s BRI—offers a more sustainable path forward. In many cases, the narrative actually writes itself. One needs to look no further than Sri Lanka, the Maldives, Malaysia, and even Beijing’s stalwart ally Pakistan to appreciate the massive amounts of debt that BRI is likely to impose on these nations for many years to come. To be sure, the odds of getting any of these particular countries to flip to Taiwan are extremely low. However, there are others who are likely worth watching closely.

The small Pacific Island nation of Tonga, for example, owes approximately $115 million, or one third of its GDP, to China, and has deferred payment to begin in five years. Tonga had recognized Taiwan up until 1998 and such crushing debt could convince Tonga that Taipei is once again the healthier long-term option. Earlier this month, Vanuatu’s foreign minister, Ralph Regenvanu, added his voice to the growing chorus of concerns that BRI is unhelpful for Pacific Island development. Vanuatu recognized Taiwan for one week in November 2004 until it shifted back due to leadership politics. Nevertheless, frustration with China is clearly on the rise there. A similar situation unfolded in Papua New Guinea, which switched recognition to Taiwan for eleven days in August 1999. By one estimate, Papua New Guinea owes Beijing at least $590 million, representing a quarter of all its external debt. In Africa, the nations of Zambia, Djibouti and Democratic Republic of the Congo appear to be most in debt to China. The Congo recognized Taiwan from 1961 to 1972. Although neither Zambia nor Djibouti share this history, Djibouti, where Beijing notably opened its first overseas military base, owes at least 77 percent of all debt to China. And Zambia’s election in 2006 featured an opposition candidate who threatened to switch Zambia’s recognition to Taiwan.

Political transition further offers Taiwan an opportunity to forge ties with incoming leadership of potential flippers. Taiwan, for example, last month pledged $500,000 in humanitarian assistance to Venezuela’s disputed interim president Juan Guaido. Guaido will certainly look upon Taiwan favorable if he can become the undisputed leader of his country. Last month, El Salvador’s president-elect, Nayib Bukele, publicly questioned his country’s switch to China in 2018, suggesting there is the possibility of resuming ties there as well. He has subsequently criticized his country’s China ties and placed a hold on cancelling the free trade agreement with Taiwan.

Finally, the nature of Taiwan economic assistance and investment in recipient countries tends to be tailored to the agriculture, health, and education fields. Thus, if a state happens to be more interested in these areas than others, then Taipei will have a strategic competitive advantage. For example, the Marshall Islands cited agricultural cooperation as one reason for switching ties from China to Taiwan in 1998.

At the end of the day, Taiwan could receive a morale boost from gaining new or previously lost diplomatic allies, but nothing more. Beijing will still be able to keep Taiwan locked out of international organizations such as the World Health Organization and the International Civil Aviation Organization. Instead, the health of U.S.-Taiwan bilateral relations will be key to helping Taipei balance against China. In my estimation, ties are perhaps the strongest since passage of the Taiwan Relations Act in 1979. In addition, Taiwan’s informal trade and investment ties with countries that do not formally recognize Taiwan, such as Japan, South Korea, India, and many others, will continue to enable Taipei to reduce its economic dependence on the mainland.

As foreign minister Wu persuasively argued at the World Affairs Council in Los Angeles earlier this month, Taiwan is also increasingly investing in a values-based approach to global engagement on issues ranging from religious freedom and democracy promotion to environmental protection and sustainability, and everything in between. Going forward, this could be a real meaningful Taiwan in the eyes of the international community. Through these types of initiatives, Taiwan could gain the sort of respect it deserves as a sovereign nation. Judging Taiwan solely on the basis of diplomatic bean-counting is short-sighted.