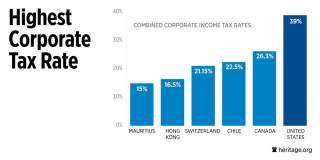 Tell someone that the U.S. tax system needs to be fixed, and you’re not likely to get an argument. Most people agree that tax rates are too high. They object to its complexity and unfairness because it subjects some income to double taxation, even as it provides hundreds of tax breaks for special interests.

Add in the fact that U.S. businesses face the highest tax rates in the developed world, and there’s no doubt that there’s plenty of room for improvement.

Updating the tax code for the twenty-first century requires more than just cutting taxes. True reform should reduce current tax penalties against savings and investment. It should do away with the accumulated carve outs for privileged interests and lower marginal rates for businesses and individuals. Reforms that do that will unleash an economic growth that can benefit all Americans.

A simple system that taxes consumption at low rates would allow individuals to save more and encourage businesses to make greater investments. Removing tax distortions to savings, investment and economic decisionmaking is the necessary ingredient for economic growth and job creation.

For individuals, tax reform should lower marginal rates. High rates inhibit personal savings and can discourage entrepreneurship. It’s always risky to try something new, and when the government insists on taking too big a cut of a would-be entrepreneur’s profits, the individual is far less willing to risk launching a new, uncertain venture.

Lowering individual rates and applying them consistently—i.e., without special breaks for only some people—would help average Americans build a nest egg and retain more earnings, which they could plow back into their business, their child’s education or their retirement plans.

Tax reform is essential to helping American businesses compete successfully in the global marketplace. In addition to significantly lowering our wholly noncompetitive corporate tax rate, lawmakers should allow full expensing of capital investments and end the current policy of trying to tax the foreign earnings of businesses based in the United States.

This is not really controversial stuff. A lower corporate tax rate was included in President Obama’s 2013 tax reform plan. Also, almost all of the necessary provisions are in the Better Way blueprint for tax reform that was House Republicans introduced last year.

Although the principles of pro-growth tax reform are well understood and generally agreed upon, there will doubtless be plenty of political opposition to any effort to update our tax code. Many on the left are already calling proposed reforms “tax cuts for the rich” or “corporate welfare.” These critiques are born of static revenue estimates and “fixed pie” economic thinking.

Everyone benefits when business are able to better invest their profits and entrepreneurs are more willing to innovate. New investment creates jobs and time saving efficiencies. Innovation brings new products to market and builds new business. Thus, pro-growth tax reforms can unleash private investment, encourage job creation and fuel economic growth—none of which are captured in the static income distributions used by critics of tax reform.

A healthy and growing economy benefits everyone because it provides individuals with higher take-home pay and allows the government to collect more revenue at lower rates.

Last updated in the 1980s, there is broad consensus that the tax code needs to be modernized to reflect the realities of today’s global marketplace. Simplifying the country’s byzantine tax code, eliminating special breaks in favor of lower rates, and updating the international tax system can spark economic growth and greater prosperity for all Americans.