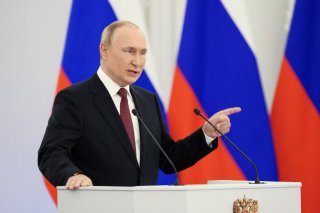 Russian president Vladimir Putin announced the further annexation of Ukrainian territory and laid out a long-term vision of confrontation with the West.

“Referendums were held in the Donetsk and Luhansk People’s Republics, Zaporozhye and Kherson regions. Their results have been tallied, the results are known. People made their choice, a clear choice,” Putin said in a speech given at the Kremlin’s St. George Hall during a ceremony formalizing Russia’s annexation of around 15 percent of Ukraine’s territory. The speech followed five days of voting in referendums denounced by Kyiv and the West as illegal and illegitimate. “And this, of course, is their right, their inalienable right, which is enshrined in the first article of the UN Charter, which explicitly speaks of the principle of equal rights and self-determination of peoples,” he added.

Putin framed the referendums as an act of historical justice, describing the annexed eastern and southern Ukrainian regions—referred to as Novorossiya, or “New Russia,” during the Russian Imperial era—as rightful Russian lands stemming back to “Ancient Russia.”

The Russian leader presented the annexation to Kyiv and the West as a fait accompli. “I want the Kyiv authorities and their real masters in the West to hear me, so that they remember this. People living in Luhansk and Donetsk, Kherson and Zaporozhye are becoming our citizens. Forever,” Putin said, adding that any subsequent negotiations are to be conducted on Moscow’s terms or not at all. “We call on the Kyiv regime to immediately end hostilities, end the war that they unleashed back in 2014 and return to the negotiating table. We are ready for this ... But we will not discuss the choice of the people in Donetsk, Luhansk, Zaporozhye and Kherson. That has been made. Russia will not betray them,” he said. Ukrainian president Volodymyr Zelenskyy insisted in the run-up to the voting that future peace talks will be off the table if Russia proceeds with the referendum scheme. Indeed, Putin’s decision to formalize the annexations makes it exceedingly difficult to envision a viable basis for good-faith bilateral settlement between Moscow and Kyiv.

The Friday address bears crucial significance beyond the annexation plans being pursued by the Kremlin. Putin reaffirmed that Russia will not back down and is prepared for further escalation in its bid to fundamentally revise the post-Soviet liberal international order. “Western elites deny not only national sovereignty and international law. Their hegemony bears a pronounced character of totalitarianism, despotism and apartheid,” he said. “They brazenly divide the world into their vassals, into so-called civilized countries and into all the rest, who, according to the plan of today’s Western racists, should be added to the list of barbarians and savages.” Russia has “never accepted and will never accept such political nationalism and racism,” Putin proclaimed. The speech read in large part as a full-throated denunciation of the Western world, recycling a wide array of historical grievances ranging from the Atlantic slave trade and western “plunder of Africa” to the “genocide of Indian tribes in America,” the atomic bombing of Hiroshima and Nagasaki, and carpet bombings of Vietnam.

The address marks the logical culmination of the nascent anti-Western tendencies outlined in Putin’s 2007 Munich Conference speech. But it also introduced a disturbing new current in Moscow’s messaging: in stark contrast to his prior démarches against the West, Putin did not lay out a path to reconciliation or tease what he considers to be a suitable settlement. Instead, the Russian leader all but proclaimed an existential struggle of civilizations. “All over the world, including in Europe and the United States, as I said, we have many like-minded people, and we feel, we see their support. An anti-colonial liberation movement against unipolar hegemony is already developing in the most diverse countries and societies. Its agency will only grow. It is this force that will determine the future geopolitical reality,” he said. Putin’s rhetoric ironically mirrored that of some U.S. and European policymakers in its moralistic, even manichean overtones: “today we are fighting for a just and free path, first of all for ourselves, for Russia, for diktat, despotism to remain forever in the past … today we need our whole society to consolidate, such cohesion can only be based on sovereignty, freedom, creativity, justice. Our values are humanity, mercy, and compassion.”

There was no ambiguity in Putin’s message: Russia is fighting not just for the delineation of state borders in Ukraine, but to overturn what it sees as an exclusionary and oppressive Western-led world order.

It remains to be seen exactly how this rhetoric will be reflected in concrete policy terms over the coming months, but one thing is clear: Putin’s St. George Hall address marks a dangerous new phase in the Ukraine War. Top Kremlin officials have suggested that they can use any and all means at their disposal, including not just tactical but strategic nuclear weapons, to neutralize threats against the annexed territories. Moscow is now obliged to defend the newly annexed regions as it would its own sovereign territory, setting the stage for continued escalation as the conflict enters its seventh month. In an overlooked part of the speech, Putin blamed suspected acts of sabotage against the Nord Stream pipelines on NATO. “Sanctions are not enough for the Anglo-Saxons, they have switched to sabotage -- unbelievable, but true -- having orchestrated explosions in the international gas pipelines of Nord Stream, which run along the bottom of the Baltic Sea, they have actually begun to destroy the pan-European energy infrastructure. It is clear to everyone who benefits from this. He who benefits from it is the one who did it,” Putin said. It remains unclear if the Kremlin will choose to act on this belief by launching what it would see as retaliatory strikes against critical Western infrastructure. NATO secretary general Jens Stoltenberg said on Thursday such attacks would be met with a “united and determined response,” reigniting fears that the war could spill beyond Ukraine’s borders.

Zelenskyy responded to Putin’s speech with an emergency appeal for expedited NATO membership. Stoltenberg said NATO will continue to support Ukraine when asked about Kyiv’s request in an unscheduled press conference on Friday but dithered on the idea of urgently admitting Ukraine to the alliance. “Every democracy in Europe has the right to apply for NATO membership and NATO allies respect that right and we have stated again and again that NATO’s door remains open … a decision on membership of course has to be taken by all thirty allies and we take these decisions by consensus. Our focus now is on providing immediate support to Ukraine, to help Ukraine defend itself against the Russian brutal invasion…” he said, adding that Russia’s recent actions represent “the most serious escalation since the start of the war.”