Putin Could Use 'Anticorruption' Protests to His Advantage 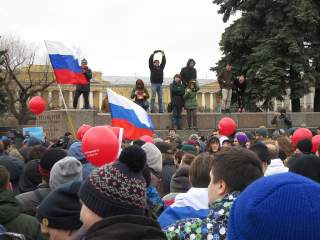 Protest marches were held over the weekend in one hundred cities across the Russian Federation, the largest manifestation of political discontent in the country since dissatisfaction with the announcement that Vladimir Putin would seek a third term as president boiled over into the streets five years ago. Corruption is an especially salient issue in Russia because of the way that the Kremlin has pushed the mantra of the need to sacrifice for the national interest—for the general population to accept the burdens imposed by sanctions and defense spending as a price for maintaining Russia’s status in the world. When the Russian political and business elite makes it clear that they aren’t planning to adopt a more austere lifestyle as well, while social benefits are cut, it triggers quite a vociferous response.

Indeed, the recent history of political protest in Russia makes it clear that corruption or pocketbook issues are a far more mobilizing questions for Russians than defending abstract liberal values or supporting regime change. After several years when appeals to nationalist sentiments have helped to tap down popular discontent, the protests of this past weekend are a reminder of the perennial Achilles’ heel that corruption presents to the Kremlin: when the government is seen as ignoring the concerns of ordinary folk. (What may, in turn, have greater impact is whether truckers angry about new tolls on Russian highways, measures designed to increase state revenues for new infrastructure projects, will begin to take steps to impede traffic across the country to protest the taxes.)

But it is important to stand back and analyze the situation carefully. It is easy to look at the events of the last several days and to jump to conclusions that the facts do not yet warrant. For some, it would be poetic justice if Vladimir Putin and his government were to be brought down in some sort of revolutionary action, a fitting payback for the man many blame for having deprived Hillary Clinton of her rightful place in the White House. For others, the protests can be used as an excuse not to pursue any sort of negotiations with Russia over Ukraine or Syria since Putin seems to be on the verge of “falling.” But is Russia indeed on the verge of its own color revolution?

While some at the various protests did espouse the slogan of the so-called “nonsystemic opposition” of a “Russia without Putin,” the main focus of the protests was not Putin himself but his more liberal prime minister, Dmitry Medvedev. The impetus for the demonstrations was a new video prepared by the leading anticorruption activist Alexei Navalny, which sets out the case that Medvedev has used a series of bogus charitable organizations to allow oligarchs to funnel bribes for his personal benefit. Navalny himself framed this weekend’s actions not as an anti-Putin protest, or to call for regime change, but instead to target high-level corruption within the government.

The involvement of Russia’s next generation—those born in the late 1990s and the 2000s—is of course worrying to the political leadership. But whether this marks a sustainable growth in political activism, or represents frustration and venting but not a commitment to seek systemic political change, is too early to determine. Whether the upwardly mobile late-twenties/early-thirties generation joins in this effort or not is also an important bellwether, because it is their attitudes as to whether the current system can accommodate their aspirations or not that determines whether there will be a viable opposition. Similarly, the geographic reach of the protests—into towns and regions of Russia that did not participate during the 2011–12 protests—is significant, but the overall number of protesters still remains quite small.

And while the protests may seem to be directed against the Kremlin, the anticorruption sentiment that is motivating the demonstrators can just as easily be co-opted by the Kremlin. In the run-up to the 2018 election, we are likely to see younger cadres advanced to more senior positions within the Russian government, while corruption charges are always a useful tool to remove recalcitrant officials who refuse to retire or who have failed to deliver for Putin. Under a slogan of renewal, the energy of the protests can be harnessed to support the advancement of a new generation of patriotic technocrats.

After all, the timing of the protests comes at a time when the different political clans within the Kremlin have begun to accelerate their jockeying for position. And thus the specific charges—about oligarch collusion with an economically liberal prime minister who is also the chair of the ruling United Russia party—have political as well as legal ramifications. Medvedev may be an easier target for the protesters, but he is now being sniped at by others within the establishment who would be happy to see him demoted from the prime ministership or to having the party chairmanship in other hands. Thus, any revolution may be directed less against Putin and instead be the instigating factor for a major reshuffle in the Russian political establishment—conducted under Putin’s supervision.