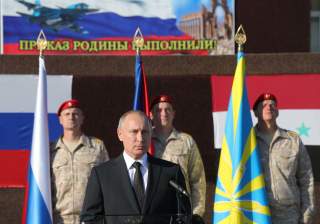 Vladimir Putin had his own “Mission Accomplished” moment for Syria. In a surprise visit to Hmeimim Air Base in Latakia Province, the Russian president declared that the two-year mission of “assistance” had enabled the Syrian regime of Bashar al-Assad to stabilize itself and regain control of a good portion of the country’s territory. A significant—but unspecified—number of the Russian expeditionary forces can now return home, having accomplished their purpose and enterprise.

The location where Putin chose to deliver his remarks was quite significant. Hmeimim is now a Russian facility, which, along with the upgraded naval base at Tartus, marks the restoration of Russia’s strategic reach in the Middle East. It may soon be joined with other facilities in Egypt and Libya, depending on the success Russian diplomats will have in obtaining access rights in those countries.

The style and tone of Putin’s address was also meant to convey a message to the broader Middle East. Like U.S. presidents, Putin chose the backdrop of a military facility to convey his statement—and one cannot help but draw comparisons with similar remarks by Presidents George W. Bush and Barack Obama. But the subtext of Putin’s message was that where the United States had overreached (as in Iraq in 2003) or hesitated to act (as in Syria in 2013) Russia succeeded in undertaking a limited, defined mission—and seems to have succeeded at it, despite all the predictions that Russia was about to repeat its ill-fated Afghan experience. A judicious, focused use of power appears to have turned the tide, not only in saving Assad from falling but in restoring his control over most of Syria. Moscow can say, with some accuracy, that Russia honors its commitments, fulfills its promises and defends its friends.

The real question, of course, is whether Putin’s remarks will be followed by any sort of substantial Russian withdrawal. Putin needs to wrap up the Syria intervention and to claim a victory in a “short victorious war”—the antidote that a czarist minister of the interior, Vyacheslav von Plehve, said a century ago was the only effective way to cope with possible unrest at home. “Mission Accomplished” helps set the stage for Putin’s fourth campaign for the Russian presidency—by showcasing both strength abroad but also projecting a willingness to tackle domestic challenges. In more practical terms, it also helps to pivot forces back to the Eurasian core should they be needed in Ukraine, or another contingency operation.

To some extent, it should be possible to withdraw some “regular” military units, especially given the Russian reliance on private military companies to provide more politically acceptable manpower for continuing operations in Syria—so while some forces may be withdrawn, others can be surged in to replace them. Beyond that, Russia, having defined its mission as saving Assad from falling, is less invested in making Assad a success. To paraphrase John Adams, Putin means to keep his hand under Assad’s chin to keep him from drowning, but not necessarily to lift his head out of the water. Russian diplomacy is playing a complicated balancing game in the Middle East: preserving its relationships with Syria and Iran, but also cultivating Israel and Saudi Arabia, and securing the all-important new strategic partnership with Turkey. Preventing Assad from falling was important to demonstrate that Russia would enforce its red lines—but Moscow is not committed to fulfilling all of Assad’s and Iran’s maximalist goals. A too-strong Assad may be less willing to make key concessions that the Saudis and the Turks, among others, will request. Putin’s remarks are a signal that Moscow does not plan to offer unlimited support to Assad.

Defining victory is a critical part of any country’s narrative. The problem the United States has faced is that the iconic images of Saddam Hussein being pulled out of a spider hole near Tikrit, or Osama bin Laden being taken down in a dramatic raid in Pakistan, are not perceived, at home or abroad, as the definitive images of the Iraqi and Afghan wars. Putin’s December announcement is meant to “fix” the image of Russian success—and to create distance from that achievement, should Syria begin to unravel in the months ahead.