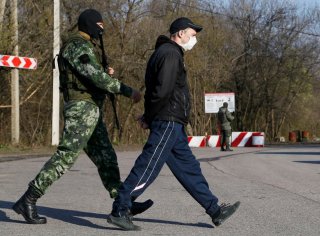 Two controversial prisoner swap agreements have cast a renewed spotlight on the emerging divide between the Kremlin and a diverse coalition of Russian nationalists expressing dissatisfaction with Moscow’s wartime policies.

Ten international prisoners of war (POWs), including several British nationals faced with execution, were released this week as part of a prisoner swap deal brokered by Saudi Arabia. “The [Saudi] Ministry of Foreign Affairs expresses the gratitude and appreciation of the Government of the Kingdom of Saudi Arabia to the Russian Federation and to Ukraine for their response to the efforts made by the Crown Prince [Mohammad bin Salman Al Saud] for the release of the POW’s,” read a statement issued by the Saudi Embassy in Washington, DC.

British citizens Sean Pinner and Aiden Aslin, along with Moroccan national Saadoun Brahim, were sentenced to death in the eastern Ukrainian region of Donetsk in June by a court of the pro-Russian breakaway Donetsk People’s Republic (DPR). The Kremlin talked tough when first asked about the sentences. “The British side’s attempts over a long period of time to distort the state of affairs on the ground led to the fact that some British citizens had a false feeling that earning money from bloodshed in Ukraine would not have any consequences for them. As recent events show, there are consequences, and it is dangerous to be under such delusions,” said Russian Foreign Ministry spokeswoman Maria Zakharova. Kremlin spokesman Dmitry Peskov insisted at the time that Moscow cannot intervene in the justice system of the DPR, recognized by Russia as a sovereign state on the eve of its invasion of Ukraine.

Russian president Vladimir Putin spoke to Saudi crown prince Mohammed bin Salman over the phone about the swap. The two leaders expressed “satisfaction in connection with the transfer to Saudi Arabia of foreign citizen prisoners of war ... that took place with the personal mediation of the crown prince,” according to a Kremlin readout issued on Friday.

It was announced in the same week that Moscow and Kyiv struck a surprise deal on Wednesday for the return of 215 Ukrainian POWs, including over 100 members of the ultranationalist Azov Regiment. The deal, reached with extensive Turkish involvement, swaps the Ukrainian servicemen for Viktor Medvedchuk—a Ukrainian opposition politician accused by his critics of harboring pro-Kremlin attitudes—and fifty-five Russian POWs.

Kremlin officials rejected this very proposal when it was first made by Ukrainian president Volodymyr Zelenskyy in April. “As for the [prisoner] swap that is being discussed so passionately by various Ukrainian officials—Medvedchuk is not a Russian citizen. He has no connection with the special military operation [in Ukraine]. He is a foreign politician,” Peskov told reporters. Moscow did not clarify exactly what prompted its sudden reversal, which did not go unnoticed by hawkish Russian commentators.

Igor Girkin, a former Russian intelligence officer and DPR military leader during the Donbass conflict of 2014, wrote that the timing of the swap was “worse than a crime and worse than a mistake,” calling it “incredible stupidity.” Girkin, who predicted many of the setbacks faced by the Russian military in Ukraine over the past half year, has emerged as a fierce nationalist critic of what he describes as the Kremlin’s ineffectual wartime leadership. Yet even the Kremlin’s close allies have voiced concerns over the swap. Chechen leader Ramzan Kadyrov wrote on Telegram that he was “extremely unhappy” over the deal, adding that “criminals recognized as terrorists cannot be exchanged for servicemen.” Kadyrov was referencing an August decision by the Russian Supreme Court to recognize the Azov Regiment as a terrorist organization. Russia’s criminal code threatens organizers and participants of groups falling under this designation with prison sentences ranging from ten years to life imprisonment. “The transfer of even one of these Azov terrorists should have been unacceptable, Kadyrov wrote.

Vladimir Putin set forth two goals when he first announced the Ukraine invasion on February 24: the “demilitarization and denazification” of the country. The Azov Regiment has long been the face of what the Kremlin and its allies called “Ukrainian Nazism.” The surrender of Azov troops and leaders to Russian forces in May following a months-long siege at Mariupol’s Azovstal metallurgical plant was accompanied by calls and apparent plans for them to be tried in an “international tribunal.” Though Russia lacks the legal mechanism to impose death sentences, there was widespread speculation that the Azov fighters would be tried and executed on DPR-held territory. “It is clear that an exchange would be declared by the collective west as a Ukrainian victory,” said Russian politician Anatoly Wasserman, who introduced a bill in May that would have made it illegal to exchange Azov Regiment members for Russian POWs. Speaker of the State Duma Vyacheslav Volodin endorsed the bill at the time. “You are right to make the proposal, Nazi criminals should not be exchanged. These are war criminals, we must do everything to bring them to justice,” he said.

A number of Kremlin-connected elites defended the exchange after the fact. “What’s more important? The joy of saving your own or satisfaction from your enemy’s suffering? For me, the former,” Margarita Simonyan, editor-in-chief of Russian state media outlet RT, wrote on Telegram. “Our guys over there [in Ukrainian captivity] have only one hope—for an exchange. There are no other options.”

This is not the first time a subset of vocal nationalists openly opposed the Kremlin’s handling of the war. News in March that Ukrainian and Russian negotiators were close to a reaching peace settlement—albeit one that sacrifices nearly all of Russia’s major war aims—prompted shock and outrage among many commentators and some politicians.

But there remains no indication of a looming nationalist split among elites in Moscow. The Kremlin has so far been able to consolidate support among a wide coalition of self-described patriotic Russians committed to a program of neo-imperial restoration and continued confrontation with the West. Polls taken since February 24 show that a majority of Russians continue to support Putin as well as the actions of Russia’s armed forces in Ukraine. Tens of thousands of people gathered at rallies in Moscow and other Russian major cities on Friday to show support for planned referendums that would make the Donetsk and Luhansk People’s Republics, Kherson, and Zaporizhzhia in southern and eastern Ukraine a part of Russia—a potent reminder of the nationalist consensus successfully cultivated by the Kremlin in the months following the war.