Putin Goes on the Offensive (And It's Not in Syria) 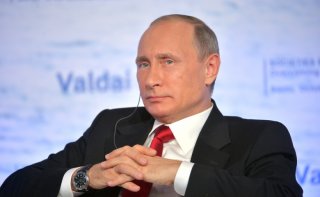 A decade ago, the focus of the Valdai Discussion Club, in the post-9/11 honeymoon that characterized U.S.-Russia relations, was to improve the quality of dialogue between Washington and Moscow. As relations between the two countries have soured, the Valdai group has widened its target audience, increasingly bringing not only more Europeans but civil society representatives of the rising powers of the south and east, especially from China, India and Brazil. So too has the audience shifted for the remarks delivered to the forum by senior Russian officials—including Vladimir Putin.

Indeed, this year’s Valdai offers a prime example of the change in tone. No longer is the emphasis on deepening and solidifying a U.S.-Russia partnership and overcoming remaining Cold War-era hangups that precluded a closer relationship. Now, the Kremlin wants to make its case to the larger world why resisting American dominance of the international system is justified. No longer is Russia seeking to win over American hearts and minds; it is a more global audience that Moscow is trying to reach and convince that Washington under the Obama administration—and most likely under any conceivable successor president—is unreliable and untrustworthy. (A related message is that Washington is also unsuccessful in its efforts; Putin’s chief of staff Sergei Ivanov, in related remarks, declared that U.S. efforts to isolate Russia have been a failure.)

President Putin’s 2015 remarks to the Valdai assemblage mark his most dramatic break with any lingering sentiment that partnership with the United States is still possible, feasible, or even desirable. Even more than his famed 2007 speech to the Munich Security Conference, with his complaints about Washington’s foreign policy, the current remarks in Sochi make it clear that the hope for reviving the immediate post-9/11 antiterrorism coalition and that this might serve as a basis for improving U.S.-Russian relations have no grounding in reality.

- Articulating points that the United States ginned up a largely imaginary Iranian nuclear threat to justify its moves in the Middle East and the deployment of a theater anti-ballistic missile system in Europe;

- That the U.S. is prepared to support terrorist organizations in the Middle East if they can be used as battering rams against regimes Washington dislikes;

- That the Obama administration is forcing its European “vassals” to act against their own best interests by forcing them to impose sanctions on Russia;

- That the U.S. is standing in the way of a settlement in Ukraine and is trying to foment a coup in Russia itself.

None of the above suggests that any of the proposals discussed for advancing the U.S.-Russia relationship will have any traction. It is not clear moving forward what would be an agenda for improving U.S.-Russian relations, and it seems unlikely, at this point, that the Obama team is prepared to accept the Russian perspective on Syria (that one is either on Bashar al-Assad’s side or on the side of the terrorists) or is going to suspend missile defense plans, given that they are one of the few tangible forms of American security reassurance to jittery East European partners who are otherwise unsettled by the steady withdrawal of U.S. forces from the European theater. Coming only weeks after Putin’s face-to-face meeting with Barack Obama in New York as well as talk that cooperating to make the Iran agreement work might lead to more congenial efforts to resolve the crises in Syria and Ukraine, Putin’s remarks in Sochi threw cold water on any hints that there could be any sort of reset of the reset in 2016.

Americans attending Valdai may go home demoralized or depressed about the immediate future of U.S.-Russia relations, but Putin hopes that the Europeans, Chinese, Middle Easterners and others in attendance will gravitate to his message that the United States is untrustworthy and unreliable. Whether that narrative will gain any traction is something that bears close watching.