Putin Has Crossed the Rubicon With Annexation 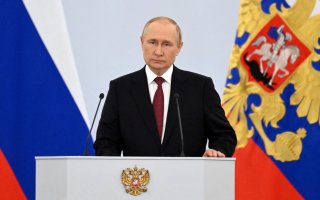 The annexation of occupied Ukrainian territory is an ominous development in the Russo-Ukrainian War. Russian officials have made clear that the territories of Donetsk, Luhansk, Kherson, and Zaporizhzhia are sovereign regions of the Russian Federation and protected by its nuclear deterrent. Ukrainian president Volodymyr Zelenskyy condemned the Russian referendums, pointedly stating that “annex[ing] the territory of Ukraine will mean that there is nothing to talk about with this president of Russia.” President Joe Biden and other Western leaders have rightly slammed Russia’s actions as illegitimate. For all intents and purposes, Russian president Vladimir Putin’s latest move has made it impossible to negotiate a compromise political settlement with Kyiv to end the war.

The rationale behind Moscow’s move to annex these regions, which amount to about 15 percent of Ukrainian territory, is two-fold. First, Russia is primarily trying to deter the United States and its allies from increasing its support for Ukraine’s ongoing counteroffensive. Russia endured a series of embarrassing defeats in the northern Kharkiv region but has managed to slow down Ukrainian forces advancing on Kherson. Putin’s mobilization order earlier this month was part of an effort to consolidate Ukrainian territory under Russian control and reinforce the lines of contact heading into the winter. Unlike in Kharkiv, where Ukrainian forces quickly routed the few lightly equipped Russian units stationed there, it will be more difficult for Kyiv to overcome entrenched Russian positions in the Donbass and Kherson. Moscow is betting that the United States and its allies will not want to risk nuclear escalation and tell Kyiv to make do with the current level of capabilities they are providing.

The second reason Russia is pursuing annexation is that it will allow Putin to claim that he has “won” something in Ukraine. This will appease domestic audiences but it will also prevent Moscow from handing back territory to Kyiv during any future negotiations. Putin believes that Russian forces can exhaust the Ukrainian military over the next few months and force Kyiv to sue for peace at any cost, which will include acquiescing in the forced annexation of its territory.

Paradoxically, mobilization could help Russia manage escalation in Ukraine by preventing future rapid defeats. However, this might not dissuade U.S. policymakers from increasing support for Ukraine in response, such as by providing more advanced capabilities that could offset the influx of Russian forces. A ramp-up on both sides will invariably accelerate the escalatory spiral already underway between the West and Russia.

Ukraine will not simply meet Russia’s demands and quit fighting so long as the United States and its allies continue to provide immense amounts of military aid. Russia has failed to deter Washington from executing its proxy war in Ukraine. Indeed, since Putin’s latest nuclear threat, Biden administration officials have stated that they privately detailed to Russia that there would be “catastrophic consequences” if it used nuclear weapons in Ukraine. In other words, a Russian nuclear strike in Ukraine would invite U.S. retaliation. What happens after that is anyone’s guess but a tit-for-tat exchange between the United States and Russia could easily spiral out of control into something much worse.

After annexation, there is no conceivable political formula that could address the security concerns of both sides to end the war. Putin will not voluntarily relinquish control over the four annexed regions, which are now “officially” part of Russia, and Kyiv will not stop fighting to recapture its sovereign territory. We are now in uncharted waters and what lies around the corner could be more dangerous than anything the world has seen so far in Ukraine.