The Putin-Trump Summit: In Helsinki, Three Worldviews Will Clash 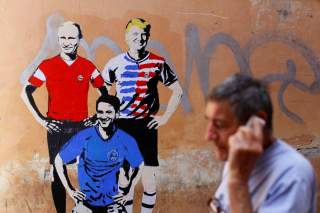 The upcoming meeting between President Donald Trump and Russian president Vladimir Putin in Helsinki has generated a storm of warnings about the possible collusion between two presidents intent on crushing the existing international system, on the one hand, and the rest of the international community—the collective West first and foremost—that built that system and is trying to preserve it.

U.S.-Russian relations during President Barack Obama’s tenure developed as conflict between the two latter worldviews. Common misidentification Putin as a Realist makes them concerned about possible collusion with Donald Trump, but, in fact, any cooperation between them can only be temporary and tactical. There is no doubt that they can achieve limited progress, but only because U.S.-Russian relations today are at an unprecedentedly low point.

Donald Trump and his supporters pay primary attention to power. They see that balance of power has been shifting away from the United States. They also see that the institutions, which were created under the leadership the United States during the Cold War, do not benefit the United States in the same way because it simply does not have the necessary resources. They employ classic Realist prescriptions—shift the burden to other players (demand that European allies significantly increased defense spending), redraw trading rules to better support U.S. economy (the end result should probably benefit primarily traditional industries and the associated middle class, which is gradually disappearing), and generally gain greater freedom of hands in pursuit of U.S. national interests. When existing institutions stand in the way of these policies, these institutions are smashed.

Trump’s view of Russia is very much consistent with Realist prescriptions. He apparently treats it as just another pretty influential power, which should be maneuvered to its proper place on the international arena—first and foremost, to the U.S. side in an emerging conflict with the true competitor, China, as well as in support of policies aimed at dismantling liberal international institutions, which, in his view, no longer benefit the United States. On this global chessboard, the ongoing conflict with Russia is seen as detracting from the already limited U.S. resources and, moreover, is waged over international norms for which Realists have little use. Viewed from that perspective, for example, the issue of the status of Crimea is, indeed, of secondary, if not tertiary, importance.

Donald Trump administration’s policy toward the European Union and NATO are essentially Realist in the sense that he finds it more expedient to deal with each ally individually, rewarding or punishing each depending on its policies—in that format, the United States clearly holds all the cards. It can also find ad hoc allies for these policies—for example, Poland and Baltic states appear to value U.S. security guarantees more than collective NATO guarantees.

These policies have two major drawbacks. The most obvious one is that their pursuit is inefficient and will likely hurt U.S. role and power even more than continuation of previous policies. Unrestricted trade wars and hasty deals, lack of serious calculation of consequences, inept tactics and style—all of them have the potential of accelerating decline of U.S. influence.

More serious is the lack of understanding that, on balance, a developed network of international institutions benefits the United States much more than a classic Realist power game. Costs of such behavior are at least as great—perhaps even greater—than its potential benefits. Although rules of existing regimes might need to be adjusted and the burden of costs redistributed to better reflect the limited resources United States could commit to common policies, the true source of American influence lies within the existing institutions and close cooperation with allies.

The withdrawal from the JCPOA, which limited the Iranian nuclear program and imposed a strict verification regime on it, is a case in point: it antagonized friends and allies and drew the United States into an unnecessary conflict with Iran, not to mention the deal with a potentially unrestricted Iranian nuclear and missile program in coming years (the chances that JCPOA is able to continue as the United States plans to sanction its other participants, including the closest allies, are small, at best). In that fight with Iran the United States will be virtually alone and will need to commit massive political and economic resources.

Contrary to common perception, Russia values international institutions, but its approach is more traditional than the one practiced by the West. At the most fundamental level, Moscow adheres to the concept of a “concert of great powers”—a framework that was first embodied by the 1814 Congress of Vienna and is built around a consensus of great powers—each can contribute to a decision or veto if finds that decision unsatisfactory. The most recent iteration of that concept is the UN Security Council. The Soviet Union helped shape that arrangement and was its integral part. Since Russia does not have the same power and influence as its predecessor, it is even more committed to traditional international law and institutional structures, which often remain the only available conduit of influence.

Moscow is certainly not averse to changing existing regimes or creating new ones. One example is the UNSC Resolution 1540, which seeks to prevent non-state actors from acquiring WMD and the means of their delivery. That case and a range of others demonstrate that it is not stuck in the past, but insists on a traditional, conservative approach to changes—formal negotiations, ability to veto, high legal status (binding or close to that). It also sticks to narrow interpretation of international law and, especially, jealously guards the principle of national sovereignty. A corollary of these principles is mistrust for informal and ad-hoc regimes.

Given these views, it is hardly surprising that Russian perception of Western policies were two wars launched without authorization of the UN Security Council (and, consequently, in violation of traditional international law)—the 1999 conflict over Kosovo and the 2003 war with Iraq—as well as the reinterpretation of the 2011 UN Security Council resolution on Libya, which allowed use of force.

A more recent and nuanced example that illustrates the Russian approach to international institutions is the conflict over the state-level approach of the IAEA to implementation of nuclear safeguards, whose acute phase took place in 2011–2014. Briefly, in pursuit of more efficient use of limited resources to support expanded responsibilities, the IAEA sought to transition from equal application of safeguards to all countries toward concentrating efforts on potentially problematic countries while reducing its activities in countries with a good track record. For assessment of each country the IAEA intended to utilize a broad range of sources, including open-source data, information supplied by member-states (including intelligence data), outside experts, etc. Although Russia initially supported the state-level approach for budgetary reasons, it subsequently mounted—unexpectedly for most—a major offensive against the IAEA Secretariat along two main lines.

First, it insisted that all states are equal under international law and none should be singled out. It also questioned the right of the Secretariat to decide which states are problematic. Such power, it insisted, belongs exclusively to the Board of Governors, whereas the Secretariat is a purely technical body not qualified to make judgments that have policy implications. Second, it questioned the use of outside data and expertise. Citing the misleading information provided by the United States in the run-up to the 2003 war with Iraq, it said the West could manipulate the IAEA in pursuit of goals that have little or nothing to do with nonproliferation of nuclear weapons. Moscow effectively won that conflict after two rounds of clarifications provided by the IAEA Secretariat, which amounted to assurances that the organization would remain within its original mandate.

A similar conflict unfolded only last week over the mandate of the OPCW. Moscow insisted that giving the OPCW the right to use outside sources and expertise and to assign culpability for use of chemical weapons gave it a political role, which the West could use in pursuit of broader, even unrelated political goals. Russia has already hinted that if the broader mandate is not rescinded or modified at the next regular general conference in November, then it could even leave the Chemical Weapons Convention.

A relatively recent feature of Russian foreign policy is active use of precedents in line with narrow interpretation of international law. Few have noticed that shortly before a referendum in Crimea on switching from Ukraine to Russia, the procedure was changed from to a two-stage one: first declaration of independence, then decision to join Russia. The first stage was shaped in strict accordance with the U.S. legal opinion on independence of Kosovo submitted to the International Court of Justice in 2009. Western countries, which had declared the Kosovo situation an exception that did not constitute a precedent, obviously, pointed at differences in the two situations, but, in the end, precedent is in the eye of the beholder and Russia exploited the difference between substance and the narrow legal interpretation to its advantage.