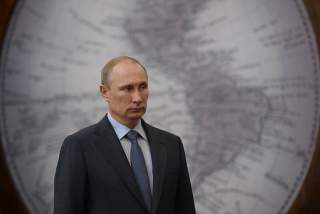 The indelible horror of Malaysian Airlines Flight 17 presents Vladimir Putin and his colleagues with a stark choice—but the United States and its European allies are also presented with a choice. Both sides will make their choices in a changing context where, because of the tragedy, the balance of advantage has shifted. And, to finish this cascade of effects, how this all comes out, more than at any time since the Ukrainian crisis exploded, will depend on decisions made in Moscow.

Putin now has to choose, and he has precious little time to do so. Will he dare to continue as before—calling for a cease-fire and negotiations, while advising and supplying pro-Russian militants who refuse to negotiate? Whether this is a dual strategy designed to strengthen the hand of pro-Russian elements in any negotiation with Kyiv or a double game cynically intended to subvert any possible negotiation and keep Kyiv perpetually off balance doesn’t matter. Whichever it is, his government will be seen by an ever-widening circle of states as the primary barrier to ending an increasingly ugly war in the center of Europe, and the pressure on the Europeans to join the United States in imposing more painful sanctions will mount irresistibly.

Or will he reverse course, end the ambiguity, and do everything necessary to facilitate a peace of sorts, even if it disadvantages the armed militants? That would mean cutting off officially sanctioned military aid to the pro-Russian fighters, doing everything possible to prevent fugitive arms and fighters from crossing into Ukraine, distancing Moscow from the militants, reining in their GRU advisors, tilting toward political figures who have legitimacy in the eyes of a popular majority in the Luhansk and Donetsk provinces, and then strongly urging the east Ukrainians to sit down at the negotiating table.

How Putin chooses will presumably depend on two things: the stakes driving his behavior and the cost-benefit analysis he does. If his primary objective remains shaping Ukraine’s internal and external orientation in a direction tolerable to Russia, the second path seems the more cost-effective. By it, he has the opportunity to salvage power for the eastern regions in a reconstructed Ukrainian political system, protect Russian economic interests in one half of the country, and achieve a de facto guarantee that Ukraine will not anytime soon join NATO. His popularity in Russia would not suffer, because most Russians have little sympathy for the violent hooded figures they see on their television screens and recoil at the thought that they may drag Russia into a far bigger mess. He has already paid the price of turning most Ukrainians into Russia’s most hostile neighbors, and any other choice will simply intensify their loathing. And he stands a chance of deflating the surging pressure among West Europeans to do real harm with sanctions.

If, on the other hand, what Timothy Garten Ash calls his perverse völkisch interpretation of the “responsibility to protect” (Russians abroad) is not a secondary and dispensable objective, but a real and overriding concern; or, if he believes it is feasible and desirable to retain the option of splitting the two eastern regions from Ukraine, then the price he is willing to pay is either much higher or he is calculating that the Europeans will not agree amongst themselves or with the United States to exact it.

If so, he is almost certainly miscalculating, because the second effect of the tragedy is to shift the balance of stakes between the sides. Where before, the Europeans, in particular, allowed their self-interest in avoiding economic warfare to dilute their sense of urgency as the Ukraine crisis deepened and Putin, for all the perils he began to see in violence that could spiral into civil war, seemed readier to stay the course, not the least counting on the Europeans to see the ambiguity in his actions as a basis for their restraint. No longer. As EU officials report, governments are now ready to bear the cost of imposing heavier sanctions, and they will have public support in doing so. At the same time, whatever cushion the element of obscurity gave Putin is gone. Even the positive role he has played in facilitating a proper investigation of MN17’s crash will not restore the readiness of many who before were ready to give him the benefit of the doubt. Proof for them must now come at a higher level: are the Russians working demonstrably to bring the fighting to an end or not?

While Putin’s choice is stark, the West’s choice also has grave implications. The first alternative has one core objective. It makes Putin and the Russians the central focus and concentrates on mobilizing greater diplomatic and economic pressure aimed at forcing them to abandon the armed militants. Were the Russians to resume making trouble for Kyiv by reaching for the energy club, it is likely to acquire a second purpose, but for now it remains trained on Russia’s role in the military conflict in Ukraine’s east and by extension, a deterrent to any further Russian military escalation in Ukraine or elsewhere. Its chief protagonist, the Obama administration, may hope that it will have the secondary benefit of resigning the Russians to a political process leading to an outcome acceptable to Kyiv, but President Obama and his advisors cannot really expect that isolating and punishing Russia will, in fact, produce this effect. As for those who urge a far stiffer response, if they have an objective beyond stymying Russian intervention in eastern Ukraine, it is to inflict the largest possible pain on Russia for the whole catalogue of Putin’s sins and, with a little luck, to bring his regime down.

The other alternative has greater currency in Europe. Its most potent advocate is Angela Merkel, and while she and others are being pulled by events inexorably toward more punitive measures, her central focus is on ending the military conflict and launching negotiations aimed at a broader political settlement. Russia is a key, but scarcely an exclusive, target. Her emphasis is on all—the contact group and Kyiv as well as the separatists and Russia. All are called upon to do their part.

For Kyiv this means much more than President Poroshenko’s fifteen-point plan for peace in the east and much more than his sketch of reforms promising more autonomy to Ukraine’s eastern regions and language protection to Russian speakers. It means accepting that a military solution does not have European support and that Kyiv’s part in a political dialogue must be flexible and genuinely open to meeting the concerns of the majorities in all of Ukraine’s eight eastern provinces. For the contact group, it means more than convening peace talks, even if without preconditions. It means knocking heads to ensure that parties who despise one another and see compromise only on their terms as acceptable are forced to seek common ground. And, in reverse of the usual challenge of getting the Europeans to follow the United States’ tougher approach, it means getting the United States to invest more effort in drawing all parties toward a political settlement.

Nothing, of course, guarantees that, were this second approach given greater priority, Russia would buy into it and shift the focus of its efforts. Listening to the talk in Moscow by those close to the military and more nationalist political elements, the dominant sentiment remains that, whatever he does, Putin will be damned by the West, and meanwhile, even if the military tide has turned against the separatists, in the end, 35,000 Ukrainian troops will not be able to subdue a population of 6 million, if the 6,000 pro-Russian “volunteers” hunker down.

Nor is there any guarantee that, were both sides to select the second of their two choices, they would be able to deliver the other parties needed to wind down the war and move the political process along. In that case, the situation will leave us where we are, constantly teetering on the edge of escalating violence and mounting tensions in Russian-Western relations.

What does seem to be guaranteed is that what Putin chooses to do will determine the other side’s choice. How he will choose—let alone whether he will choose the bolder and more constructive path—only the most casual and injudicious observer would predict. The strewn shards of MH17, however, dictate that choose he must.