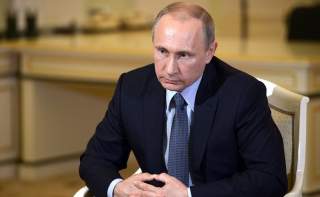 Vladimir Putin's full-throated defense of embattled Fédération Internationale de Football Association (FIFA) president Sepp Blatter, who has seen the organization's top executives arrested in Switzerland on the basis of U.S. anti-corruption warrants issued in the Southern District of New York, should come as no surprise. Throughout his tenure in office, Putin has made it a point to stand by friends of the Kremlin no matter the charges and to demonstrate that the Russian state will do what it can to defend and support them, particularly when they face trouble in the West.

For the last several years, the most visible symbol of that steadfastness has been Syrian leader Bashar al-Assad—whom Putin has refused to abandon or throw under the bus, despite consistent pressure from the United States, and at the expense of concluding lucrative arrangements with the Saudis.

Blatter has defended Russia's winning bid to host the 2018 World Cup—a sporting event of some prestige and, like the Sochi Winter Olympics, part of Putin's strategy of cementing Russia's post-Soviet recovery—even against growing calls from Western sporting executives and politicians, including members of the U.S. Congress, who want the event moved from Russia because of its domestic policies and its actions in Ukraine.

Moreover, after charges that Russia used corrupt means to secure its bid surfaced, Blatter presided over a controversial FIFA exoneration of Moscow's efforts. (Certainly, one thing Moscow—and others—may be worried about is that secret, subrosa FIFA dealings might now be revealed in U.S. courts.) Because he has come through for the Kremlin, defending it in the world of international football, Putin is not prepared to abandon Blatter anymore than he is ready to accede to U.S. demands to facilitate Assad's departure from power.

Putin wants to send a clear signal, as he has for the past fifteen years, that the Kremlin will take care of those who look out for its interests. It was Putin who offered former German chancellor Gerhard Schroeder the appointment to head the Nord Stream pipeline consortium after stepping down from office (and Romano Prodi, after his service as president of the European Commission and prime minister of Italy, was offered the chairmanship of the now-defunct South Stream line—an offer he declined).

In contrast to a United States that seems to abandon loyal servitors once they become problematic or get bad media coverage (and the abandonment of Egypt's Hosni Mubarak still resonates not just in the Middle East, but around the world), Putin seems keen on demonstrating his willingness to stand by his friends.

Putin's bigger aim, however, is to turn the narrative away from corruption in FIFA to one of American overreach. The legal grounds for the arrest warrants of non-Americans working in an international sporting federation that is not domiciled in the United States is that specific actions took place on U.S. soil (meetings and payoffs), involving U.S.-based entities, and—most critically—the use of U.S. financial institutions as part of a scheme of kickbacks and bribes. Putin claims that this is an exercise in extraterritorial jurisdiction—an attempt to apply U.S. law beyond its borders for matters that fundamentally occur outside of recognized American jurisdiction. Putin has also subsumed the FIFA affair into his broader critique of the United States (and other Western countries) attempting to impose their systems and values on the rest of the world.

The first and immediate test will be whether Sepp Blatter is reelected as FIFA president. All 209 football federations cast a single, secret ballot. It will be a test as to whether the Western view of corruption in FIFA prevails, or whether, as Putin seems to suggest, most national federations are comfortable with the Blatter way of doing business and reject Western efforts to dictate what standards are acceptable. This would fit in with Putin's efforts, in recent years, to act as a champion of the "rest" against the West, and particularly Western leadership in global institutions.

A longer-term goal is also to persuade more of the movers and shakers of the rising world to avoid the United States and avoid doing business in any American jurisdiction. In the aftermath of U.S. and European sanctions imposed on Russia because of the Ukraine affair, Moscow has accelerated its efforts to encourage the major non-Western states to begin weaning themselves off the use of the dollar as the de facto world reserve currency and to find ways to conduct international business transactions that route around U.S. and European markets. Moscow's own counterboycotts and blacklists have had little impact to date; it is only if they can acquire critical mass through the participation of others that they might have some impact. What will bear watching is whether the FIFA case is used by the Russians to show how even the tangential use of U.S.-based markets and financial institutions opens up non-American businesses and firms to being liable under U.S. law and thus exposed to U.S. legal action leads to a further shift of global business away from U.S. institutions in favor of more congenial climes.

U.S. officials see the FIFA indictments as an example of American leadership in the fight against worldwide corruption—and expect other countries to be supportive of U.S. efforts. Putin is using it as the latest example of Washington's continued desire to set rules and arbitrate good behavior for the rest of the world. Which narrative will win more hearts and minds around the world?