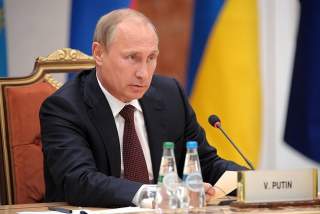 The initial optimism that the first face-to-face meeting between the presidents of Russia and Ukraine last week in Minsk represented the long-awaited start to the de-escalation of Europe’s worst security crisis in a generation was dashed when, contrary to expectations, the fighting in East Ukraine accelerated—and Moscow began to more openly assist the separatist forces. This begs the question: when a very promising off-ramp to defusing tensions presented itself, why would Vladimir Putin seemingly reject it?

Pundits have come up with all sorts of explanations—from irrationality to megalomania to outright duplicity—and the overall impression many are left with is that Putin is hell-bent on war.

Yet one can detect a very clear purpose and design behind Russian actions—particularly in simultaneously starting dialogue and encouraging an increase in the tempo of military operations in southeastern Ukraine, following a template that has already been used vis-à-vis Georgia six years ago. We have a tendency to be puzzled by Russian actions and can attribute it to an inscrutable Kremlin mindset, when, in actuality, Moscow is aligning its strategic compass to a different set of goals.

Going forward, there are three objectives to be obtained—first, to weaken the bargaining position of the Ukrainian government and to move it towards acceptance of Russian proposals; the second, to destroy or degrade its military and economic capabilities, and the third, and perhaps most important, is to discredit Western promises of aid and support and, if possible, induce a feeling of betrayal and abandonment among Ukraine’s leaders.

By agreeing to come to Minsk at all—and accepting the need for trilateral Russia-Ukraine-EU “working groups” to clarify the terms of the association agreement Ukraine signed with the EU and to restart talks on resolving the gas dispute with Russia—actions seen very skeptically by a number of the elements in the Maidan movement—Petro Poroshenko was already opening the bargaining process with Moscow. Yet he traveled to Belarus with several cards in his favor. Against the expectations of many in the Russian government, the European Union had, in the aftermath of the shootdown of MH-17, agreed to much tougher “sectoral” sanctions against Russia, which, while not strong enough to force a change in Russian policy, are nonetheless a growing inconvenience. Moreover, the Ukrainian “anti-terrorist operation” was beginning to wear down separatist resistance and steadily reduce the amount of territory under their control.

While Poroshenko has, in theory, supported the idea of some degree of decentralization in Ukraine (although such reforms now appear to be delayed indefinitely), he was absolutely resistant to the idea of having to open formal talks with the two separatist entities (the Donestk and Lugansk ‘peoples’ republics’) or to grant them any sort of recognition as having standing to represent southeastern Ukraine. Two weeks ago, some were predicting the imminent fall of both Lugansk and Donetsk to Ukrainian government forces. This would have eliminated the need to engage with them as political actors. Part of the Russian approach in recent days has been both to extend new life and vigor to these entities—and, as Kremlin spokesmen and even Putin himself have begun to note—to compel the Poroshenko administration to deal with the separatists as a viable force in Ukrainian politics.

The next round of hurriedly-convened ceasefire talks might aim to make Donetsk and Lugansk “realities” that any government in Kyiv would be forced to deal with. Ukraine would join the last of other former Soviet republics with quasi-permanent “frozen conflicts” that it would be unable to solve without Moscow’s blessing. Even though the West maintains that Ossetia and Abkhazia are part of Georgia, and not the independent states Moscow (and a few other countries) claims they are in the aftermath of the 2008 clash—and while Washington’s position is that the continued Russian military presence in these two enclaves does constitute violations of the 2008 ceasefire accords, the world has apparently learned to live with the current status quo. The same may soon be true of Ukraine.

The resumption of fighting in eastern Ukraine also has other purposes. Ukraine’s military capabilities—never robust, due in part to corruption and underfunding that has left the army much less able to cope with the new threats Ukraine faces—are being further degraded. And while there is much talk, particularly among politicians and pundits for supplying advanced weaponry to Ukraine’s military, the reality of the poor performance of Ukrainian units and very real concerns about corruption in the ranks will make Western military establishments loath to simply hand over stocks of weaponry. The U.S. military, in particularly, cannot point to the effectiveness of its train-and-equip programs after the debacle of a theoretically much better armed and positioned Iraqi military abandoning the fight (and a good deal of expensive U.S. supplied equipment) to the rag-tag forces of the Islamic State.

Western private capital is also not poised to make major new investments in Ukraine either. Royal Dutch Shell—which had signed agreements with the ousted president Viktor Yanukovych to begin developing shale oil and gas deposits in east Ukraine, has now put any such plans on indefinite hold, citing the unstable conditions in the region and the impact of the fighting. Ukraine is set to emerge from this conflict far weaker, in both economic and military terms, than where it was a year ago.

Finally, Putin wants to dash the hopes of the new Ukrainian government in any effective Western intervention on their behalf. After the 2008 Russia-Georgia conflict, former Ukrainian president Leonid Kuchma had advised his compatriots not to be drawn in to any clash with Russia, noting that if Ukraine were to “tilt against Russia … someone will take our side? I’m sure neither [the] EU nor the US won’t lift a finger.” This time around, the West has been prepared to do more in terms of sanctions—although the EU’s efforts have been much more grudgingly imposed—but last week President Barack Obama once again signaled that there were clear limits as to how far the West would go—with military action certainly taken off the table. Poroshenko’s own appeal for immediate EU action to tighten sanctions on Russia was met with a response that the issue would have to be studied—with a final decision postponed until later in September. Putin hopes that by pushing the envelope, he can discredit Western rhetoric and that, in turn, sufficiently chastened Ukrainian leaders will be prepared to make concessions to Russian demands when they realize that no cavalry will be riding to their rescue. In turn, it would further reinforce Russian predominance in the Eurasian space—as other regional leaders would question the value of any vague Western promises versus Putin’s clear willingness to take action to defend his red lines; it would enhance Putin’s popularity at home, by again successfully defying the “diktat” of the West; and his Chinese partners are more than happy to have the apparent hollowness of Western commitments in Eurasia on display as a warning to its own East and South Asian neighbors not to put too much trust in Washington’s promises.

The Russian gamble is that the Kremlin can establish facts on the ground in Ukraine that both the Poroshenko government and the West will reluctantly accept. The Western response, so far, has not changed this calculus; sanctions are a problem but are survivable—especially if they are not sustained for the long term. Putin may be making the biggest miscalculation of his political career, but there is a method to the apparent madness in Ukraine.

Nikolas K. Gvosdev, a contributing editor at The National Interest, is a visiting lecturer in international relations at Brown University.