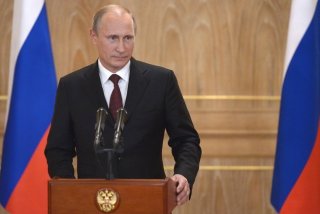 On Friday, in the Black Sea resort city of Sochi, the Valdai Discussion Club met for its annual audience with the president of Russia. As he has done before, Vladimir Putin held forth at length on the current state of international affairs for an assembled group of journalists, academics and government officials representing twenty-five countries.

Putin made a number of comments about U.S.-Russian relations in the course of his three-hour appearance. The New York Times described them as “perhaps his strongest diatribe against the United States yet.” Yet a close look at the text of Mr. Putin’s prepared remarks suggests that this interpretation may not be quite right. It suggests that the address had at least two overarching aims, neither of which are particularly radical departures for the Russian president. The first was to position Russia as the world’s preeminent status quo power. Decrying the long post–Cold War “period of unipolar domination”, Mr. Putin set out, in stark terms, to paint the United States as an irresponsible revisionist hegemon, the sower of the seeds of global anarchy and a practitioner of nothing less than “legal nihilism.”

According to Putin, “there is no guarantee and no certainty that the current system of global and regional security is able to protect us from upheavals,” because at the end of the Cold War, the United States decided to do away with the post–World War balance, opting instead to take steps that “threw the system into sharp and deep imbalance.” Perhaps. Yet his thumbnail sketches of what the United States wrought by its interventions in Libya, Afghanistan, Iraq, Syria and yes, Ukraine, cannot simply be wished away. Whether it is the upsurge of radical militancy in the Middle East that intervention in Libya helped spawn or State Department official Victoria Nuland’s maladroit meddling in Ukraine, Washington does have some culpability for the current global upheaval.

The second aim of his remarks was to position Russia, and by implication, himself, as a good global citizen. Putin, it is true, spent nearly the entirety of his remarks speaking about the West, yet it is clear that one of his intended audiences was the developing, or non-Western, world. According to Mr. Putin, America’s persistent efforts to guarantee its “exceptional position” are “in contradiction with the world’s diversity.”

He went on to assert that “international relations must be based on international law, which itself should rest on moral principles such as justice, equality and truth.” Playing to this image of an exemplary global citizen, he even seemed to back away from a concept often deployed by his critics in trying to explain his foreign policy. According to Putin, a “new global consensus” cannot be shaped through “local deals or a division of spheres of influence in the spirit of classical diplomacy.”

During the course of his remarks, Mr. Putin returned to one of his favored themes—that of the relationship between state sovereignty and global stability; he raised the possibility that “global anarchy” might well be brought on by the “internal instability in separate states.” According to Putin, a fundamental dilemma needs to be addressed: “actions by the international community to ensure security and human rights and the principle of national sovereignty and noninterference in the internal affairs of any state.”

None of this—the criticism of American policy, the calls for a sacrosanct view of state sovereignty—is anything new under the sun. In his book, Putin and the Rise of Russia, the German historian Michael Stuermer gave a brief account of meeting Putin in the Kremlin in 2005. Even back then, Putin’s “messages were unequivocal. Stability is the leitmotif in his thinking. He demands predictability from himself as well as from others.”

Putin further elaborated on this theme in his much-remarked-upon speech to the Munich Security Conference in 2007. It was there where he first sounded many of the criticisms of the United States that have resurfaced this year as relations have taken a nosedive because of the Ukraine crisis: “One state, first and foremost the United States, has overstepped its national borders in every way.”

Yet while neither new, nor particularly shocking, given the circumstances in which Russia now finds itself, Putin’s comments on Friday have provoked a rash of headlines here in the United States. The New York Times alerted readers “Putin Lashes Out at U.S. for Backing ‘Neo-Fascists’ and ‘Islamic Radicals”; the Financial Times proclaimed “Putin Unleashes Fury at US ‘follies’”; and Fox News reported that “Putin Blasts US in Speech, Blaming West for Conflict in Ukraine.”

But did they really expect Putin to attempt to endear himself to his detractors in the West? The United States, at least in Vice President Joseph Biden’s telling, was the prime mover behind the implementation of the sanctions regime now in place against Russia. At his recent (and unfairly criticized) appearance at Harvard, Biden said:

. . . it was America’s leadership and the President of the United States insisting, oft times almost having to embarrass Europe to stand up and take economic hits to impose costs. And the results have been massive capital flight from Russia, a virtual freeze on foreign direct investment, a ruble at an all-time low against the dollar, and the Russian economy teetering on the brink of recession.

Meanwhile, Putin is relentlessly attacked, depending on the ideological proclivities of the given journalist or Hillary Clinton speechwriter, as the second coming of Adolph Hitler or Joseph Stalin. At the very least, he is called a fascist and/or thug in prominent American news outlets on a near-daily basis.

Yet the Obama administration now seems to be coming to realize that America’s support—overt, covert or whatever the case may be—for the Maidan revolution has impinged upon any claims on Russia’s cooperation over matters like counterterrorism that may have a direct bearing upon U.S. national security. So we might do well to think about Mr. Putin’s withering critique and ask whether it should be dismissed or seriously contemplated.