Putin's Power Play: Why Russia Holds Most of the Cards in the Ukraine Crisis 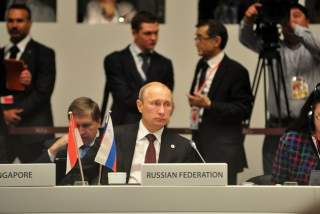 Reports out of Milan regarding last Friday’s much anticipated meeting between Russian president Vladimir Putin and Ukrainian president Petro Poroshenko indicate that little progress has been made toward resolving the nearly yearlong Ukraine crisis. This, given the broader political currents at play in Europe, is unsurprising.

To begin with, Mr. Poroshenko has, for all intents and purposes, lost the military battle over the Donbas in resounding fashion. While his bloc leads in the polls ahead of next Sunday’s parliamentary election, Poroshenko faces a number of other challenges, not least of which is a collapsing economy (some estimates have the Ukrainian economy shrinking by 10 percent this year) and a burgeoning populist backlash over the government’s handling of the crisis.

So what we saw play out in Milan is more or less a repeat of the last Putin/Poroshenko meeting that took place in Minsk on August 26, because the same logic applies. Mr. Putin, as I wrote then, is always going to be the party—regardless of whether he is facing sanctions or a chorus of international condemnation—who will be playing the stronger hand in negotiations with Ukraine. Yet as we approach November, his hand is even stronger, as the crisis begins to transform from a military confrontation between Russia and Ukraine into a confrontation between Ukraine and Europe over the supply of Russian natural gas. Ukraine serves as the transit point for 50 percent of EU-bound Russian LNG, and Ukraine’s siphoning off of LNG bound for southeastern Europe, which led to Russia cutting off the supply in January 2006 and January 2009, is still fresh in the minds of European leaders.

The Rada’s recent passage of a lustration bill, widely publicized acts of violence against sitting MPs through “trash bucket challenges,” a popular revival of Nazi-era symbols and the incorporation of far-right elements into Prime Minister Arseniy Yatsenyuk’s “People’s Front” do not exactly augur well for the chances for a tranquil political environment in either Ukraine or in Eastern Europe, where the memory of Ukrainian collaboration against the Poles and the region’s Jews is fresher there than it is here in the United States.

There are already signs of tension between Ukraine and what had been its most enthusiastic supporter in Europe—Poland. Because of the war in the east, Ukraine, while normally a coal exporter, will by some estimates now need to import between 3-4 million tons of coal as winter approaches. In spite of the war, Ukraine is continuing to import large amounts of Russian coal while Kiev only evinces an interest in Polish coal, according to Poland’s economic minister, when “it is free.” Meanwhile a dispute over Kiev’s ban, ostensibly over health concerns, of Polish meat continues to stoke tension between the two countries. The bilateral relationship also has not been helped by popular demonstrations in Kiev calling for the rehabilitation of the wartime Ukrainian Partisan Army, which took part in the wholesale massacres of many thousands of Poles. The fact that wartime figures like Stepan Bandera elicit popular sympathy in western Ukraine is something that most American pundits studiously avoid mentioning. Here it might be worth recalling a passage from the historian Halik Kochanski’s history of the Poles in the Second World War:

“The Germans also exploited the disloyalty of the Ukrainians towards the Poles by recruiting large numbers into their auxiliary units and into the Roland and Nachtigel battalions. They became the Germans’ most willing assistants and received German uniforms, arms and training before undertaking their main task: the destruction of the Jews…” [Emphasis added]

Also, little noted in the American press is what effect the recent changes in personnel in the Polish prime and foreign ministers’ offices may have on the regional crisis. Last month, Prime Minister Donald Tusk took the top job in the European Union. He was replaced by Ewa Kopacz, who wasted little time in distancing herself from the activist (and frankly, Russophobic) foreign policy of Tusk’s foreign minister, Radek Sikorski. No doubt Sikorski’s views will continue to reach a wide audience here in Washington via his wife’s increasingly imaginative musings in the Washington Post.

A final development that may favor Mr. Putin is the recent change in NATO’s political leadership. The preening former Danish prime minister and Iraq War–enthusiast Anders Fogh Rasmussen has been succeeded by former Norwegian prime minister Jens Stoltenberg. In contrast to Rasmussen (that rarest of species: a Euro-Neocon), the new secretary general has a reputation as a consensus-maker and is reported to be on good terms with Putin who has said of Stoltenberg, "We have very good relations, including personal relations.”

Given all of this, it seems Mr. Putin has little in the way of motive in trying to help resolve the crisis. We should not expect any serious push to resolve the almost yearlong Ukraine crisis until the end of what may prove to be a very cold winter in Eastern Europe, by which time Europe’s political balance may have tilted even further in Mr. Putin’s direction.