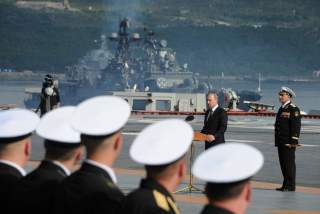 Russian public opinion is far more likely in the near term to shape the behavior of the Kremlin than the new, tough sanctions against Russia—but not in ways that most would expect. To be sure, the great majority of Russians blame America for provoking the current conflict in Ukraine, and anti-American feeling is now at its highest point in the post-Soviet period. Such attitudes are partly the result of a powerful burst of pent-up nationalist grievance—rooted in the trauma of the Soviet collapse and its aftermath, and aggravated by American unilateralism in the post-Soviet era. As for popular support for Vladimir Putin, the crisis has boosted his personal ratings in August to 87 percent (Barack Obama’s are at 40 percent). Yet, counterintuitively, these numbers do not translate into political support for military escalation by the Kremlin. The evidence of numerous recent surveys suggests that a clear majority of Russians are against the intensification of the conflict, a fact that has likely restrained the Kremlin up to now. The Kremlin’s most recent tactic of humanitarian relief could temporarily shore up its weakening position in southeastern Ukraine while aligning with the cautious preferences of most Russians. Yet if the Kremlin still decides to escalate, that decision will likely divide Russian society more deeply than at any other time during Putin’s rule.

Vladimir Putin cannot count on solid public support for open intervention in Ukraine in part because relatively few Russians perceive serious external threats to Russia from the West. According to a recent poll by WCIOM, the Russian public opinion firm, only 18 percent of respondents worried about a military threat from the West. Equally significant, given constant Kremlin warnings about American aggression, only 13 percent of respondents in the same poll felt that Russia should send forces into eastern Ukraine even if NATO intervened in the conflict. Given these sentiments, the capacity of the Russian state to mobilize society for extended military conflict, and its accompanying costs, is fragile. Such an assessment is reinforced by the fact that many Russians believe that if war does breaks out over Ukraine, it will be because pro-Russian separatists in southeastern Ukraine have dragged Russia into the conflict.

The primary source of Putin’s popularity is equally relevant to understanding the Kremlin’s ambivalence about escalation. Putin’s standing in the polls, which had dipped to 62 percent in early 2013, certainly received a boost from the nationalist and patriotic feelings generated by anger with the United States for supporting demonstrations against the government of Viktor Yanukovych and by widespread elation over the subsequent annexation of Crimea. These emotions were fanned by Kremlin-controlled media, particularly television, which is the primary source of news for most Russians, who tend to trust it as an objective source of information.

Yet Russians also approved the annexation of Crimea because it seemed like a low-cost foreign-policy victory that confirmed Russia’s regional power while snubbing American interests. The Kremlin has continued to encourage the belief that while the West is aggressively hostile to Russia, Moscow’s foreign policy remains peaceful and sure-footed. This narrative reflects Putin’s understanding that the lion’s share of his popularity rests not on nationalist fervor, but on perceptions that he has brought economic growth, political stability and international prestige to Russia. Recent polls demonstrate that most Russians, at least for now, are satisfied with domestic socioeconomic conditions but also understand that a widened conflict in Ukraine could jeopardize these gains.

Russia by the (Survey) Numbers

Western observers often characterize Putin’s foreign policy as driven by a desire to annex or otherwise control Russian-speaking lands, including southeastern Ukraine.  Although the evidence supporting this perspective is inconclusive, it is possible to obtain from recent public opinion surveys a good sense of whether Russian society supports such a goal.

In polls conducted by WCIOM in June 2014 on the Crimean crisis, the overwhelming majority (94 percent) of Russians felt that the incorporation of the peninsula into Russia in March of this year was legal, irreversible, and desirable. Yet these same surveys confirm that antagonistic, expansionist nationalism in Russia is far from fever-pitch. Although Kremlin-controlled media had used an emotional brew of ethnic nationalism to justify annexation—particularly the supposed need to protect Russian-speakers from the new government in Kiev—only 10 percent of survey respondents agreed with this position. Instead, participants identified freedom from paying rent to Ukraine for Russian naval bases as the main reason to support their government’s action (35 percent), followed by the acquisition of a valuable tourist region (33 percent). Reflecting disinterest in a neoimperialist agenda, only 7 percent of respondents cited the “expansion of [Russian] territory” as a reason for absorbing Crimea.. Just 2 percent believed the annexation would increase the authority of the Russian state, while under 1 percent thought it would enhance its geopolitical position, both crucial aspirations of extreme Russian nationalists and Kremlin hardliners.

Russian attitudes about the conflict in southeastern Ukraine are similarly complex. Close to 80 percent of respondents in a July poll thought the “militiamen” were defending the rights of Russian-speakers. Most respondents also believed that the rebels are overwhelmingly Ukrainian. Less than 20 percent agreed that Russian citizens, whether as freelance fighters or under the control of the Kremlin, were involved in the conflict. 79 percent of respondents believed, erroneously, that the majority of the residents of southeastern Ukraine strongly support the actions of the rebels, who advocate the secession of the Donbass. Not surprisingly, 88 percent of participants thought the interests of Russian speakers in Ukraine were “definitely” or “probably” threatened by the government in Kiev. Yet, keeping in mind that most Russians do not accept that the Kremlin is stoking a proxy war, 70 percent of survey participants felt that Putin was already doing “everything possible for the resident of southeastern Ukraine in light of Russia’s interests.” Other polls demonstrate that most Russians do not support the annexation of the region, even though the leaders of the pro-Russia separatists in Luhansk and Donetsk appealed to Russia for incorporation after referenda on secession in May. In a survey administered in early August 2014, an absolute majority of Russians believed the Russian leadership should not privilege foreign-policy goals, including “interference” in Ukraine, over attention to “Russia’s social and economic problems.”

Among Russians who felt the separatists should receive aid from Moscow, the vast majority favored humanitarian, diplomatic or economic relief. 12 percent of respondents supported the provision of weapons and technical support to the rebels while only 5 percent advocated the entry of Russian troops into the Donbass region. In another poll administered at approximately the same time but with somewhat different wording, only 9 percent of respondents felt that Russia should “definitely” intervene in southeastern Ukraine.

Participants in surveys were also asked what might be the primary reason for Russia’s military intervention in Ukraine. 29 percent cited the killing of “brotherly peoples,” a percentage that may increase as the number of civilian deaths and refugees mount in the Donbass conflict. In a rebuff to Russian hardliners, only 2 percent believed that Russia should intervene to defend its interests against the USA even though 52 percent of Russians in an August survey felt Ukraine was now an American “puppet” pursuing anti-Russian policies. Despite popular hostility to the new authorities in Kiev, only 1 percent in another survey felt that Russia should not permit the “seizure of power by Nazis” in Kiev. Kremlin-controlled media has condemned the Ukrainian government as a neofascist entity installed by an American-engineered “putsch” that threatens not only Russian-speakers in southeastern Ukraine, but Russia itself. Significantly, 54 percent of the respondents were unable to select a reason that would justify intervention.

With low popular support for escalation, Putin faces a sharpening dilemma. The recent success of the Ukrainian army against the secessionists is due in large part to Russia’s halting posture over past months, as well as the support of a clear majority of the population of eastern Ukraine for a unified state (but not for the government in Kiev)—factors which have surprised and embittered the rebels. Overt Russian intervention may now be the only way to forestall the collapse of the insurgency. Its defeat would cripple, at least for some time, the Kremlin’s goal of maintaining influence over Ukraine’s domestic and foreign policy in the face of Kiev’s turn to the West.

Yet if the Kremlin intervenes with ground forces, it cannot expect strong domestic support. A recent survey by the Levada Center, released on July 29, asked respondents what did they fear would be the result of fighting involving Russian volunteers in southeastern Ukraine. 66 percent predicted significant or at least some danger that Russia would be drawn into war with Ukraine. 52 percent saw a high or moderate threat of a “third world war.”

The survey also found that only 55 percent of respondents would “definitely” or “probably” support the Russian government if war broke out with Ukraine. In March, the level of such support was 74 percent. Significantly, the number of respondents who would “definitely” support the Kremlin dropped to 17 percent in July from 36 percent in March, suggesting a deepening fear in Russian society of a Ukrainian quagmire. While Russian patriotism and anti-Americanism have risen significantly since the Maidan revolution in Kiev and Russia’s incorporation of Crimea, militant Russian nationalism is not the primary force shaping Russian public opinion regarding foreign policy —and would be difficult to generate if the Kremlin chooses escalation in southeastern Ukraine.  Yet it is equally true that nationalism has strengthened intolerance for dissent in domestic politics at both the elite and popular level.