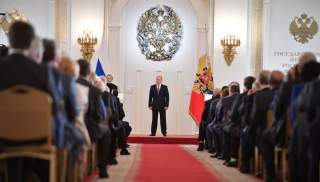 American strategists have good reason to be confounded with Russian President Vladimir Putin. Somehow, operating on a defense budget that is approximately 10 percent of that of the United States’, he has managed to make Russia matter a great deal in world affairs. There is a genuine threat that Moscow is outpacing the United States in advanced military and nuclear strike technologies, and that Russia has the military means to have its way both in the Arctic as well as in Eastern Europe. Meanwhile, there is the odd reality that Putin’s opinions on various Middle East crises seem to matter more than those of the U.S. President. Never mind that major American partners, from Japan to South Korea to Israel to India seem completely unwilling to follow Washington’s lead into a new Cold War with Moscow. Last but not least, there is the Russia-China partnership that seems to be developing solid momentum as demonstrated by Putin’s June 2018 visit to China.

Yet all is not well in Russia, of course. Tragedies, such as the horrible Kemerovo fire or the tragic plane crash at Domodedova, remain unfortunately an all too common occurrence, and there is the related frustration that the economy still seems to be stagnant, even as rising oil prices show some promise to provide a bump. Looking at video of the gleaming new Kerch Bridge that connects to Crimea, many Russians are apt to ask when, if ever, a major infrastructure project of this scale will actually come to fruition in their corner of the immense country. Western critics, to be sure, are quick to blame Russia’s habituated affection for authoritarian politics and corrupt capitalism for the country’s ills, but they may yet miss certain positive signs of a still reasonably vibrant political debate inside Russia itself. As an illustrative example, a rather spicy Russian-language article—bordering on the farcical—recently appeared on the website of the reliably conservative Military Review [Военное Обозрение] under the bizarre, yet titillating headline: “The American Agent Putin” [Американский агент Путин].

The author explains that in “patriotic circles” in Russia today, one hears that Putin is a “real agent of the West and everything that he does in one way or another serves the interests of Western governments [настоящий агент Запада. И всё, что он делает, так или иначе делается в интересах западных государств].” The author notes that critiques of Putin are quite standard from liberals, but are more interesting coming from the right. Putin is, the author charges, the “heir to Yeltsin, and he stashes his money in the West [наследник Ельцина, и деньги хранит на Западе].” The current Russian president is accused of compromising on the issue of the Donbass (eastern Ukraine), and the author says Putin also closes his eyes to rampant corruption. Then, the author explains that “for almost 15 years, Putin has called the Americans as ‘partners,’ but for us they are not only not partners, but now as it turns out, they are the most real enemies [почти 15 лет называл американцев ‘партнёрами,’ а они нам не только не партнёры, но и, как теперь выяснилось, самые настоящие враги].”

Noting the “huge volume of incoming information and their assessments [в огромном объёме поступающей информации и своих оценках]” that is evidently the hallmark of the internet age even in Russia, it is moreover noted that Russia has its share of conspiracy theorists and paranoids. “The most gifted conspiratorial citizens even reach the direct accusation that Putin is working for American intelligence, or for Israeli intelligence.” [Наиболее конспирологически одаренные граждане и вовсе доходят до прямых обвинений Путина в работе на американскую разведку. Или на израильскую].

Still, the article is not quite as radical as it may seem at first glance, and it seems the author is actually more in tune with conventional Russian opinions—especially those coming from the national security apparatus. Turning to Putin’s foreign policies, he describes the 2008 decision to use force in Georgia in some detail. It is concluded that Moscow could have rather easily let Georgia’s actions against South Ossetia go unanswered, but that the decision to use force “showed us, maybe for the first time, the real Putin [показало нам, может быть, впервые, настоящего Путина].” The author gives the Russian President credit for thus “freezing NATO ambitions in Georgia” and proclaims that such moves were “anti-American, Anti-European, and anti-democratic” and thus illustrate that Putin actually is no “agent of the West.”

On Syria, this author likewise seems to think Putin has maneuvered adroitly. He explains: “I have heard repeatedly that the Americans lured us into the Syrian trap. Well, fine, we were lured. And when will they close it? While it is not closed yet, we are looking quite good in this trap. [Я неоднократно слышал о том, что американцы заманили нас в сирийскую ловушку. Ну хорошо, хорошо, заманили. А захлопнут они её когда? А пока не захлопнули, мы в этой ловушке довольно неплохо выглядим.].” He contends that the price of oil is rising and that the Saudis have finally come as guests to visit the “American agent Putin.” Similarly, the author discusses the allegation that the Crimean annexation was also a “trap” that Russia has fallen into. Yet, here, it is explained that Russia has seemingly “got the cheese from it and safely eaten it [сыр из неё был нами благополучно съеден.].” The Kremlin’s Ukraine policies are viewed as successful since they will keep Ukraine from NATO’s grasp for “decades.”

In the conclusion, however, this author returns to the original theme, suggesting that foreign policy successes cannot excuse domestic political failures, because “Our president, undoubtedly, can make mistakes [Наш президент, безусловно, может ошибаться].” He states that Putin deserves criticism for both the weak economy and also the failure to battle corruption and organized crime. Some will be apt to dismiss this article as a kind of “puff piece” in disguise with a “click-bait” headline to boot. Fair enough, but this is far from the only critique of Kremlin policies that one can find in the Russian-language press these days and it is significant to note that such critiques are also coming from the right (as well as the left) in contemporary Russia. The claim that Russia’s polity is “totalitarian” has already been largely discredited, but it has long been apparent that many in the West have strong opinions about the Russian press without any serious understanding of its actual content.

Lyle J. Goldstein is Professor of Strategy in the China Maritime Studies Institute (CMSI) at the United States Naval War College in Newport RI. You can reach him at [email protected]. The opinions in his columns are entirely his own and do not reflect the official assessments of the U.S. Navy or any other agency of the U.S. Government.