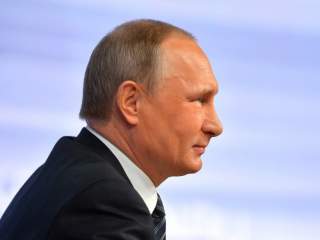 President Vladimir Putin engaged in his traditional end-of-year marathon press conference this week with some 1,300 journalists attending in Moscow. As is his wont, Putin used the event to reassure Russians that despite the hardships of the last year, the economy has turned a corner, pensioners will be taken care of, subsidies will be made available to Russian farmers and low-income families will be shielded from the continuing rise in utility costs. It is part of his effort to renew Russia's traditional social contract: the leadership being given a relatively free mandate to run the country in return for guaranteeing social stability and a reasonable modicum of prosperity. He is signaling that he can continue to fulfill his end of the bargain despite the hits taken by the Russian economy due to sanctions and falling energy prices.

But this year's press event was also important for what the Russian leader had to say about foreign policy. What is significant is that Putin's comments come in the aftermath of two very significant developments. First, U.S. Secretary of State John Kerry traveled to Moscow, putting the final nails in the coffin of the Obama administration's insistence that Russia remains "isolated" because of its actions in Ukraine and Syria. In the course of the last year, Putin has successfully re-inserted himself as an indispensable figure in global politics and Russia as a power which cannot be ignored or sidelined. Moreover, Kerry made comments which suggest that U.S. policy on Syria, which for the past four years has been characterized by a non-negotiable demand that Bashar al-Assad "must go," is open for modification. Kerry stated that U.S. goals in Syria do not include "regime change" per se and, echoing language used by the Russians in the past, noted that Syrians must decide their own future—while still including the caveat that the United States does not believe that Assad has any future in a post-conflict Syria. And before Kerry had arrived, the Kremlin was also gratified by the decision of Italian Prime Minister Matteo Renzi to block the automatic extension of EU sanctions against Russia, forcing them to be placed on the agenda of EU leaders. While the sanctions are likely to be renewed this time, Renzi's actions signaled that a number of European states are growing tired of the sanctions and are looking for ways to modify or remove sanctions altogether in 2016.

Thus, in his remarks, Putin offered several olive branches to the West, including a continued search for cooperation in the fight against terrorist organizations in the Middle East—which the Kremlin views as its best option for its rehabilitation after the Ukraine crisis—and the first (if limited) acknowledgments that there are Russians among the separatists in Eastern Ukraine, but still falling short of admitting a formal, official military presence on Ukrainian soil. Moreover, the attempt to shift some of the blame for delays and problems in implementing the Minsk-2 ceasefire plan to the Ukrainian side is meant to capitalize on growing signs of Ukraine fatigue in Western capitals with the apparent slow pace of reforms. Reading between the lines, Putin seems to be signaling a willingness to find a compromise on Ukraine that the West can live with, while trying to create the basis for closer cooperation over Syria—if the sticky question of Assad's immediate future can be taken off the table. That Moscow might be able to live without Assad in power over the long term was hinted at in comments that the scale and scope of the Russian military intervention in Syria, and the use of naval assets and airpower based on Russian soil, shows that Russia does not necessarily need the Syrian facilities in order to be able to project power in the region.

The very public dig at Turkey—and the suggestion that the recent shoot-down of a Russian plane by Turkish aircraft was an attempt by Ankara to curry favor with the United States—points to Putin's apparent willingness to throw away all of the work that has been done to build up the Russia-Turkey relationship over the last several years. The personal relationship between Putin and Recep Tayyip Erdogan, Turkey's president, seems ruptured beyond repair—this despite Erdogan's previous warm ties with the Russian leader (including Erdogan’s attendance at the 2014 Sochi Winter Olympic Games) and a sideline summit at the G-20 in Antalya last month that seemed to presage a warming in ties. This new hostility suggests not only the deep personal affront Putin feels for the shoot-down, but an assessment that between the apparent Kerry backdown on Assad, whom Turkey wants to see go, and the moving forward of the expansion of the Nord Stream pipeline, which removes the economic and security rationale for the Turkish Stream, Russia can afford to take a harder line with Ankara.

Of course, the comments which have drawn the most attention are Putin's endorsement of the candidacy of Donald Trump. While piously proclaiming that Russia does not seek to intervene in American domestic politics, and would find a way to work with anyone who is elected next year, Putin described the real-estate mogul and current Republican front-runner as an "outstanding man" and "unquestionably talented"—a marked change from other leaders who have been highly critical and disparaging of Trump. (Trump responded positively to those remarks several hours later, citing Putin as a respected world leader that he can do business with.)

Is Putin having fun with the U.S. media by all-but-endorsing Trump as the "absolute leader" in the polls—that this is a trolling effort of extraordinary magnitude by suggesting that what the United States needs is a Putin-style administration in office? Is this Putin's efforts to strike back at being the leading "bad guy" that most other U.S. presidential candidates have identified and promised to contain, slap down or put in his place? Or is he suggesting that a true "reset" can only occur with a Donald Trump in the Oval Office?

Whether or not Putin believes (or is being fed analysis) that Trump could win the presidency, Putin's praise of Trump reflects his contempt of much of the U.S. political establishment. He has dealt with two U.S. presidents who promised fundamental changes in the U.S.-Russia relationship but who, from his perspective, were unwilling to invest serious political capital and risk the ire of established interest groups to make real changes—and who instead were always trying to square the circle between engaging Russia and continuing to support the expansion of Euro-Atlantic institutions eastward. The praise of Trump signals Putin's interest in finding Western leaders who will come to the table to bargain in good nineteenth-century style, trading spheres of influence for cooperation. It also suggests that he does not take the rest of the presidential field—both Democrats and Republicans—all that seriously.

The joke may be on Putin if his gambles fail and the economy worsens. By the time of next year's gala event, we'll see whether his prediction of a Trump victory has been borne out by events—and whether whoever will succeed Barack Obama in the White House will consider engaging Putin along the Trump line.