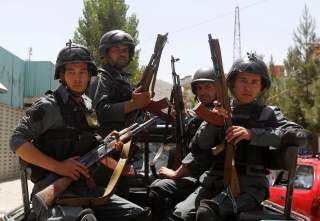 Since the president announced his intention to bolster the U.S. contingent in Afghanistan, there has been a good deal of discussion about the tactical and operational parameters that the increase in forces will permit. Despite billing his approach as an overall strategy for South Asia, however, there has been less focus on the geopolitical and geoeconomic aspects of the problem. In particular, reconciling Donald Trump’s desire for victory with a continued stress on an “America First” approach requires facing several critical issues that, so far, appear to be unaddressed.

The first is that the effort to achieve a self-sustaining Afghan security force structure—the notion that there is a glide path to wean Afghanistan off of massive amounts of external assistance in favor of being able to pay for its national security out of its own resources—is self-defeating. In the modern era, Afghanistan’s entire raison d'être as a state was to serve as the neutral keystone state buffering the major empires and powers while guaranteeing safe passage for goods and services traversing the various north-south and east-west Silk Roads. The very borders of Afghanistan were based not on ethnographic criteria but the need to separate the Russian, Chinese and Persian Empires from each other and the British Raj. The outside powers were therefore prepared to subsidize an Afghan state that could bribe and cajole the various tribes and factions to keep a modicum of order. Following the strategic logic that Derek Reveron and I have laid out, it was cheaper and easier for the major powers to pay Afghans to keep order than to waste blood and treasure (that is, to kill and die) trying to do it themselves.

That logic has not changed simply because we are now in the twenty-first century rather than the nineteenth.

The successor states to the “Great Game” empires—India and Pakistan, Iran, China, Russia and the Central Asian states—along with powers further afield who have been negatively impacted by the terrorism and drug trafficking that emanates from an ungoverned space. Therefore, all have an interest in sustaining a capable Afghan security force that can keep order.

Incentivizing this may prove less difficult than imagined, but it is connected to a second thorny problem: viewing Afghanistan in zero-sum terms. Afghanistan matters to two critical geoeconomic corridors which traverse its lands. First, there is the China-Pakistan Economic Corridor (CPEC) that ties Western China to the Indian Ocean and Persian Gulf port of Gwadar in Pakistan. Second, there is the north-south corridor that India and Iran have developed connecting India to Iran’s port of Chabahar and from there to Afghanistan and thence to Central Asia. Pakistan wants the strategic depth that southern Afghanistan provides, while India does not want to be permanently cut off from accessing traditional and future markets and sources of supply across the Eurasian plain. Interestingly, both corridors are set to run through different parts of Afghanistan where Pakistan and India have influence. The CPEC runs through the Pashtun regions to the south, while the Chabahar corridor runs through the Hazara, Tajik and Uzbek regions in the north.

For the last sixteen years, however, U.S. strategy has been to push for a strong central state in Afghanistan run from Kabul. This creates a zero-sum logic where either the Chinese-Pakistani variant or the Indo-Iranian (also backed by Russia and the Central Asian states) must win out entirely. Formally shifting to a guaranteed decentralized form of governance for Afghanistan—in keeping, after all, with the historic patterns observed in Afghanistan in the eighteenth and nineteenth centuries—could create conditions where both Pakistani and Indian interests could co-exist. We have seen how ideological and geopolitical rivals have been able to get their proxies to work together in the case of Lebanon, and increasingly it appears that such a modus vivendi is emerging in Syria.

One possibility, and one that has not apparently been discussed in great detail, is whether the United States should reconsider working with the Shanghai Cooperation Organization (SCO). It is, afterall, the only regional body that encompasses all the major Afghan stakeholders. The SCO is the only framework in which Russia, China, Pakistan, India and Iran meet together. The principal concern in the past has been the anti-American stance of the group, which ten years ago rejected a proposal to bring the United States onboard as an observer. With India and Pakistan now being full members of  the group, perhaps it is time for Washington to renew its request. Several years ago, Marcel de Haas penned an analysis of how NATO and the European Union could work with the SCO in Afghanistan. Given the announcement of the new strategy—and the president’s clear desire for genuine burden sharing—perhaps dusting off some of these ideas for a second look is warranted.

The United States has won every tactical engagement in Afghanistan. But the long-term stabilization of the country is a political project in which Afghans and their neighbors must be invested. In the nineteenth and early-twentieth centuries, Afghans drew profit from keeping security at home and keeping the geoeconomic lines of communication open. That model could provide the solution once again.

Image: Afghan policemen arrive at the site of a suicide attack followed by a clash between Afghan forces and insurgents during an attack on Iraq embassy in Kabul, Afghanistan, July 31, 2017. REUTERS/ Omar Sobhani