Qatar Is Playing a Dangerous Game of Political Chicken 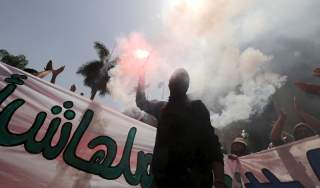 Last month a Saudi-led group of nations that includes Egypt, UAE and Bahrain modified the thirteen demands it had made on Qatar over a month ago and instead insisted on six principles. These principles are an attempt to convince the Qataris to combat extremism and terror, to prevent the expression of incitement to violence, to stop interfering in the internal affairs of other states, and to refrain from supporting illegal entities, among other things. And while moving from making demands to urging an acceptance of principles is being spoken of as a reconciliatory gesture on the part of the anti-Qatar bloc, the central contentious issue remains: Qatar’s support for the Muslim Brotherhood. The Saudi coalition knows what the experiences of numerous Muslim governments have long proven: the Muslim Brotherhood is an oppositionist movement that does not represent a sustainable form of governance, offers little in the way of social or economic programs, and some of its members have been linked to political violence and jihadist terror.

The current crisis has a geopolitical and historico-religious context. Qatar is a small island nation of 2.5 million people (of which fewer than 10 percent are nationals) that has long felt begrudgingly subordinate to larger Arab states like Saudi Arabia and Egypt. Its ruling family, Al Thanis, also trace their roots to the Salafist cleric, Muhammad ibn Abdul-Wahhab, who allied with the Saudi ruling family in the eighteenth century to establish the first Saudi state (the current Kingdom is the third manifestation of the Saudi state).

Fueled by a desire to exercise outsized influence and a sense of its own importance within the original lineage of Islam, Qatar has long harbored Muslim Brotherhood leaders and supported its attempts to seize power in various Arab nations. The former emir, Sheikh Hamad bin Khalifa Al Thani, who is the father of the current emir, Sheikh Tamim bin Hamad Al Thani, is very close with the Muslim Brotherhood’s current spiritual leader, Egyptian-born cleric Sheikh Yusuf al-Qaradawi, who has lived in Qatar since 1961. In addition, Qatar has funded the Al Jazeera network, which has long provided a global platform for Sheikh Qaradawi and others to promote the movement's rigid political theocratic manifesto.

The Muslim Brotherhood was formed in Egypt in 1928 and spread via affiliate organizations into Tunisia, Morocco, Syria, Jordan and Palestine, among others. Yet, in almost every case, it has proven incapable of working successfully and/or peacefully within established sovereign political systems. This has been largely due to three factors: its emphasis on religious ideology over developmental economics has alienated Arab populaces who have a growing preference for secular and effective governance; its inability to keep its numerous affiliates in step has led to the perception that it is too riddled with infighting to coherently govern; and it has been unable to quell suspicions regarding its connection to extremist violence.

The Muslim Brotherhood has never gained power in Egypt, save for a short period after the so-called Arab Spring when it proved even more inept than the Mubarak regime at solving the economic and social problems of the country, and the army, with large popular support, removed it from power. With certain Muslim Brotherhood elements having carried out terrorist attacks against its security officers, Egypt’s Supreme Council for Islamic Affairs has called the Muslim Brotherhood “the progenitor of the Islamic State and similar terrorist groups.”

While not all Muslim Brotherhood groups have been linked to terrorism, those in Egypt, Jordan and Palestine have been. The Muslim Brotherhood’s parent organization is currently listed as a terrorist group by all the nations in the Saudi-led coalition, and the U.S. government has been debating for decades whether or not to place the group on its Foreign Terrorist Organization list. Most of those who oppose the listing freely admit that it has been linked to violence but claim that listing it would be inimical to political progress.

As far as the Saudis and their allies are concerned, Qatar is playing a dangerous, two-faced game. While the Qataris support the Muslim Brotherhood’s push to come to power through democracy and speak incessantly of democracy being the future of the Arab world, they have done nothing to promote democracy in their own nation. In essence, the anti-Qatar bloc can see this ruse for what it is: an attempt by the Qataris to gain undue influence in the Arab world via the Muslim Brotherhood gaining control of regional governments.

And yet, as I have shown, the Muslim Brotherhood has failed for nearly a century to offer a viable form of governance, which is why Qatar’s long and extensive support of the group must not stand. Just as the United States is right to pressure other nations to cut off support for ISIS and Al Qaeda, Saudi Arabia and its allies are right to pressure Qatar to end its support for the Muslim Brotherhood. Not only does it have a record of violence, but its attempts to represent itself as a viable political party run counter to its many years of civic failure and its stated goal of overthrowing all Arab governments that do not support its religious-based revolution.