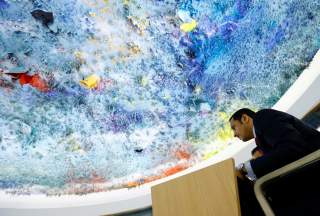 The 2017 Gulf Crisis between Qatar and its GCC neighbors has developed into a clash of narratives that concerns not only the various regional interests in the Middle East, but also vital U.S. national interests. The Quartet (Saudi Arabia, UAE, Bahrain and Egypt) has justified its embargo against Qatar due to its alleged political, ideological and financial support to non-state terror groups across the Middle East, especially during the Arab Spring.

The UAE in particular has invested in a public-diplomacy campaign in Washington to persuade key policy circles that the small gas-rich emirate of Qatar has been one of the main sponsors of terrorism in the region. The Trump administration’s response has been ambiguous. While the White House initially embraced the joint effort of the Quartet to “correct” Qatar’s alleged Islamist foreign policy, the State Department and the Department of Defense were more cautious.

A more nuanced understanding of Qatar’s foreign and security policy during the Arab Spring is needed in order to assess how Doha has advanced its interests and values since the late 1990s. Qatar’s Syria policy is an excellent case study to illustrate Doha’s ambitions, intentions and its flaws with implementation.

When the first protestors took to the streets of Tunisia in late 2010, the then emir Hamad bin Khalifa Al Thani saw an opportunity to put his worldview into practice. Running state affairs since the early 1990s, Hamad proposed an avenue of social, economic and political reform that would help the small state propel into the twenty-first century. Qatar had to emancipate itself from the ultra-conservative influence of Saudi Arabia by overcoming entrenched social norms, liberalizing education and the job market, and introducing civil liberties. Although Qatar was surely not en route to becoming a liberal democracy, Hamad nonetheless invested in liberal values such as the freedom of religion, freedom of speech, and a pluralistic sociopolitical discourse between the emir and the public. Apart from exploring the incredible wealth of natural gas, Hamad was eager to ensure social justice, equal distribution of wealth among citizens and an inclusive society. In many ways, Qatar, has become a more liberal counterpart to the authoritarian regimes of the Arab World.

In late 2010 and early 2011, Hamad, presiding over the richest country per capita in the world, hoped that maintaining a liberal political view would support those rising up against authoritarian regimes would bring about a transformative shift in the region’s direction. Similar to President Clinton who spoke about “being on the right side of history,” Hamad envisioned an “Arab Awakening”—a dream which proved more difficult to realize in practice.

After the fall of the regimes in Tunisia and Egypt, and the outbreak of civil war in Libya, Qatar turned its attention to Syria in March 2011. Hamad, making use of the royal family’s personal relationship with the Assads, sent his son Tamim to convince the Syrian president to step down (Tamim is now the Emir of Qatar). In return for ensuring a path for political reform and a peaceful transition of power, Tamim promised compensation and financial aid to Assad to make this transition as smooth as possible. The Syrian president declined, which shifted Qatar’s posture towards Damascus from engagement to confrontation.

In close coordination with the Obama administration, Doha started to work on an initiative to isolate the Assad regime in the Arab League while setting up a governing body representing the Syrian opposition: the Syrian National Council. Qatar shared the Western vision for a new Syria based on sociopolitical inclusion, social justice and civil liberties—a vision that did not necessarily mandate a transition to liberal democracy. The council was to become the strategic body managing the Syrian opposition as a quasi-government in exile representing then 60 percent of all Syrian opposition groups. From the beginning, the Qatari government was adamant that any opposition initiative had to be inclusive and represent the “will of the Syrian people”—an ambition that might appear unachievable in hindsight considering the multiplicity of different agendas dividing the opposition.

The most dominant force in the opposition at large (the council in particular) was the Muslim Brotherhood and its affiliates. Syria’s oldest and most extensive opposition group had been relentlessly repressed by the regime since the 1970s. Due to existing personal relationships with the Syrian Brotherhood, Qatar was immediately drawn to the moderate Islamists who presented themselves as well organized and influential, and who had a clear sociopolitical vision for a new Syria. When it became apparent that the Syrian National Council was getting bogged down in turf wars and political rivalries between different oppositional camps, the far-reaching network of the brotherhood appeared as an alternative means for Qatar to deliver goods to Syrians cut off from public services by the Assad regime.

By early 2012, more and more reports surfaced that the military councils, supervised by the council, developed into corrupt patronage networks failing to provide Syrians with aid and security inclusively. It was then that Doha began to reach out to individual groups in northern Syria—moderate Islamist groups that were often linked to the Muslim Brotherhood. Qatar felt these groups had a better track record of providing public goods as they had long been supplementing regime services locally through their charities—something that independent research into the effectiveness of Islamist councils confirms.

Thus, Qatar’s Syria policy was neither ideological nor religious, but pragmatic. Qatar’s networks with Islamists evolved from the emirate’s tradition of maintaining a place of refuge for the politically persecuted and the country’s attempt to hedge its foreign policy through diversification. Moreover, there was a widespread belief among senior policymakers in Qatar that political Islam provided the only functional opposition to authoritarianism. Also, Doha believed that the charitable work of Islamist groups was more effective, reliable and inclusive than that of secular charities. Thus, at a time when the existing sociopolitical order of the Arab World disintegrated, Qatar perceived Islamist groups as the only available force able to fill the sociopolitical void left by the failing regimes—at least temporarily.

Qatar initially provided Islamist military councils with financial and nonmilitary support that allowed these councils, which were widely underfunded by the Syrian National Council, to provide public goods and services in areas liberated from regime forces. These groups were comprised of indigenous Syrians, held together by their Islamist creed, and guided by principles of social inclusion and a commitment to public security—all at a time when salafi-jihadists were still a tiny minority in Syria.

While Qatar’s ambitions were noble, the idealist approach to supporting widely autonomous rebel groups proved to be difficult. Like the United States, Saudi Arabia and Turkey had all invested in training and equipping rebels on the ground, Qatar found it hard to retain control over the operational and tactical activities of its protégés. At the same time the Obama administration’s strategy in Syria was hesitant at best, delaying Qatar’s support for moderate rebels allowing salafi-jihadist groups to gain ground. The nonpermissive environment created by the Obama administration—and the failure of the international community to whole-heartedly back moderate Islamist rebels—drove moderates into the hands of radicals.

Further, it was the more decisive intervention of Iran and Russia over the course of the civil war that turned the tides of the conflict. As Assad’s sponsors turned on the moderate opposition, Jabhat al-Nusra and Daesh were able to consolidate their power, fulfilling Assad’s claim that his regime was fighting terrorism.

When it became apparent that Syria’s moderate opposition was fighting an uphill battle amid a constrained geostrategic environment where no Western powers were willing to fully commit to being “on the right side of history,” Qatar withdrew its military liaison officers from Syria in 2014. Qatar’s charities continued providing aid to local councils. But with the proliferation of salafi-jihadists in Syria, it was no longer feasible to provide military support to groups on the ground.

Qatar’s efforts to indirectly reach out to Ahrar al-Sham and Jabhat al-Nusra were thwarted by the unwillingness of those groups to comply with Qatar’s strategic narrative of serving the Syrian people inclusively in order to create a more liberal sociopolitical system in a post-Assad Syria—a future that neither Qatar nor Saudi Arabia will be able to shape. Now, the protégés of those groups have been widely defeated by radical elements that came to dominate Syria’s opposition in 2014.

Hence, despite its strategic miscalculations and clumsy operational implementation, Qatar’s objectives in Syria were widely aligned with those of the West. While the United States and Europe shied away from determinedly confronting Assad’s heinous killing spree, Qatar tried to help Syrians build a post-authoritarian future. It did so relying on Syria’s moderate opposition—groups promising to embrace pluralism, civil liberties and socio-political inclusion. Qatar neither sought to fund or arm the likes of Jabhat al-Nusra or Daesh as they are incompatible with Doha’s relatively liberal raison d’état. The fact that Assad and his henchmen are now on a winning streak is the collective failure of the international community to come to the Syrian people’s defense.

Andreas Krieg, Ph.D. is an assistant professor in defense studies at King’s College London and has worked with both the British Armed Forces and the Qatari Armed Forces. Andrew Bowen, Ph.D. is a visiting scholar at the American Enterprise Institute and has an upcoming book out this spring on U.S.-Syrian Relations.