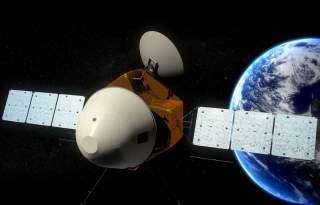 IN JANUARY 2017, Chinese scientists officially began experiments using the world’s first quantum-enabled satellite, which will carry out a series of tests aimed at investigating space-based quantum communications over the course of the next two years. The satellite is the first of its kind and was officially launched in August 2016 from the Gobi Desert. The satellite—named Micius after the Chinese scientist and philosopher—was developed by Chinese and Austrian scientists within the Quantum Experiments at Space Scale (QUESS) project. The project has drawn attention from experts and media outlets across the globe, as quantum-enabled satellites could provide the infrastructure for future hack-proof communication networks. At a moment when cyberattacks are carried out with increasing ease, improving the security of communications is crucial for guaranteeing the protection of sensitive information for states, private entities and individuals. For states, securing communications also entails strategic geopolitical advantages. What are the possible implications of quantum-enabled satellite technology, in the context of current global security issues and China’s expanding engineering capabilities in space and elsewhere?

Until now, most technology has been based on classical laws of physics (Newtonian and others). Modern communication technology uses radio waves, which transfer data encrypted with complex mathematical algorithms. The complexity of these algorithms ensures that third parties have a hard time cracking them. However, with stronger computing power and the increasing sophistication of hacking technologies, such methods of communication are increasingly vulnerable to interference.

This is where quantum physics comes in. According to quantum theory, subatomic particles can act as if they are in two places at once. This property can be manipulated by scientists, so that a particle can adopt either one of two states (for example spinning upwards or spinning downwards). If the particle is not observed, it will be in a state of “superposition.” That is, it will be a combination of both states. However, if the particle is observed, the act of observing it will invariably alter its state, thus collapsing the “superposition.” This phenomenon is known as the “observer effect.” Scientists are able to manipulate several particles into a state of “superposition,” in which they are fused and dependent on each other—known as “quantum entanglement.”

Previous experiments with quantum encryption had some success, yet the medium was not appropriate. Quantum-entangled messages were sent through optical fibers; however, the problem was that the signal would end up being absorbed by the medium and therefore was not feasible to do over long distances. Sending a quantum-entangled message over long distances would require “quantum repeaters”: devices that capture and retransmit the quantum information. The alternative was pioneered by China, and it involves beaming entangled photons through the vacuum of space, where nothing can absorb them.

The Chinese satellite functions by firing a laser through a crystal, creating a pair of photons (miniscule subatomic particles) in a state of “entanglement.” One half of each pair is then sent to two separate stations on Earth. The goal is to generate communication keys encrypted with groups of entangled photons, in which the information is encoded by a set of random numbers generated between two users. If a third party attempts to observe or interfere with one of the beams of entangled photons, quantum theory dictates that the encryption key will be altered and it will be rendered unreadable, due to the aforementioned “observer effect.” In this case, the user may change the message or cancel it.

The QUESS program is divided into three phases. The first stage of the experiment, recently achieved by scientists, involved teleporting a photon from a ground station in China to the satellite, establishing a satellite-to-ground quantum network. The second and third stages are more ambitious, as they aim to achieve quantum entanglement between Beijing and Graz (near Vienna). In 2017, it was reported that the QUESS had had its first success, when it beamed photons between the satellite and two ground stations and showed that the particles could remain in a linked quantum state at a distance of 1,200 km—dwarfing the previous distance record of 144 km, set on the Canary Islands. This experiment used laser beams mounted on a satellite. The beam was split and generated pairs of photons which stayed in an entangled state. The entangled photons were then funneled into two telescopes which projected them at two separate stations: one was in Delingha (in the Tibetan Plateau), and the other one 1,203 km away, at the Gaomeigu Observatory in Lijiang.

After establishing reliable communications links using this technique—the most technically challenging element of the experiments—it would then be possible to create “super-secure” quantum-enabled communication networks, simply by adding satellites.

Within the next five years, Chinese scientists hope to conduct a follow-up experiment, in which a quantum-communications satellite would be placed in a higher orbit of 20,000 km.

The implications for global security are plentiful. If quantum-encryption technology is eventually employed on a wide scale, hacking, wire-tapping or code cracking in both the communication and military domains would be rendered obsolete—as quantum-encrypted keys cannot theoretically be observed by third parties. This issue is of great significance, given the increasing influence of cyberattackers in domestic affairs. In the United States, attacks and cyberespionage from Russian cyberattackers—allegedly in collaboration with the Kremlin—effectively revealed private information (including many e-mails) of Democratic party officials, damaging their credibility during the 2016 presidential election campaign. This tactic has also been tested during elections in Ukraine. Quantum technology could also be used to prevent large-scale breaches of public and private information, preventing events like the 2013 Yahoo data breach, which affected over one billion users.

Quantum technological development could also fuel progress in the rapidly progressing field of quantum computing. According to analysts, the “quantum internet” could possess a “distributed computational power” greatly exceeding that of the classical Internet. If communications within such a system were secured with quantum encryption, it would simultaneously support a technological revolution and decrease global vulnerability to disruptive attacks on online infrastructures, all whilst users benefit from faster and more powerful Internet services.

For militaries, the potential gains of quantum-enabled computing networks are clear. If the QUESS project is a success, China could gain an upper-hand in its space-based intelligence operations, including surveillance, reconnaissance, navigation, environmental monitoring, communications and attack assessment. Assuming the technology operates successfully under the laws of quantum theory, cyberattacks on satellites would become impossible, meaning that adversaries would not be able to interfere with military communications, for example by providing false coordinates or jamming signals. Strengthening these services would bolster China’s geopolitical power-projection and increase its presence as a leading player in space technology. The latter could present China with a means of deterring potential future attacks in space or on Earth.

Quantum-enabled military communications could thus present China with an opportunity to reduce U.S. dominance in international affairs—in terms of military sophistication as well as global geopolitical and economic influence. Of course, there are several factors driving Chinese military and economic development, while the foreign policy of the Trump administration could also alter the United States’ role as the dominant global geopolitical power. Quantum technological development could also accelerate the shift towards a multipolar power-balance in international relations—which would be in China’s favor.

Although the United States has several leading experts in quantum technologies from elite research institutions, U.S. public investment in the field has so far been limited compared to efforts in Asia and Europe. As a consequence, China is currently leading the way. The White House called for heavy investment and the development of a coherent plan for tapping into the potential of quantum information science in July 2016, suggesting that Washington is starting to recognize the potential of such technologies.

By 2030, China aims to establish a network of quantum satellites supporting a quantum internet. However, there are some prominent obstacles to achieving this goal. As previously mentioned, the project is attempting to significantly increase the record distance for successful quantum entanglement between two stations on Earth. To achieve this leap, the lasers being used to beam the entangled photons between stations will have to achieve a tremendously high level of precision to reach the selected targets, as atmospheric inference and movement on the ground can easily obscure their trajectory and hinder synchronization between stations. Scientists may also struggle to minimize attenuation over such a long distance. Even if quantum entanglement is achieved, the rate of data transmission for communications via quantum encryption would initially be rudimentary—somewhat like telegraph communication. It may require some time before the technology could be applicable to Internet and communication services. In addition, the applicability of quantum technologies to database protection depends on whether quantum computing for Internet services, which are currently dominated by binary technologies, become widely used.

Given these limitations, the arrival of super-secure communication networks may not immediately be on the horizon—a fact which grants other states the opportunity to catch up. By innovating, China is assuming a financial burden. Other states may well replicate the technology if it is successful.

Here it is worth reflecting on how and why China has become a global leader in quantum technologies. In recent years, Beijing has poured vast sums of money into technological development, including into its extremely ambitious space program. The Chinese military considers “space dominance” a prerequisite for “information dominance.” Beijing seemingly wishes to assert dominance in air and space as a strategic advantage for achieving its military ambitions—such as its controversial expansion into the South China Sea. Achieving tangible technological feats, such as the Micius satellite, not only facilitates military advancements, but can also boost national pride and legitimize large financial investments in technology. China’s space program is indicative of the nation’s approach to technological development. Although the program dates back to the 1950s, China only launched its first satellite in 1970, after Russia and the United States had already placed several in orbit. Since then, China’s space program has progressed exponentially, thanks to heavy financial investments made possible by decades of rapid economic growth. Beijing now operates its own space navigation satellite—known as BeiDou—providing accurate geolocation information for Chinese weapon systems and communication coverage for its military. By 2020, China expects to achieve global network coverage using thirty-five satellites. The Chinese space program also aims to launch a permanent manned space station by 2022, having already sent two space laboratories into orbit. With the International Space Station (ISS) set to retire before 2028, China could become the only country with a space station, meaning that other states may look to China for facilities to carry out research. Beijing sees the development of space missions as a means of sparking innovation in the country’s fast-growing technology sector, including robotics, artificial intelligence (AI) and aviation. In 2013, China landed a 1.2-ton spacecraft “Chang’e-3” on the Moon, where it delivered a rover called Yutu with a land-penetrating radar that was able to measure the lunar subsurface with unprecedented resolution. It also launched a space lab in September 2016 with several scientific payloads. The thoroughness and dynamism of the space-science program also brought European partners to the table. Joint projects between the European Space Agency and the Chinese Academy of Sciences (which hosts the Chinese National Space Science Centre) are expected in the coming decades in areas of research such as space weather and black holes.