Question: Would a Republican President Really Undo the Iran Deal? 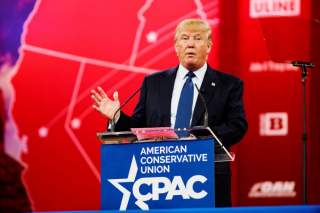 Even if President Obama’s controversial deal with Iran survives next month’s pitched battle in Congress, the triumph could well prove to be short-lived.  In particular, the distinct possibility will remain that the Iran deal gets undone by his immediate successor in the White House.  And with would-be Republican nominees falling over themselves to criticize Obama’s approach to the Iranian nuclear question, such an eventuality cannot be ruled out.  Importantly, this is true whether or not reversing the Iran deal will make strategic sense in 2017.

At first glance, it might seem unlikely that any incoming president would possess either the will or the way to nix the Iran deal. Upon assuming office 17 months from now, the next Commander-in-Chief will probably be briefed by members of the permanent bureaucracy that President Obama, John Kerry and America’s allies were correct all along: that the Geneva framework is the best available option to deny Iran a nuclear weapons capability.  The preponderance of official advice will no doubt be against shattering the hard-won international consensus that now exists regarding how to deal with Iran’s nuclear ambitions.

Moreover, what will be the alternatives to keeping the Obama deal in place? Is it really likely that the next U.S. president will be able to recreate an effective multilateral sanctions regime against Iran, still less mobilize domestic and international support for a more radical militaristic approach? Assuming no major provocations by Tehran, the reality is that the future probably holds scant opportunity to replace a diplomatic framework that has taken years to construct and, by January 2017, will have been place for a substantial amount of time.

Taken together, bureaucratic and international opposition to upending the Iran deal will certainly militate against a future Republican president making good on their promise to reverse what President Obama will have left in place. But this does not mean that the Iran deal will be safe and secure under a new administration. On the contrary, there are strong countervailing reasons to doubt that either behind-the-scenes bureaucratic briefings or international complaints about U.S. unilateralism would be enough to preserve the status quo. In fact, the evidence might actually point in the opposite direction.

As Jonathan Bernstein noted a few years ago, the available research shows that, by and large, U.S. presidents do try to make good on promises made during election campaigns.  Not all of a presidential candidate’s pledges can be enacted into legislation once they become the actual president, of course, but this is usually more to do with opposition in Congress than cold feet in the White House. And so if history is any guide, there is good reason to expect that any Republican successor to Obama would make a good faith effort at undoing what so many critics have lambasted as an unconscionable policy of “appeasement.”

Not that it should be surprising for newly inaugurated presidents to want to fulfill their campaign pledges. After all, it is important for presidents—like all politicians—to maintain the credibility of their word.  And if a specific pledge was made to curry favor with a particular constituency of supporters (opposition to the Iran deal plays well with foreign policy hawks in the GOP, for example), then the same political logic that led a candidate to make a promise will probably compel them to follow through on that pledge once they have entered office.

Crucially, presidents will often act to implement their campaign pledges even if circumstances change between their campaign for office and their assumption of power. Consider President Kennedy’s actions to redress the so-called “missile gap” upon his inauguration in 1961.  As a senator, Kennedy had spent years castigating the Eisenhower administration for allowing the Soviet Union to gain a decisive advantage over the United States in terms of nuclear missile delivery systems. He used the issue to great effect during the 1960 campaign, accusing the Republicans of having dropped the ball on national security and promising a revival of U.S. military primacy under Democratic leadership.

The only hitch was that no such missile gap actually existed. Kennedy had relied upon inaccurate press reports when making his statements about U.S. and Soviet nuclear capabilities, and had only been allowed to do so because the Eisenhower White House was muted in its efforts to debunk the claims (much to the chagrin of Vice-President Richard Nixon, who later blamed public unhappiness with Eisenhower’s foreign policies for his loss to Kennedy).

Kennedy finally became informed that the missile gap was a myth when he became president—if, indeed, he had ever truly believed in it. Yet Kennedy took no measures to reassure the American public that the missile gap was nothing to worry about.  To do so would have been to undermine a key plank of what had been a winning election campaign.  Nor did he change his plans to augment the U.S. military establishment, including its nuclear arsenal; as Christopher Preble argues, “the president and many of his advisers believed that changes to the nation’s military were needed regardless of the missile gap.”

Instead, Kennedy pressed ahead with a military buildup designed to close the imaginary gap between U.S. and Soviet forces.  Doing so allowed Kennedy to avoid making an embarrassing U-Turn on an important aspect of foreign policy and solidified his support among that section of the Democratic Party with a vested interest in high levels of military spending.  In effect, Kennedy happily maintained the fiction of the missile gap as cover for policies he wanted to pursue for other reasons.  Today, of course, it is the Republican Party that stands to gain the most from a robust and unilateralist military stance, which means that future Republican presidents might similarly be in the market for convenient political cover to justify expansionist policies.

The lesson for the future of the Iran deal is this: however effective Obama’s policy on Iran turns out to be in the eyes of objective observers, if the next President of the United States belongs to the Republican Party then there is a good chance that steps will be taken to undo the budding rapprochement.  Even a Republican president privately convinced that a diplomatic approach is sufficient to satisfy vital U.S. interests would face strong political and partisan incentives to pursue a reversal of unpopular Obama-era policies. For while good policy might well depend upon good politics, the reverse is sadly not always true. As such, supporters of the Iran deal had better hope for a Democratic victory in 2016.