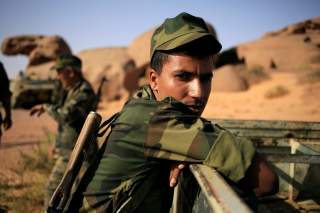 In August 2018, in a move that was largely overlooked by international observers, the Moroccan government unveiled its plan to reinstate military conscription for the country’s youth. The effort, made law on February 8, is intended to address a variety of domestic ills, from unemployment to social cohesion. But, unless managed carefully, the process could end up having far reaching—and potentially adverse—long-term consequences for the kingdom.

Compulsory military service is certainly not new to the kingdom. It was first instituted back in 1966 under the rule of King Hassan II. In 2006, however, the policy was ended by the country’s current monarch, Mohammed VI, for essentially two reasons.

The first was cost; after years of conscription, the price tag for maintaining a large standing army and continuously training new conscripts became simply unsustainable for the country’s then-lackluster economy. Second, the policy also came to be seen as a potential security liability, because the government at the time could do little to prevent recruits sympathetic to terrorist causes from joining the military’s ranks.

Now, however, the Moroccan monarchy is restarting the program. Under the now codified law, able-bodied Moroccan citizens between the ages nineteen and twenty-five will be required to serve a compulsory one-year term in the country’s armed forces, or face fines and prison time. The measure has been fast-tracked through the Moroccan political system, and by this Autumn Morocco’s 175,000-man army will have grown by nearly ten thousand conscripts with fifteen thousand new ones rotating in every year after.

The kingdom’s motivations in restarting conscription are clear. Palace spokesperson Abdelhak Lamrini explained in a recent interview that “the purpose of applying military service is to inculcate the spirit of patriotism,” and “also opens the way to their integration into professional and social life.”

There are practical considerations at play as well. With a national unemployment rate of 9.3 percent and a youth unemployment rate nearly triple that figure, Morocco’s young people desperately need occupations. That need is no small matter, because the country’s youth is the nation’s largest demographic by far; fully 60 percent of the national population of nearly thirty-six million is estimated to be under thirty years old.

Moreover, with a larger military, the kingdom can better manage its foreign-policy goals—chief among them further solidifying its longstanding sovereign claims to the Western Sahara, which are still disputed by both regional rival Algeria and the leftist Polisario movement. In addition, an expansion of Morocco’s military would also serve to provide greater security guarantees to the burgeoning commercial investments being made in the country by African and European nations.

But Morocco’s return to conscription shouldn’t be seen as a catch-all cure. Financial and social inequality is rampant in the country; nearly half of all wealth is concentrated in the top 20 percent of Moroccans, and the richest 10 percent of Morocco’s citizens consume one third of all resources and goods. There is little evidence that twelve months of military pay would do anything to ameliorate these conditions.

Indeed, Morocco’s Gini index—the metric by which societal financial inequality is measured—is the highest of any stable North African country, and actually increased between the time mandatory military service laws were introduced and when they were repealed. If history is any indication, then the same will hold true in the years ahead.

As well, mandatory military service will do little to address the underlying social grievances plaguing Moroccan society. For over a year now, Moroccans have been protesting a host of judicial and governmental irregularities, and as recently as December 2018 Moroccan workers donned yellow vests to emulate demonstrations in France and lobby for improved living conditions and lower taxes. These simmering grievances are likely to dilute the monarchy’s current push for greater patriotism.

Finally, and perhaps most problematically, compulsory military service revives a longstanding security concern. Morocco has long struggled with domestic radicalization; since 2015, the national government has uprooted 40 domestic terrorist cells, and no fewer than 1,700 Moroccans are estimated to have joined the ranks of the Islamic State in recent years. While Rabat has done much in recent years to address the phenomenon at home (including instituting a sweeping new counterterrorism strategy and building a robust “soft power” program to prevent extremism), the reintroduction of military conscription adds a new variable to the kingdom’s terrorism problem. That is, if the process is not managed properly, the country’s armed forces could become a locus for arming and training the very same people who are seeking to disrupt domestic order.

Despite these potential woes, mandatory military service is, again, the law of the land in Morocco. The short-term economic and political benefits of such a policy are clear. But the long-term outlook is considerably less so. And, if it isn’t carefully calibrated, the kingdom’s new strategy could exacerbate existing problems within the country, much to the detriment of stability there.

Jacob McCarty is a research fellow at the American Foreign Policy Council in Washington, DC.