The Race to Replace Nikki Haley Is On 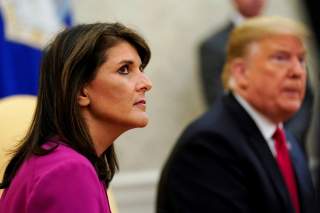 Nikki Haley’s resignation earlier this week has set off a horse race inside administration circles to replace her. The early favorite? Dina Powell, former deputy to National Security Advisor H. R. McMaster and currently a top executive at Goldman Sachs.

One problem: Powell is deeply unpopular with Donald Trump’s base. “All the right people don’t like her and all the wrong ones do,” a veteran conservative activist close with the White House told me Wednesday. A case in point: Max Boot, the ex-conservative NeverTrumper, endorsed her as having the right stuff on Tuesday night.

Breitbart News is running a seemingly-coordinated effort against her appointment, publishing several articles critical of her in the hours since the announcement of Haley’s resignation. Powell’s service under McMaster, widely disliked among Trump’s hardline base, is a source of suspicion, as is her work with Goldman, a pillar of the American establishment. The news organization has been successful in helping pressure the administration on previous decisions: most recently, the sabotage of Raymond Kethledge, in favor of Brett Kavanaugh, as Trump’s Supreme Court choice this past summer.

The president has said he will announce a replacement in a few weeks, likely before the midterm elections. It is the most high-profile change in the administration since the major spring moves of John Bolton replacing McMaster, and Secretary of State Mike Pompeo taking the reins from Rex Tillerson.

Haley’s departure represents the exodus of the most high-profile woman in its ranks, and coming just days after the closure of the troubling confirmation battle for Justice Kavanaugh. The pressure to replace Haley with a woman is considerable. Other leading candidates include Kelly Craft, the current ambassador to Canada and spouse of billionaire Joe Craft. Craft’s tenure has been dominated by the NAFTA renegotiation and tensions between Washington and Ottawa that she has sometimes sought to smooth.

An emerging dark horse candidate for the post is Heather Nauert, the State Department spokeswoman and Fox News alumnus. The president is, of course, exceedingly devoted to the network and has larded his administration with some of its ex-stars, including Bolton. Tom Rogan, the conservative commentator and host of The McLaughlin Group, writes in the Washington Examiner: “Nauert has earned respect from journalists and State Department officials for her direction of the department’s public affairs efforts. A frequent traveling partner with . . .  Pompeo, Nauert is well versed in the major foreign policy issues. But what most suits Nauert for the U.N. position is her confident understanding of Russian information warfare.”

Even former Democratic Senator and Vice Presidential Nominee Joe Lieberman, long-friendly with the Right, is also reportedly on Trump’s shortlist, if a report in Lieberman’s hometown paper, The Connecticut Mirror, is to be believed. Seemingly problematic would be Lieberman’s deep friendship with the late-Sen. John McCain, who said on his deathbed that he regretted not picking Lieberman as a his running mate for president in 2008. Lieberman would have to join Sen. Lindsey Graham in shifting hard towards Trump, while keeping ties with the McCain family.

Lieberman has been mostly complimentary of Trump’s foreign policy, especially with respect to Iran. His appointment would give the National Council for the Resistance of Iran, associated with the MEK, another ally in the administration.

More distant possibilities remain. Restrainers hold out hope for the appointment of Rand Paul, ascendant within Trump’s inner circle. It would be “brilliant,” says an ally of Paul. “Much more aligned” with foreign-policy realism than Haley, and would provide the 2016 presidential candidate a “bigger stage” than his current post. Importantly for Trump, Paul has defended him on the Russia matter, including the Helsinki meeting with Russian president Vladimir Putin. The nomination would position Paul to “replace Pompeo down the road,” say the political ally, as well as amp up his foreign-policy bona fides as he continues to make the case for America to take a different course. Others cheer the possible nomination of retired Col. Douglas MacGregor, who has been considered for national security advisor before.

On the more hawkish end, there is much discussion of Robert C. O’Brien, a Bolton ally. A supporter and friend of O’Brien texts: “He is smart, never signed a NeverTrump letter, has a lot of administration support, is good on television, and . . . was tough on China as far back as a 2010.”

Perhaps the far most likely alternative to the front-runner Powell remains Richard Grenell, Trump’s rising star ambassador to Germany. The president indicated Tuesday that he would likely prefer to keep Grenell in Europe, but did not expressly rule out his appointment.

Some of Grenell’s most prominent supporters, who helped shepherd his ambassadorial nomination through the Senate, are tweeting out their desire to see him selected. He would be far more in line with the president’s hardline base, and is also associated with Bolton.

Trump’s management style is to give favorite players “portfolios,” and not necessarily confine appointees to their officially-defined roles. Pompeo has the North Korea portfolio, while Bolton has the Russia and Syria portfolio.

Above all, this is not the Obama administration. While the administration may degrade the global importance of the UN, the ambassadorship in Turtle Bay is more important than it was under Trump’s liberal Democratic predecessor. Haley had cabinet status, which her predecessor Samantha Power did not enjoy. For now, Trump is enjoying the drama around choosing a new ambassador. ““We’re looking at many people,” Trump said on Wednesday. “There are some tremendous, talented people.”