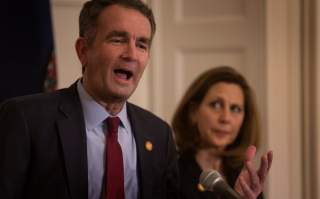 RICHMOND — It takes a lot to overshadow Donald Trump’s Washington, but in the last seven days the Commonwealth of Virginia has done just that.

Misery loves company, and the fact that Northam’s transgressions are no longer in isolation is seen by many as helpful to keeping him in the governor’s mansion, according to several Virginia lawmakers and longtime political hands.

Northam and Herring have admitted to blackface scandals; Fairfax is fighting an allegation of rape. All three are Democrats, and won on the statewide ticket that romped in 2017. Norment, a Republican, is facing allegations that he oversaw the compilation of a college yearbook in 1970s that was littered with offensive racial humor.

The Virginian capitol was swarmed this week by national political reporters, which was unusual for the old Confederate stronghold, even during the intense winter months of “Session,” as it’s called, when the Virginia General Assembly meets during January and February, before adjourning for the year. “Really hard to believe,” a longtime Virginian political figure told me this week. “Especially in staid, non-go-go Virginia.”

If Northam, Fairfax and Herring were all to resign, then the governorship would go to Kirk Cox, House speaker and a Republican, who won his job on a coin toss after a deadlock for control of the House of Delegates in 2017. The last week, longtime observers of the state say, has been a disaster on two fronts: for the rehabilitation of the image of state from its racist past, and for the power of the Virginia Democratic Party, which looked unstoppable following the 2017 election as the state became “blue.”

There are allegations of knife-fighting galore. Herring, the attorney general, was said to have not wanted to Northam to resign, despite calling for that outcome, according to a source familiar with his thinking. Herring has been attorney general since 2014 and made a veritable Blair-Brown deal with Northam not to run against him. But if Northam quit now, then Fairfax would become governor and be eligible to run for a full term of his own in 2021—as the incumbent. Virginia has one-term governors and a seven-year governor would be without modern precedent—but neither would a gubernatorial resignation. But the intrigue goes deeper. Many here suspect the rising star mayor of Richmond, Levar Stoney, of fueling the fire around Fairfax; Stoney denies this. But at a minimum, Stoney is laying the groundwork to run statewide
as lieutenant governor. Come 2021, the pressure for the Democrats to nominate a scandal-free African-American could be insurmountable; Stoney is keeping his options open.

Meanwhile, Republicans can’t believe their luck. Many fretted that the Old Dominion, amid unprecedented demographic changes driven by the state’s vibrant North, had been lost. Now—especially if the Democrats hold the White House come 2021—the Virginia Right likes its chances. The key will be to navigate the Virginia GOP’s own fissures. Conservatives are seen as needing to nominate a person untainted by neoconservative associations, as vanquished 2017 nominee Ed Gillespie was, as well as one uncontaminated by white nationalism, as demolished 2018 senate nominee Corey Stewart was. Pete Snyder, an Alexandria businessman, and Nick Freitas, a Richmond-area delegate, are seen as the leading, early contenders.

In Richmond, the elite of this insular town are hoping to resume business as usual. Richard Saslaw, the Senate minority leader and the highest-ranking Democrat who has more or less stood by Northam, was at the Tobacco Company restaurant in the city’s chichi Shockoe Slip neighborhood on Tuesday night, holding forth as if all was normal. Some fret that this has damaged Terry McAuliffe, the state’s immediate past governor who wants to run for president. His biggest fans lament that it had already been a downgrade with Northam. “Terry would work until 2 a.m. Ralph goes to bed at 9,” a member of both of McAuliffe’s and Northam’s administrations told me. “A lot less life at the mansion.” Northam, should he stay the course, will doubtless continue to keep his head down.