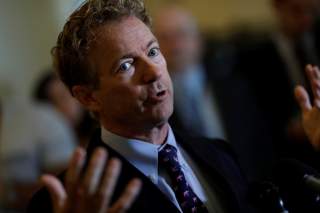 Sen. Rand Paul has never been diffident about stirring up controversy on foreign-policy issues within the Republican party. After he helped to filibuster John Brennan’s nomination as CIA director in March 2013, Sen. John McCain referred to him as a “wacko bird.” Paul was unruffled. “You know, I think he’s just on the wrong side of history, and on the wrong side of this argument, really,” Paul replied. Since then, he has become an increasingly prominent voice in the Senate. While other Senators may disagree with him, his willingness to go against the flow, at a moment when there is not a huge amount of debate on foreign-policy issues, does command the respect of a number of his colleagues and has allowed him to enjoy the spotlight.

For one thing, Paul has begun to take a higher profile on Russian issues, where his insistence that Washington engage in a kind of revived detente with Moscow echoes Donald Trump’s stance as well as that of the Republican base—a recent Gallup poll indicates that 40 percent of Republicans see Russia as either friendly or an ally. On this issue, Paul himself is clearly quite attuned to the base.

As part of his attempt to help push American foreign policy in a different direction, Paul, together with Texas State Senator Don Huffines, also visited Moscow this month, where he met with a variety of Russian officials and invited lawmakers to visit Washington. “I am pleased to announce that we will be continuing this contact,” Paul said. “We agreed and we invited members of the Foreign Affairs Committee [of the Council of Federation, the Russian parliamentary upper chamber] to come to the U.S. to meet with us in the U.S., in Washington.” Paul also delivered a letter from President Trump to Russian president Vladimir Putin. The White House said that Paul had requested the letter.

“Engagement is vital to our national security and peace around the world,” Paul said during his visit. “Today, I met with Chairman [Konstantin] Kosachev, and we agreed on the importance of continued dialogue. I invited the Russian Federation to send a delegation to the Capitol, and they have agreed to take this important next step.” Paul has previously advised that Russian president Vladimir Putin is never going to admit to 2016 election interference, and that it’s incumbent that the two nuclear powers move forward rather than remain mired in disputes.

On national security, Trump’s tightness with Paul is now paying dividends—for both sides. In addition to Russia, Trump secured Paul’s vote in favor of Mike Pompeo for secretary of State, even after a clearly-upset Paul had declared he would not vote for Pompeo or Gina Haspel at CIA. Paul’s vote against Haspel was a foregone conclusion, but on Pompeo, a pragmatic rising star, the president was able to get his way with the Kentucky senator, in exchange for Pompeo declaring he viewed the 2003 Iraq War a mistake. Speculation has raged in foreign-policy restrainer circles about what other concessions Paul might have privately secured. In the meantime, Paul has been an outspoken advocate of dialogue. Bank on seeing Paul back out in the public square as a major defender of the president should he follow through on seeking direct talks with Iranian president Hassan Rouhani—a move that would attract criticism from many in his own party.

And should Trump continue to buck the neoconservative establishment, discussion has swirled in recent days of an even larger role for Paul—in the cabinet or on the ticket. A source familiar with the matter says Trump has floated dumping Mike Pence before, for Texas Senator Ted Cruz. With this president, a day to day player, anything remains possible. But the August release of The Shadow President, a new book about Pence’s influence, is not welcome news for the vice president. Trump resents any implications that he’s not in charge: a February 2017 Time cover of Stephen Bannon and discussion that he was the second most powerful man in the world, if not the first (said SNL), helped doom the former Breitbart chief in the West Wing.

A larger portfolio, no matter what it is, for Rand Paul is welcome news for many of his friends and allies, regardless—and potentially a boon to the restrainer foreign-policy community. For many, it’s the realization of the kind of administration many of this ilk hoped Trump would oversee from the start. Rep. Thomas Massie, a close ally of Paul, noted at conference put on by The American Conservative in November 2016 that unlike most of Congress, Trump had not been his last pick of the major candidates in the primary: “Well I’ll tell you he wasn’t my seventeenth pick. . . . There were really only two candidates who were in favor of not going into another war,” Paul and Trump.

Other signs of Paul’s influence abound. Don McGahn, White House counsel, is an ally of many of Rand Paul’s contacts and associates. McGahn was able to secure his top choice, Brett Kavanaugh, for the Supreme Court, as I’ve reported. The Trump White House continues to prepare to lay siege to the administrative state, an issue where Kavanaugh, if seated, will be a staunch ally, as The Washington Post reported Monday. The unelected fourth branch of government is a favorite target of Paul’s and gives him common cause with populists like Bannon.

The House Freedom Caucus, the membership of which Paul is close to, has long been open to the Trump insurrection in the GOP. The libertarian, small government bent of the HFC has often conflicted, however, with the populist impulses of the president and many in his orbit. Paul, like economic pointman Larry Kudlow, helps square that circle. The coup de grace would be the installation of former HFC member Mick Mulvaney, now Trump’s budget man, as chief of staff, as I’ve reported. But that will likely have to wait until after the midterms, or even re-election. Should it come to pass though, look for Mulvaney, and particularly his allies, to attempt to funnel restrainers into national security positions.

Not everyone in this cohort is comfortable with an alliance with the Trump White House. Libertarian Congressman Justin Amash, more ideological in practice than Paul, is increasingly distancing himself from the White House.

But as many are running away from this president, it’s telling that Paul and others are running toward him. Are American politics about to be convulsed by Donald Trump and his anti-establishment instincts once more?