Rand Paul Goes to War against Pompeo and Haspel 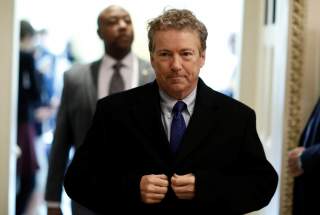 Sen. Rand Paul appeared on the Hill Wednesday to hold an extraordinary press conference. Not only would Paul announce his opposition to Mike Pompeo as secretary of state and Gina Haspel as CIA director, but he also attacked their selections in the most specific terms possible.

“I think it goes against most of the things President Trump campaigned on,” the senator told gathered reporters. “It perplexes me that he is now nominating, for secretary of state, someone who has advocated and pushed for regime change in Iran.” Coupled with Paul’s condemnation of Trump for bringing on “crazy neocons” to staff his administration, it amounted to a Fort Sumter moment for the GOP. Paul is calling out the president not only for failing to deliver on his campaign promises, but for delivering the very opposite: a neocon restoration.

My reporting on Tuesday and President Trump’s own statement indicated that Iran, and Trump’s continual loathing of the Obama-negotiated Iran nuclear deal, was a major impetus for the change-up at Foggy Bottom. “I agree with Rand Paul that someone who favors war with Iran over diplomacy should not be heading the State Department,” says Scott McConnell, founding editor of The American Conservative. McConnell supported Trump for president. “Trump’s opposition to the Iran deal is the weakest part of his presidency; during the campaign, he seemed skeptical of neoconservatism (and their Iraq war project) so it’s really disappointing to see him moving in their direction.” Paul also approvingly mentioned Trump’s stated opposition to the Iraq mission.

Paul then laid into Haspel, reading a account on her from one her former colleagues on her time heading a CIA black site prison in South Asia shortly after the September 11, 2001 attacks. The senator unflinchingly called the conduct she oversaw “torture.”

“The quote says that Gina Haspel said, ‘Good job. I like the way you’re drooling. . . . It adds to the realism. I’m almost buying it. You wouldn’t think a grown man would do that,’” Paul quoted, before adding: “When you read that. Sort of the joyful glee at someone who is being tortured. I find it just amazing that anyone would consider having this woman at the head of the CIA.”

Speculation abounded Tuesday, when Rex Tillerson was ousted, on whether Paul would take this step. The senator recently spoke at the Center for the National Interest, and published an eloquent piece in this publication: Washington Must Move beyond the Old Foreign Policy Consensus. He was the only Republican to oppose Pompeo for CIA director, a nomination many Democrats supported. “Rand will not be happy,” a source familiar with his thinking told me yesterday. “He and his dad [former Congressman and presidential candidate Ron Paul] can’t stand the torture stuff.”

Senator Paul is not alone in the foreign policy restrainer community in his concern. Pompeo “is a hawkish ideologue who has advocated regime change in Iran, among other insane policies. . . . If anything, he will encourage Trump's worst instincts. His move to State is based more on his personal compatibility with the president than his ability to serve U.S. interests,” says John Glaser of the CATO Institute.

And Paul joins those like McConnell, who supported Trump, in his alarm. Scott Greer, an editor at The Daily Caller, pointed to a laudatory tweet on Pompeo from Sen. Lindsey Graham. “This is not a good sign.” Ryan Girdusky, a Trumpist political consultant and journalist, pointed to quick praise of Pompeo from UN Ambassador Nikki Haley, tweeting: “All you need to know about Mike Pompeo . . . Tillerson was the only one stopping Haley’s saber rattling.”

For the White House, this could matter: they face a potentially unified Democratic opposition to their nominees, Paul’s ire and the likelihood that an ailing John McCain will not travel back to Washington to vote. That would leave the GOP with forty-nine votes.

“Maybe a Manchin?” says an aide to a senior Democratic senator, on where the Republicans could pick up another vote, referring to the moderate West Virginia senator running for reelection in perhaps the most Trump-friendly state in the union. “Haspel could be in trouble. Pompeo will probably survive because he already survived the CIA nomination.”

But not everyone is down on the Pompeo and Haspel nods. Following Paul’s press conference, the White House quickly released a lengthy list of statements hailing the Pompeo nod from a chorus of blue chip Republican Congressman and Cabinet members, including Mitch McConnell, Paul Ryan, Tom Cotton, Steve Scalise, Marco Rubio, Trey Gowdy, Haley and Mick Mulvaney. Earlier in the day, the White House emailed reporters about “Mike Pompeo’s distinguished career as CIA director.”

Andrew J. Bacevich, a scholar and historian at Boston University, who usually takes a deeply skeptical line on U.S. foreign policy, is more muted on the merits of the nomination, but envisions an immediate conflict between Trump and his new top diplomat, if confirmed. Some reports have indicated that Tillerson was ousted over disagreements with president on how to approach the North Korea negotiations.

Bacevich thinks the contrast with Pompeo could be more extreme: “He’s on the record as proposing regime change in North Korea. His boss is eager for a grip-and-grin with Kim Jong Un.” He adds: “How Pompeo resolves or deflects this obvious difference of opinion will provide an early test of his diplomatic savvy.”