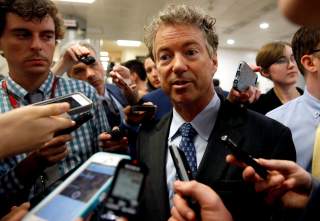 What kind of job can you have where you are consistently wrong, yet get to still go on TV talking endlessly and making more wild predictions that will no doubt lead to the same failed result?

Being a neocon means never having to say you’re sorry, even trillions of dollars and decades into doomed wars.

Famously, the neocons have told us that we would be greeted as liberators in Iraq. The thousands of American soldiers killed or wounded might argue otherwise. The architects of the Iraq war forgot to tell us that it would embolden Iran and give Iran a new ally in the ‘liberated’ Shia majority in Iraq. They forgot to tell us that it would tip the balance of power in the Middle East and encourage Saudi Arabia to go on a military buying spree and become the third largest purchasers of weapons in the world.

The neocons told us that the Arab Spring would bring Western-style democracy to the Middle East. They told us toppling Muammar el-Qaddafi would bring freedom and stability. They were wrong and instead of stability the overthrow of Qaddafi brought chaos. They failed to understand that the chaos of Libya would become a breeding ground for terrorism.

The neocons loudly announced that regime change in Syria was their goal. Yet, even Hillary Clinton realized the problem when our arms, as well as Saudi and Qatari arms, were getting delivered in the hands of ISIS. In one of the Wikileaks emails, Hillary warned Podesta: “the governments of Qatar and Saudi Arabia . . . are providing clandestine financial and logistic support to ISIS and other radical groups in the region.”

And yet, the deliveries of Western arms to jihadists went on and on for years.

Despite the evidence that many of the fighters opposing Assad were jihadists with an equal hatred for Israel and the United States, the weapons kept flowing.

Remember their call to arm the “moderate fighters?” Who can forget the $260 million spent to train sixty fighters, ten of whom were captured only minutes after they were sent into battle.

The neocons vociferously argued that Assad must go. Senators McCain and Graham argued that you couldn’t defeat ISIS without also defeating Assad. John Bolton went so far as to pontificate that "defeating the Islamic State" is "neither feasible nor desirable" if Assad remains in power. Actually, the opposite was true. Only when the mission changed from removing Assad to attacking ISIS did the tide finally turn.

Max Abrahms and John Glaser wrote in the LA Times late last year that contrary to neocon dogma, ISIS “imploded right after external support for the ‘moderate’ rebels dried up.”

So, the neocons who argued that ISIS couldn’t or shouldn’t be defeated without first defeating Assad were wrong again.

In the 2016 presidential primary two candidates—myself and Donald Trump—declared that the Iraq War was a mistake, that we should not arm our enemies and that America didn’t have a dog in every fight.

I campaigned against the folly of recent neocon wars, the futility of nation building, and the bankruptcy, moral and literal, of the idea of policing the world. So did Donald Trump—for the most part.

So where do we go from here? Congress is still dominated by neocons. The Trump administration shows no sign of ending the Afghan war. If anything, President Trump has doubled down on our support for Saudi Arabia in the Yemeni civil war. Candidate Trump, who consistently voiced his displeasure with the Iraq War, has surrounded himself with generals still intent on finding military solutions where none exist.

The irony is that the neocons are the TRUE isolationists. The neocons wish to isolate and forbid trade with regimes that they disapprove of. The neocon policy toward Cuba is the very definition of isolationism.

For over half a century, we’ve had an embargo with Cuba. Not only did the Castros survive it, but they milked it for everything it was worth. The Cuban government stoked the flames of nationalism in Cuba and blamed America for anything that went wrong, rather than the true culprit—their own dogmatic socialism.

The isolationist neocons want to continue this embargo. They want to peel back the small diplomatic gains that have been made. They want to pare back cultural exchange and dialogue.

The opposite, free travel and trade, is what is needed.

Our founders understood the perils of perpetual war.

John Quincy Adams echoed and summed the spirit of the foreign policy of our founders when he said:

America goes not abroad in search of monsters to destroy. She is the well-wisher to the freedom and independence of all. She is the champion and vindicator only of her own.

Far from being isolationist, the foreign policy of our Founders is the true engagement. To seek honest friendship, free commerce, open dialogue and peaceful engagement with all who are willing.

We do not seek to retreat within our borders—nor do we seek to expand them.

We do not seek a wall to keep everyone out, nor to keep anyone in.

Too often the United States has attempted to till the soil in foreign lands with our bombs and plow it with our tanks.

Instead, we should seek to help others till their land with our tractors and reap their harvest with our combines.

The neocons argue that Americans want a more robust foreign policy. Maybe, but at the same time, Americans have also been increasingly clear that they are tired of constant war.

Reagan had it right when he said “our reluctance for conflict should not be misjudged as a failure of will.”

In fact, restraint is a triumph of will.

After the debacles of Iraq and Libya, after becoming weary of a drawn-out mission in Afghanistan, the American people are looking for a new path for foreign policy.

America should steer clear of other countries civil wars, such as Yemen.

We should not be in wars where the best outcome is stalemate, as we are in Afghanistan.

And America shouldn’t fight wars that are not authorized by Congress.

Admittedly, the War on Terror is not over, but any military action must be judged by this question: will this use of force kill more terrorists than it creates?

Refueling Saudi bombers mid-air and supplying them with bombs that are dropped on a funeral procession is exactly the kind of misguided policy that creates more terrorists than it kills.

To defend our country properly, we must understand that while there are those that hate our values, military interventions aimed at changing that at the point of a gun—or the blast radius of a bomb—may well exacerbate this hatred rather than end it.

We need a foreign policy that recognizes its own limits, a common sense realism of strength, limited action, full diplomatic engagement and free trade.

Here’s how I see the most important principles of this foreign policy.

First, the use of force must always be on the table, but rarely used. War should be the last resort, not the first.

War is necessary when America is attacked or directly and clearly threatened, and when we have exhausted all measures short of war.

The second principle is that Congress, the people’s representative, must authorize the decision to intervene.

The most serious decision we make as a nation is to send our sons or daughters to war. We should make it together, and we should vote on it.

Finally, how do we solve non-military challenges in places like Asia and Eastern Europe?

Hysteria over election-meddling threatens to reignite the Cold War.

Russia, at times, is our adversary, but it need not be our permanent enemy.

Whether it is the threat of ISIS, or the situations in Iran and Syria, it would be in our interest to work together with Russia where possible, yet this opportunity is slipping by. Obsession with Russian “collusion” or other conspiracies involving the Kremlin and the administration have frozen the narrative and hampered what I believe to be the president’s good instincts on the proper relationship with Russia.

Before I close, let me talk about the last piece of the puzzle for a strong foreign policy—our own economic strength.

Adm. Mike Mullen properly noted that the biggest threat to our national security is our debt.

A bankrupt nation does not project power, but weakness.

Our overseas adventures are causing us to be stretched thin, and Republicans have pushed for, and received, a massive military spending increase.

Despite Congressional hostility, I have asked the question: is our military budget too small or is our mission too big?

I believe, without question, it is the latter. Our mission has become too large. Years after completing our mission in Afghanistan, America remains—spending $50 billion a year nation-building. We are adding debt at nearly $2 million per minute.

If we’re not careful, we will spend our way into second-tier nation status quickly.

If the long war is to ever end, we must understand what must take its place.

It isn’t just religion, nor even abject poverty, that motivates those seeking a better life. It is often the simple idea of freedom that we in the west take for granted.

Mohammed Bousazizi, the Tunisian street merchant who set himself on fire and began the Arab Spring, was an aspiring entrepreneur foiled by an overbearing government.

He had a dream. He’d save for a truck, and he’d sell his wares on the streets to build a life.

Cronyism and overbearing government stifled his dream. He set himself on fire, and the flames are still burning.

My great grandfather came to America with a dream not unlike Bousazizi’s. He peddled vegetables until he saved enough to purchase a truck, to become what was then logically called a truck-farmer. Over time he was able to purchase a home, then a small bit of land.

My grandfather didn’t need a permit or a license. No government hindered his success.

Peruvian economist De Soto spoke to Bousazazi’s father and asked him if he left a legacy. He replied, “Of course, he believed even the poor had a right to buy and sell.”

To trade one’s labor and products is also a fundamental right.

Strangely, neocons and libertarians likely agree that government should largely leave us free to pursue our dreams. Neocons, however, feel some universal calling to liberate humanity. Libertarians want the same liberty for individuals across the globe but think that ‘spreading liberty’ through perpetual war can only occur with a big government that tramples individual liberty.

When you boil it all down, the dilemma is whether liberty spreads best by persuasion or force.

This was the great battle fought between William F. Buckley and Murray Rothbard in the early 1960’s. Everyone thinks Buckley’s National Review won hands down. And yet, Buckley himself ended up doubting the wisdom of the Iraq War.

The schism that divides neocons and libertarian realists will heal when the neoconservatives finally acknowledge that a government big enough to “make the world safe for democracy” is inconsistent with individual liberty.

When neoconservatives accept that a government large enough to fight perpetual war requires taxes and debt so extensive as to be to inconsistent with individual liberty—then will the schism heal.

When that time comes, libertarians and neoconservatives will gather in Williamsburg and raise a pint to our common heroes: Jefferson, Paine, Madison, and yes, even John Adams. That will be a glorious time, a time when liberty is no longer divided and we can all celebrate the great American experiment in Liberty.