Rand Paul Is No "Flip-Flopper" 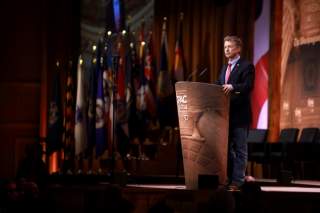 The word that should terrify Rand Paul is not “isolationist,” despite reams of conventional wisdom to the contrary. It is “flip-flopper.”

Paul’s many critics are trying to affix the label that bedeviled Mitt Romney to the Kentucky senator’s evolving position on U.S. military intervention against the Islamic State in Iraq and Syria (ISIS).

The likely 2016 Republican presidential candidate has gone from emphasizing the role past U.S. interventions have played in unleashing jihadists and pleading for caution to pledging—or appearing to pledge—“to destroy ISIS militarily.” Reporters were quick to pounce.

The Washington Post’s Jennifer Rubin, writing with the restraint for which she is famous, called it “Rand Paul’s remarkable metamorphosis”: he “has decided that if you can’t beat the ‘neocons’ he might as well join them.” BuzzFeed’s Andrew Kaczynzki prefers, “Rand Paul is basically throwing shit at the wall and seeing what sticks.”

Some of this is unfair. First, it is simply indisputable that regime change in Iraq set in motion the chain of events that ultimately allowed ISIS to thrive. While that suggests we should be reluctant to reengage in Iraq, it doesn’t logically end the discussion any more than opposition to arming the Afghan mujahedeen in the 1980s necessitated being against intervening in Afghanistan after 9/11.

Second, the isolationist canard has made some assume that anytime Paul takes a position inconsistent with functional (or in Richard Epstein’s telling, “fatal”) pacifism, he is flip-flopping. But he is neither a pacifist nor an isolationist if those words have any meaning other than as pejoratives, which means it is no surprise there are realistic conditions under which he would advocate the use of military force.

Finally, Paul’s position on ISIS really isn’t so inscrutable or unreasonable. He favors a limited U.S. military role, mainly involving airstrikes. He would prefer that most of the fighting and heavy lifting be done by governments in the region, so we neither end up enmeshed in a civil war nor further empowering regimes like Iran or Syria, bad actors that are less immediately threatening to America than Sunni jihadists.

Paul’s general foreign-policy pitch is this: he thinks the establishments of both major parties are too quick to resort to military force, but he wants to reassure voters that he is not so dogmatic that he would not do what’s necessary to keep the country safe.

That’s not to say that Paul has yet found the right balance in terms of substantive policy, and he certainly hasn’t perfected the rhetoric for communicating this basic message. If anything Paul is too conscious of the immediate reaction to his trial balloons, overthinking to the point of outsmarting himself. This was clearly the case with regard to aid to Israel, where his apparent disavowal of his past position invited flip-flopping charges. He has occasionally done this on other issues like immigration. These are the pitfalls of unscripted candidates, but it’s especially dangerous to Paul’s reputation.

While Paul has gained support across the political spectrum, his opposition is similarly diverse. The establishments of both parties dislike him. He has both conservative and liberal detractors, with liberal hawks especially eager to read him out of polite society. There are even libertarians who see him as less pure than his father—plus a few who thought his father wasn’t sufficiently pure—and dislike involvement in either the Republican Party or practical politics.

In addition to the many camps with a vested interest in Paul’s failure, much of the media has had little past exposure to anything approaching noninterventionism. It just isn’t in the vocabulary of many reporters, including some who are genuinely trying to be fair, attempting to parse his statements now.

As for Paul himself, he should keep triangulating between a president who is seen as weak and congressional Republicans who want a broad authorization of military force that would go far beyond ISIS. But he must find a message that is consistent.

A version of that message might be: the United States will remain vigilant and do what it must to prevent the growth of a jihadist state with the potential to threaten America. But we will learn from the mistakes of the past and will not referee other countries’ civil wars. A smaller military footprint, but not a nonexistent one.

There’s a word for a strong but prudent and judicious approach: conservative.