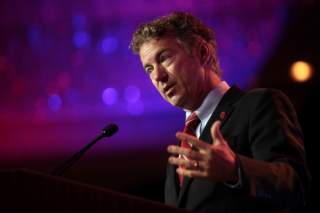 The Republican presidential candidate is burdened by a family dynasty. When it comes to economics and foreign policy, its legacy is intensely controversial in the Republican Party. Now he’s trying to present himself as his own man.

This might sound like former Florida Governor Jeb Bush, but it also describes Kentucky Senator Rand Paul. Paul has grown up in the cradle of libertarianism, the son of a father who has been seen as the savior of the movement for decades, both as a Congressman and presidential candidate. To distinguish himself from his father, Paul has been modulating his positions in the past few months, prompting his interviewers to query him about whether or not he is a flip-flopper.

If his recent appearances are anything to go by, Paul is bristling at those queries. “Today” show Savannah Guthrie was the latest recipient of Paul’s verbal chastisement on Wednesday. After she pointed out that he had once held what were commonly viewed as “unorthodox” positions, but that he had “seemed to change over the years,” Paul flipped out over the accusation of flip-flopping. “Listen, you’ve editorialized,” he said.

Well, yes. That’s what the press does. As well as asking probing questions. It’s called doing your job.

So if this tempestuous exchange is anything to go by, candidate Paul is in for some rough sledding over the next year or so. He doesn’t seem to have learned much from the brouhaha that surrounded his telling CNBC anchor Kelly Evans to “calm down” in February. No doubt attacking the media is a conservative tactic that can work—up to a point. But if Paul is going to treat each encounter with the media as an occasion to instruct reporters on how to question him appropriately, he’s going to appear increasingly peevish.

Indeed, it raises the question of whether Paul should be running at all. Something has gone awry in America when running for president becomes an end itself. When Richard Nixon ran for president in 1960, Dwight Eisenhower, asked to name some of his achievements, cracked “if you give me a week, I might think of one.” But Nixon had in fact compiled a substantial record—cracking the Hiss case, serving as a Senator, and substituting for Eisenhower when he experienced serious health problems in 1955, 1956, and 1957.

But Eisenhower’s remark does have a certain pertinence as a bevy of senators seem to view Barack Obama as the model for running for president. And so, in only a few years Paul has gone from entering to viewing himself as presidential timber. In fact, if a recent Politico essay is correct, Paul has long viewed himself as a potential occupant of the White House.

But how to get there? The answer, as far as the Paul camp is concerned, seems to be to cobble together a disparate coalition heretofore unseen in the Republican party and call it the brand new thing, the future, the path that the party must follow or risk falling into political oblivion. But this is bravado rather than a convincing plan.

It’s hard to imagine that Republican primary voters are going to cotton to his message of anti-interventionism abroad. He’s trying to camouflage it by calling for more defense spending and arguing that nation-building abroad isn’t the way to go. But if Robert O’Brien, writing in the National Interest, is correct that Brett Stephens’ new book is required reading for Republican presidential candidates, then the Paul foreign policy smorgasbord is likely dead on arrival.

At the same time, the more Paul tempers his libertarian program, the more he risks antagonizing his base. What may appear as a reasonable political calculation to him could savor of opportunism to ardent libertarians who aren’t inclined to cut him as much slack as he would like. His tergiversations on foreign aid, defense spending and Iran’s nuclear program have hardly gone unremarked.

For all his aversion to the press, however, the sentiment is not reciprocated. The Washington Post’s Aaron Blake observed, “If nothing else, the way Rand Paul's first day on the trail as a presidential candidate ended demonstrates that, while at times thin-skinned and unapologetic, he's still going to be a fascinating candidate to watch.” The more Paul loses his temper, the more gleeful the media will become.

A Paul campaign may be entertaining but becoming a figure of ridicule hardly seems like a promising roadmap for capturing the presidency.