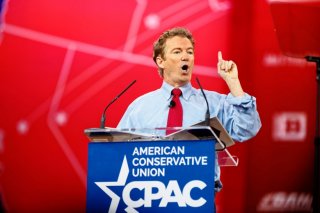 Senator Rand Paul, the junior senator from Kentucky, rode into the Senate chamber in 2010 on a Tea Party movement that took U.S. politics by storm and caused considerable concern among the mainstream Republican rank-and-file. Although he’s only been in the Senate for a little over four years, Rand Paul has acquired a great deal of national recognition. Paul has a number of good attributes as a politician. At fifty-two years old, he’s relatively young as far as Washington goes.

Yet as he prepares for his likely presidential campaign next month, Rand Paul continues to say and do things that won’t help win over Republican voters during the primary season. Nearly a year ago, I wrote that Sen. Paul was a GOP candidate that “sounded presidential” on matters of foreign policy—in particular regarding the nuclear negotiations with Iran, in which he has been far more willing than his fellow Republicans in Congress to support the Obama administration’s strategy. I’m not so sure that label applies anymore.

During his swing trip to New Hampshire last weekend—a state that has a prime libertarian streak and voted in quite hefty numbers for the elder Paul, Ron, in 2012—Rand managed to upset one of Washington’s longest allies in the Middle East with a statement that was originally intended to hit Hillary Clinton for accepting contributions to her family’s foundation from foreign governments.

Hillary Clinton, the presumptive Democratic presidential nominee for 2016, should not be taking money from governments that abuse the rights of women, Paul said in his speech. “In countries that stone people to death for adultery and imprison people for adultery,” commented Paul, “this is the kind of thing you would think someone for women’s rights would be standing up against, instead of accepting thinly veiled bribes.”

If Rand stopped himself there, the reporters traveling with his entourage in New Hampshire would have likely taken it as rhetorical jabs at Hillary Clinton, the front-runner in the upcoming presidential race. But the senator from Kentucky couldn’t restrain himself; the very next day, he went a step further by suggesting that the United States should not be dealing with Saudi Arabia at all because of Riyadh’s terrible human- and gender-rights record. In fact, Paul used the word “boycott,” a term that Americans usually equate with regimes like Cuba and Iran—not Saudi Arabia, the biggest crude-oil exporter in the OPEC club and a country that Washington is using to effectively claim that the Sunni Arab world is endorsing its military strategy against the Islamic State. In Rand’s own words: “Remember when South Africa was misbehaving? We organized a boycott of South Africa. We should be boycotting Saudi Arabia and not taking money from Saudi Arabia’s government.”

This isn’t the first time that Paul has made his life more difficult. Indeed, it seems that whenever he has momentum or is getting good coverage, the senator manages to say or do something that halts his momentum or enables Republicans in the all-important establishment to regard him as a simpleton or an isolationist. In 2011, Paul released an alternative budget proposal that would have eliminated U.S. foreign aid entirely, including to countries that have received financial and military support from the United States (like Israel and Egypt) for four decades. That decision caught a lot of lawmakers as a juvenile attempt to address Washington’s budgetary and deficit woes, and it forced Sen. Paul to essentially backtrack and spend the next several years of his career assuring pro-Israel donors and activists that he was solidly committed to the U.S.-Israel strategic relationship. Paul has introduced two pro-Israel pieces of legislation over the past eleven months to prove that point—both of which would prohibit all U.S. assistance to the Palestinian Authority government if Ramallah did not meet a series of demands, including ceasing its campaign to join the International Criminal Court.

The “boycott Saudi Arabia” line is in the same mold as Paul’s earlier stance on U.S. foreign assistance. It may be truly what he believes, but it’s not good politics to win a Republican primary contest—nor is turning relations on their head with a key Arab power in the Middle East a smart move for a future commander-in-chief to make.