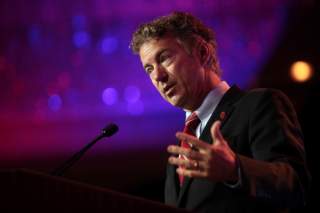 Editor’s Note: The following is the prepared text of a speech by Senator Rand Paul delivered in New York City at the Center for the National Interest’s annual dinner on October 23, 2014.

Thank you. It’s an honor to be at the Center for The National Interest.

Immediately before the fall of the Berlin Wall, Francis Fukuyama wrote that we are at “the end of history.”

The world, Fukuyama argued, had arrived at what he called the universal triumph of “Western liberal democracy as the final point of human government.”

Almost 25 years later, we know Fukuyama was either wrong or, at the very least, a bit optimistic.

History has not ended.

In East Asia, Beijing extols the remarkable rise of China as the supremacy of a one-party state capitalism.

In the Middle East, secular dictatorships have been replaced by the rise of radical jihadist movements, who in their beliefs and barbarity -- represent the antithesis of liberal democracy.

These challenges are in part consequences of failing to define our national security interest in a new era.

Our allies and our enemies are unsure where America stands.

Until we develop the ability to distinguish, as George Kennan put it, between vital interests and more peripheral interests, we will continue to drift from crisis to crisis.

Today I want to share with you my views on how to address these threats and how I see America’s role in the world.

I want to spell out for you what I believe to be the principles of a national security strategy of strength and action.

Americans want strength and leadership but that doesn't mean they see war as the only solution.

Reagan had it right when he spoke to potential adversaries: "Our reluctance for conflict should not be misjudged as a failure of will.”

After the tragedies of Iraq and Libya, Americans are right to expect more from their country when we go to war.

America shouldn't fight wars that aren’t authorized by the American people, by Congress.

America should and will fight wars when the consequences….intended and unintended….are worth the sacrifice.

The war on terror is not over, and America cannot disengage from the world.

President Obama claims that al Qaeda is decimated.  But a recent report by the RAND Corporation tracked a 58 percent increase over the last three years in jihadist terror groups.

To contain and ultimately defeat radical Islam, America must have confidence in our constitutional republic, our leadership, and our values.

To defend our country we must understand that a hatred of our values exists, and acknowledge that interventions in foreign countries may well exacerbate this hatred, but that ultimately, we must be willing and able to defend our country and our interests.

As Reagan said: “When action is required to preserve our national security, we will act.”

Will they hate us less if we are less present?

Perhaps….but hatred for those outside the circle of "accepted" Islam, exists above and beyond our history of intervention overseas.

​The world does not have an Islam problem.

The world has a dignity problem, with millions of men and women across the Middle East being treated as chattel by their own governments.

Many of these same governments have been chronic recipients of our aid.

When the anger boils over as it did in Cairo, the anger is directed not only against Mubarak but also against the United States because of our support for Mubarak.

Some anger is blowback, but some anger originates in an aberrant and intolerant distortion of religion that wages war against all infidels.

We can’t be sentimental about neutralizing that threat, but we also can’t be blind to the fact that drone strikes that inadvertently kill civilians may create more jihadists than we eliminate.

The young activist Malala Yousafzai, whom the Taliban in Pakistan shot in the head at point-blank range for insisting that girls have the right to attend school, voiced this concern when she met with President Obama.

She said: “It is true that when there’s a drone attack…terrorists are killed.  But 500 and 5,000 more people rise against it and more terrorism occurs.”

The truth is, you can’t solve a dignity problem with military force. It was Secretary Gates who warned that our foreign policy has become over-militarized.

Yes, we need a hammer ready, but not every civil war is a nail.

There is a time to eliminate our enemies, but there is also a time to cultivate allies and encouragers among civilized Muslim nations.

Those of you who are familiar with me know that I deeply believe in individual liberty.

But I have learned through experience that this ideal can only be achieved by recognizing, as Bismarck said, that, policy is the art of the possible.

We need a foreign policy that recognizes our limits and preserves our might, a common-sense conservative realism of strength and action.

We can’t retreat from the world, but we can’t remake it in our own image either.

We can’t and shouldn’t engage in nation building, but we can facilitate trade and extend the blessings of freedom and free markets around the world.

Here’s how I see the most important principles that should drive America’s foreign policy.

First, the Use of Force is and always has been an indispensable part of defending our country.

War is necessary when America is attacked or threatened, when vital American interests are attacked and threatened, and when we have exhausted all other measures short of war.

While no foreign policy should preclude the use of force, Reagan understood that war should never be the first resort.

Eisenhower understood this also when he said, “Belligerence is the hallmark of insecurity.”

The war in Afghanistan is an example of a just, necessary war. I supported the decision to go into Afghanistan after 9/11.

I still do today.

America was attacked by Al Qaeda, and there was a clear initial objective: dismantle the Taliban, and deny Al Qaeda safe haven.

The invasion showcased the best of modern American military strength and ingenuity: we went in with Special Forces and heavy air power, and formed critical alliances.

The Taliban were ousted from power, and Al Qaeda fled. We kept a limited force in Afghanistan to wage counterterrorism and we understood, at first, the limits of nation building in a country decimated by over 30 years of constant war.

​Only after our initial success did the lack of a clear objective give rise to mission creep.  Today Afghanistan is more violent than when President Obama came into office.

He deployed another 50,000 troops, nearly doubling our forces in Afghanistan, and added $120 billion dollars to the deficit.

And yet, the results are discouraging. The leading cause of death among our soldiers now comes from enemies disguised in the uniforms of our allies.

1,422 troops have died since President Obama ordered the surge.

We have now spent more money in Afghanistan than we did for the Marshall Plan and yet after the killing of Bin Laden and the toppling of the Taliban, it is hard to understand our exact objective.

Stalemate and perpetual policing seem to be our mission now in Afghanistan, Iraq, and Syria.

A precondition to the use of force must be a clear end goal. We can't have perpetual war.

A second principle is that Congress, the people’s representative, must authorize the decision to intervene.

A critical component of this doctrine is support from the American public.

The Libyan war was fought without the approval of Congress or the American people.

President Obama claimed our military was “being volunteered by others to carry out missions” in Libya.  He fundamentally misunderstands our Republic.

Let me be very clear:

The war in Libya was not in our national interest. It had no clear goal and it led to less stability.

Today, Libya is a jihadist wonderland, a sanctuary and safe haven for terror groups across North Africa.

Our Ambassador was assassinated and our Embassy forced to flee over land to Tunisia.  Jihadists today swim in our Embassy swimming pool.

The Obama administration, urged on by Hillary Clinton, wanted to go to war but didn't anticipate the consequences of war.

Libya is now more chaotic and America is less safe.

War should not be a unilateral decision taken in the isolation of the White House. But that is what happened.